Akron defeated Kent State on Friday, but fell to Ohio University on Saturday at James A. Rhodes Arena to begin conference play. 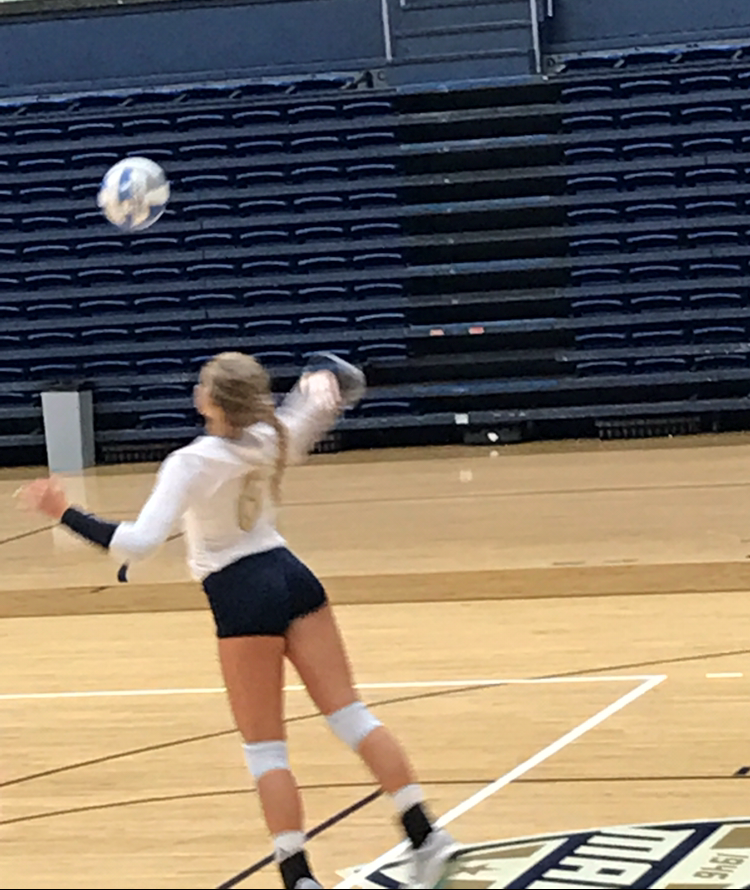 Left side hitter Kayla Gwozdz serving for the Zips this weekend against Kent State.

The Zips opened up Mid-American Conference play against Kent State and Ohio University at home this weekend. Akron Volleyball split the two matches on the weekend, defeating the Golden Flashes in the Crystal Clinic Wagon Wheel Challenge on Friday.

Despite scoring 25 points in the first set, the Zips fell 25-27 to the Flashes. After eleven attack and service errors for the Zips, combined with two service aces and five kills from outside hitter, Kelsey Bittinger, for Kent State, put the Zips behind the 8-ball early in the match. Bittinger totaled 17 kills for the match.

Akron powered back in the second set, jumping out to a 7-3 lead. After the Flashes battled to keep it close at 13-10, the Zips offense ignited, going on an 8-2 scoring run and leading to the runaway 25-15 victory in set two for Akron.

The final two sets were highly competitive, back-and-forth battles to round out the match. Trailing 13-11 in the third set, the Zips utilized a 7-1 run and three consecutive attack errors by Kent State to take the lead and pull away, earning the 25-17 victory. Set four saw 11 tied scores, and six lead changes throughout the set. Trailing 23-21, the Zips took advantage of two consecutive attack errors by the Flashes, and seized the 25-23 victory with a service ace from setter, Emily Weigand, and a kill by outside hitter, Kayla Gwozdz.

Weigand recorded a match-high of five service aces, and a team-high of 33 assists for the Zips on Friday. Gwozdz led the Akron offensive attack with 12 kills and three service aces of her own. Middle blocker, Jessica Kloehn, and outside hitter, Elya Karsner, recorded seven kills apiece, and Abbey Pawlak and Taylor Sharrits led the way defensively with 15 and 12 digs, respectively.

As a team, a well-rounded offensive attack contributed to the Zips success. Akron outhit the Flashes .137 to .109, with six different players totaling five or more kills. The Zips also had the advantage over Kent State in service aces (14-6) and blocks (13-6).

The Ohio Bobcats hit at an incredible .486 percent, handily defeating the Zips in set one. Akron responded well in the second, getting off to an early 4-1 lead. An attack error fueled a 6-1 scoring run for Akron, and the Zips held their lead to earn the 25-18 set victory, evening up the match heading to the break.

Again on Saturday, sets three and four were incredibly competitive, with the Zips coming up just short (23-25) in each to end the match. In the third set, the Zips battled to force three tied scores, and even taking the lead 13-12. But with the score tied at 22, the Bobcats recorded two straight kills to put them at set point, and a kill from outside hitter, Lizzie Stephens, gave Ohio the set and the 2-1 advantage. After eight tie scores and three lead changes in set four, Ohio utilized a 5-1 scoring run to pull away from the Zips, and a final kill from middle blocker, Tia Jimerson, halted the Akron comeback effort, winning the match for the Bobcats.

Stephens recorded a match-high of 19 kills and Jimerson hit .609 for 16 kills of her own. Gwozdz, once again, led the Zips offensive attack by recording 13 kills, Karsner followed closely with 11. Middle blockers, Kloehn and Ashley Richardson recorded a match-high of five blocks apiece, and the Zips once again led the match with seven service aces.

After the weekend, the Zips’ record moves to 5-9 overall on the season, and now 1-1 in MAC play. Akron will be back in action on the road this week, taking on Buffalo on Thursday and Toledo on Saturday. Akron will return home on Friday, Oct. 13 to take on Western Michigan and then Northern Illinois the following day.