Akron handed Buffalo their first conference loss on Thursday, and fell to Toledo in a tight, five-set match on Saturday during the team’s first road trip during MAC play. 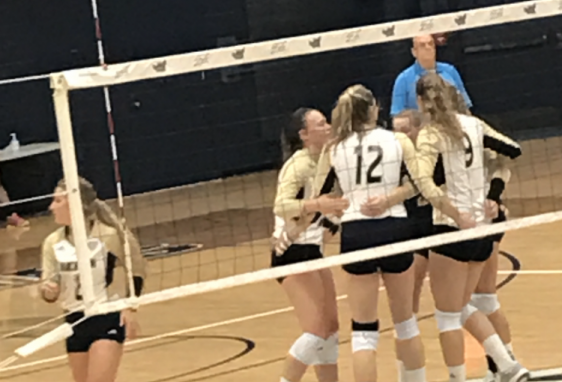 The Zips huddle following a point during a home match against Ohio.

After splitting a pair of matches at James A. Rhodes Arena last weekend to open Mid-American Conference play, the Akron volleyball team took to the road this week, traveling to Buffalo, New York and Toledo.

The Zips began their week on Thursday in Buffalo, taking on the Bulls who had not been beaten by a MAC opponent this season. Akron came out fighting, handing Buffalo their first conference loss of 2017 season during four sets (25-23, 18-25, 25-15, 27-25). With Thursday’s win, Akron has now defeated the Bulls in three consecutive seasons.

Akron managed to come out on top of a back-and-forth set; one that saw six different runs of three or more consecutive points by one team. The Zips ended the first set on a 15-7 scoring run, allowing them to get off to a quick 1-0 lead on the road.

The Bulls answered in set two, utilizing 12 combined kills from outside hitters Andrea Mitrovic and Paulina Prokudina in the set to power the Bulls to the 25-18 set victory. Mitrovic and Prokudina led the match with 18 and 16 kills, respectively.

Coming out of the break, the Zips were dominant in the third set, riding six kills from outside hitter Kayla Gwozdz to achieve a decisive 25-15 win.

The fourth and final set was highly competitive, as the two teams battled back-and-forth with the score being tied five times. With the Bulls answering nearly every Akron scoring run, the score was even at 25-25 late in the set. The Zips’ offense came through, with back-to-back kills from outside hitter Madi Baer and middle blocker Jessica Kloehn scoring the Zips’ last two points to secure the match victory.

UA’s head coach Tom Hanna stated after the match, “We had to overcome a number of uncontrollable situations tonight,” Hanna said. “We did a great job as a team to fight for a road MAC win.”

In Gwozdz’s absence early in the match, freshman, outside hitter Shelby Fulmer stepped in nicely, appearing in consecutive sets in a match for the first time in her career. Fulmer recorded her first career kill and totaled five kills on the match.

Gwozdz led the team with 13 kills but was followed closely by Baer and Kloehn who each had 10 kills. Senior defensive specialist, Aubrey Kozer recorded a match-high at 18 digs, and setter Emily Weigand managed a match-high at 39 assists.

After having Friday off to travel, the Zips returned to the state of Ohio to take on the Rockets in Toledo on Saturday. Toledo defeated the Zips in a nail-biting, five-set thriller (25-14, 21-25, 16-25, 25-21, 9-15), after handing Ball State their lone conference loss on Thursday.

After jumping out the early lead and battling back to force a fifth set after trailing 2-1, Akron could not hold down the Rockets offense in set five. With the score sitting at 5-5, Toledo went on a 5-0 scoring run, proving to be too much for the Zips to overcome in the fifth set, played to 15.

Gwozdz once again impressed, recording her second double-double of the season. Gwozdz recorded a match-high 19 kills to go along with single-game season highs in digs (16) and service aces (4). Baer registered 15 kills of her own, and Weigand totaled 47 assists.

Going 1-1 for the second consecutive week, the Zips are currently part of a four-way tie for second in the MAC East standings, with a 2-2 conference record (6-10 overall). Akron will be on the road again next weekend, taking on Miami (OH) and Bowling Green on Friday and Saturday. The Zips will return home to the JAR on Friday, Oct. 13, to face Western Michigan at 7 p.m. and Northern Illinois on Saturday, Oct. 14, at 5 p.m.