Zips Kick for the Cure 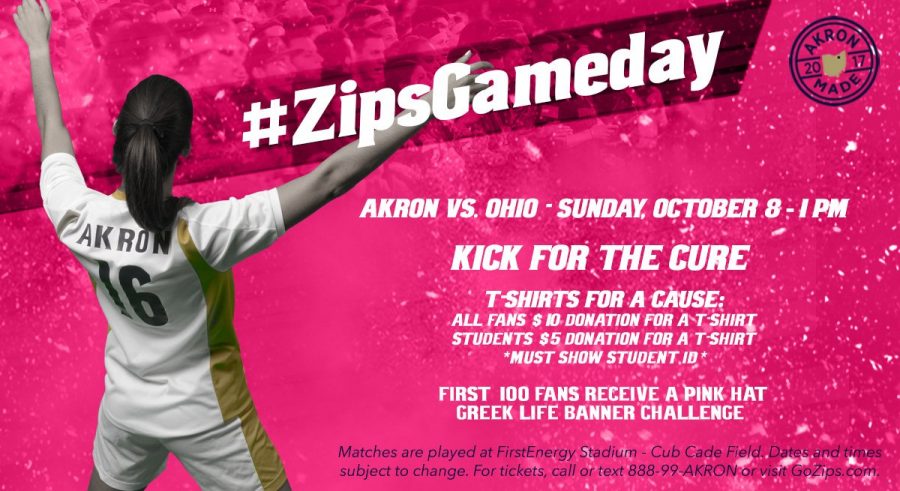 The University of Akron women’s soccer team will look for their second win of the season, following their 0-3 loss against school rival Kent State on Thursday night, Oct. 6. The Zips have yet to grab a victory since their game against Wisconsin Green Bay in August.

Kent’s Isabelle Mihail scored in the 17th minute from 15 yards out on an assist from Karli Paracca to put the Golden Flashes ahead. Kristen Brots scored in the 55th minute on a straight shot from 10 yards out off assists from Paige Culver and Vital Kats in order to give the Flashes a 2-0 lead. During the 53rd minute, Henderson-Muschett scored off a corner kick to secure the game win.

“We lost to a high-quality team tonight, but felt we did quite well in the first half,” said Head Coach Noreen Herlihy. “We conceded two goals in two minutes in the second half against the defending champions and it’s tough to come back from that. Having said that, the players never quit and gave it everything.  We will move on now and focus [on] our home game [this] Sunday.”

After being defeated by the Golden Flashes, the Zips season record will fall to 1-10-2 with dropping their MAC record dropping to 0-4-1.

The Zips will return to FirstEnergy Stadium-Cub Cadet Field on Sunday, Oct. 8, at 1 p.m. to play the Ohio Bobcats. Akron will host their annual Kick for the Cure in support of  Breast Cancer Awareness Month. The first hundred fans to enter the game will receive a free pink hat. Fans and students can also make donations in order to receive a shirt, $10 for fans and $5 for students.