Matt Kenyon Exhibit Stands on the Corner of Science, Art 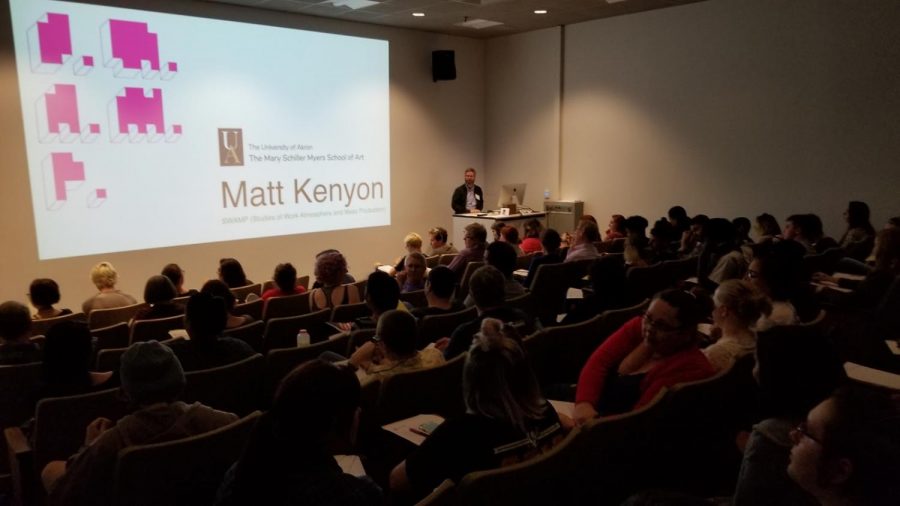 Artist Matt Kenyon presents a lecture in Folk Hall at The University of Akron,.

On Wednesday, Oct. 4, students, faculty, and members of the general public gathered inside Folk Hall at The University of Akron to hear a lecture by artist Matt Kenyon on many of his creations. Afterwards, attendees moved to the Emily Davis Gallery to view Kenyon’s exhibit. “Heatsink”, is on the upper level and the exhibit, “Altered States”, is on the lower level. “Altered States” features artists Christi Birchfield and Lauren Davies. Both exhibits are on display from Sept. 28 until Oct. 20.

Kenyon is an associate professor at the Rhode Island School of Design in the digital media program. This fall, he has shared his talent and expertise with students as the current artist-in-residence in The University of Akron’s Synapse series. Through various projects, events, and visitors like Kenyon, Synapse aims to provide a collaborative platform that connects art and science.

Synapse was created by Myers School of Art professor Matthew Kolodziej in 2007. The program is funded by the Knight Foundation, GAR Foundation, Callahan Foundation, and private donors. Over the years, partnerships with the Akron Zoological Park, The Biomimicry Research and Innovation Center, The E.J. Thomas Performing Arts Hall, and other organizations and institutions have brought to fruition an interdisciplinary dialogue on art that reaches beyond campus into the community. Kenyon’s artwork fits perfectly into this conversation.

The Myers School of Art hosted the Synapse lecture and a reception in Folk Hall to celebrate the opening of Kenyon’s “Heatsink” show. Kolodziej introduced Kenyon as a “new media sculptor” who takes “deep looks into issues about politics, commerce and biology.” Kenyon’s art has been shown around the world, including the Museum of Modern Art and at an exhibit at the ArtScience Museum in Singapore. He is also a TED Fellow and has been featured in Wired Magazine and Gizmodo.

As a resident artist, Kenyon is working with students in an intermediate drawing class and with intermediate and advanced sculptors on a project involving biological, political, and corporate systems. The results will be on display in a few weeks at Folk Hall.

Kenyon’s lecture began with an interactive quiz. First, he displayed pictures of the various flora which can be found in Akron and asked the audience to call out the names of the plants, flowers, and trees that they knew. What followed was a low but steady murmur of mostly unsure responses.

Then, Kenyon showed a piece, by artist Heidi Cody, titled “American Alphabet”. It depicts the English alphabet, from “A” to “Z”, using the first letter of popular named brand logos. Kenyon asked the audience to call out the brands they could identify. Immediately, a loud ruckus rang out as people went through each letter, confidently shouting out answers.

As the ensuing laughter subsided, Kenyon explained the purpose of the exercise. Each person in the world views the plant photos and the logos through their own perspectives. People throughout time and space recognize the images with varying degrees of familiarity. Art can play with that sense of familiarity. Kenyon said, “[art] can show us the familiar world in all of its strangeness. So it can make the familiar seem strange and have us take notice of it.”

Using images and clips from the 1933 film, “The Invisible Man”, Kenyon highlighted the invisible nature of that which is deemed familiar. For him, the story in the film serves as a narrative about power. Like the scientist in the film who wreaks havoc while invisible or the plants and the products, Kenyon said that power is ubiquitous and “[it’s] difficult for us maybe to see it except through its effects.” For the rest of the lecture, Kenyon spoke about how his art questions the familiar, makes the invisible visible and combines biology with technology.

In a piece titled “Spore”, Kenyon drew a parallel between a rubber tree plant purchased from the home improvement giant, Home Depot, and the store itself. He created electronics that would water the plant based on the movements of Home Depot’s stock market value. The plant would only be watered if the stock went up. To Kenyon’s surprise, the project serendipitously coincided with the real estate bubble of the early 2000’s and the plants kept dying. “It became a kind of interesting message about the housing market rise and eventual collapse,” Kenyon said.

“Tardigotchi”, created in 2012, is a sculpture that is part of the “Heatsink” exhibit. It combines the concept of a 1990’s toy called a Tamagotchi and a living tardigrade. Owners of a Tamagotchi were tasked with the care of a digital lifeform. The tardigrade, also known as a water bear, is a microscopic animal that can survive extreme conditions, such as heat, cold, and radiation, by going dormant for many years. One side of “Tardigotchi” houses the tardigrade and the other displays a digital representation of the tardigrade. The tardigrade can be fed and given light through a mechanical interface.

With “Tardigotchi”, Kenyon was exploring how physical people take care of their digital representations on Facebook, Instagram, and other social platforms. Citing the tardigrade’s capability of being revived after a hundred years, Kenyon asked, “What would happen to our profile or avatars if no one visited them, no one clicked on them. They’d just sort of sit there and they’d wait.”

While “Tardigotchi” is a more light-hearted, but no less important, look at biology and technology, other Kenyon creations take a more serious tone. “Puddle” and “Super Major” are commentaries on the oil industry’s seemingly hegemonic presence and how it impacts the environment. “Block” and one of Kenyon’s newest projects, “Tender”, focus on the fleeting nature and definitions of wealth. Other Kenyon pieces focus on consumerism. He also confronts issues of war in a project that each audience member received a piece of to take home.

In “The Notepad”, Kenyon memorializes every Iraqi civilian death on record that occurred within the first three years of the war in Iraq. The details of every death, including names and locations, are micro-printed on yellow legal pads. When viewed with the naked eye, the information appears as innocuous lines on the paper. Everyone at the lecture received a sheet of this paper.

As people peered at the lines on their sheets, Kenyon listed the various ways he distributes the notepads. Besides giving them to people and mailing them around the globe, Kenyon said, “I also smuggle it into the stationary supply of the U.S. and coalition governments so it goes under the noses of people in power who authorize, and unfortunately continue to authorize, the use of force.” The idea behind this is that portions of the used paper will make their way into the archives of history.

After the lecture, the hall emptied and the Emily Davis Gallery filled with artists and art enthusiasts alike who found conversation and inspiration within the “Heatsink” and “Altered States” exhibits. University of Akron photography student, Daniel (the last name not given), has been focusing his work on consumerism and said, “It was nice to see how professional artists are handling that in different aspects.” And, although he has concentrated more on photography, Daniel said: “seeing how [Kenyon] handles it like a performance and the video aspect is really interesting to me.” He is currently planning to add more forms of media to his work.

“Altered States” is also on display in the lower level of the Davis Gallery. Director of University Galleries, Arnold Tunstall, views the two artists featured, Christi Birchfield and Lauren Davies, as complementary to each other but also to the Kenyon’s “Heatsink” show. Tunstall said, “They speak to each other” when describing the methods they use. Davies works with digital prints and overlays them on other forms of media which she manipulates in various ways. Some of Birchfield’s pieces feature bleached canvas with patterns or impressions made by using plant material.

Painting and drawing student, Mckenna Carder, helped to install both “Heatsink” and “Altered States”. She described Davies’ and Birchfield’s work as “printmaking and sculpture but pushed to a different level.” Her favorite piece in “Altered States” was “Tear” by Birchfield. Carder said “I like how it’s not just in a rectangle. It’s kind of taking its own shape and taking its own form and kind of breaking the barriers of what you’d consider a traditional print.”

Carder also pointed out a piece by Davies which recreates bricks. This is done by using prints of photographed bricks on canvas which are wrapped around foam blocks. She said, “They were very squishy when we were installing them which is something that you wouldn’t expect and so it’s kind of an interesting juxtaposition of like what you normally expect to be really heavy but it’s not.”

“Heatsink” and “Altered States” are both on display until Oct. 20 at the Emily Davis Gallery in Folk Hall. The next show features University of Akron alumni artists Joe Bartram and Mike Gable and runs from Oct. 30 to Nov. 22. The Emily Davis Gallery calendar can be found at HERE. Another Synapse lecture is scheduled for Nov. 2 at the Akron Art Museum. Contemporary artist Rachel Sussman will be speaking. For more information on Synapse, click HERE.