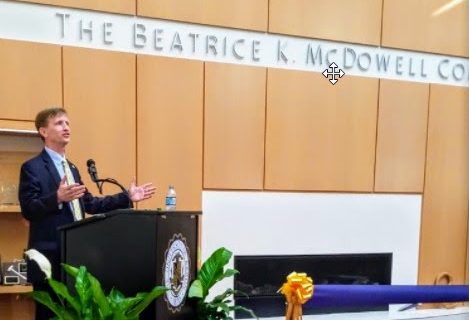 UA President Matthew J. Wilson speaks during the ribbon cutting ceromony at the C. Blake McDowell Law Center. The UA Board of Trustees voted to extend his contract and raise his salary this month.

The University of Akron’s Board of Trustees met on Wednesday, Oct. 11 and passed several resolutions, including the extension of President Matthew Wilson’s contract.

The meeting began with a moment of silence dedicated to former chair, Alex Arshinkoff. Arshinkoff served four terms as chair from 1997 to 2001. He passed away at the age of 62 on Aug. 28. President Wilson said, “Mr. Arshinkoff profoundly influenced the transformation of our campus as we know it today,” in an “In Memoriam” by University Communications and Marketing.

President Wilson reported several attendance statistics in his report to the Board. The number of entering new freshmen rose by 8% this fall. The 3,722 new freshmen have an average GPA of 3.48, the highest in University history. However, overall enrollment equaled 22,104, a 4.5% decline. Wilson said that the decline in enrollment was expected to be much higher because last year’s graduating class was larger than it has been in the past.

The University’s athletic director, Larry Williams, presented the resolution to approve the creation of a women’s lacrosse team and restore men’s baseball. The resolution was approved by the board. Beginning in the 2019 season, both teams will compete at the Division I level. The teams will be made up of 65 students recruited solely from Ohio. Williams stated that funding for scholarships will not come from the general fund but rather external sources. In his report, Wilson said that the cost of the programs would be offset by tuition paid by the recruited students.

The Board also listened to items of new business presented by Vice President of Finance and Administration and Chief Financial Officer, Nathan Mortimer. Mortimer recommended the lease of the former Center for Child Development, located at 108 Fir Hill in Akron, to the Ohio State Highway Patrol. Mortimer said that the presence of police activity near the main campus would be beneficial to enhancing the safety of the area. This recommendation was approved by the Board.

Mortimer also discussed the discontinued operations of The Nursing Center for Community Health. The Center, which opened in 1982, provided primary care to Akron residents without health insurance and educational opportunities to graduate and undergraduate nursing students. Mortimer cited low activity and a deficit of half a million dollars as the main impetus behind shutting down the Center. Because of this, five positions will be terminated. Those employees will receive priority when applying to other positions that they qualify for. The board approved this action.

Board member, Warren Woolford, a retired City of Akron planning director, gave a report from the Presidential Assessment Advisory Committee. The Committee is comprised of various groups, such as The University of Akron Faculty Senate, professors and student leadership, and individuals, including Akron mayor, Daniel Horrigan, and representatives from Knight Foundation and GAR Foundation. Committee members met on Oct. 2 to discuss President Wilson’s performance.

The Committee evaluated the priorities that had been a part of Wilson’s appointment. These priorities included increasing University enrollment and retention, and rebuilding and strengthening relationships within the University and the community. Committee members concluded that Wilson has met and exceeded their expectations and that he should remain president of the University.

Board chair, Roland Bauer, provided the details of the recommendation for an extension of Wilson’s contract. According to the employment agreement, Wilson will continue as the University’s 17th president and his contract will be extended to June 30, 2023. He will receive a raise in yearly salary from $370,000 to $450,000. This will include $20,000 per year in deferred compensation. Wilson will also be eligible for annual bonuses of up to $50,000 based on performance and a Board decision. The University of Akron Foundation will give an annual amount of $100,000 towards Wilson’s raise.

Bauer said that the raise in pay was “appropriate but well below other compensation packages of other public institutions.” He also stated that he looks forward to the University’s future with Wilson serving as president.

The next Board of Trustees meeting will take place on Wednesday, Dec. 6 at 7:30 am.