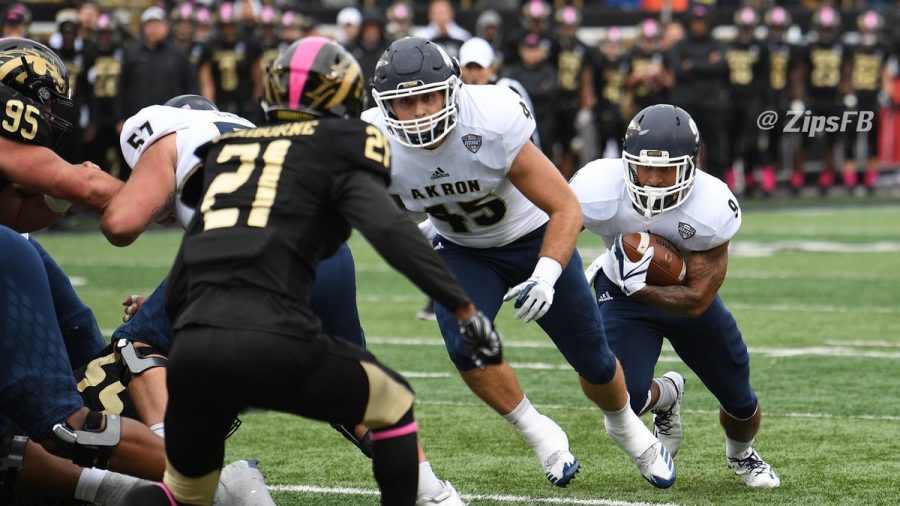 Akron’s Brandon Junk moves to block for Manny Morgan during their win over Western Michigan. (Photo courtesy of Akron Athletics)

The University of Akron football team had the chance to take a commanding lead in the Mid-American Conference East Division this weekend with their game against the Toledo Rockets but came up short, suffering a 48-21 loss in Toledo’s Glass Bowl. Marking Akron’s first MAC loss of the season.

“They just whipped us,” UA Head Coach Terry Bowden said. “Sometimes you just get whipped. Offense, defense, we got physically whipped and got beat.”

Akron found the end zone in the second quarter from a 25-yard pass from QB Thomas Woodson to receiver Kobie Booker for a touchdown. Quarterback Woodson went 18-33 for 205 yards with two touchdown passes and one interception.

“Now what we have to do is respond to it and look at all our goals and start back with the next week,” Bowden said.

Akron’s Mid-American Conference record falls to 3-1 on the season. The team is now tied at the top of the MAC East with the Ohio University Bobcats, following the Bobcats’ 48-3 victory over Kent State University.

The Zips return to InfoCision Stadium for its final Saturday game on Oct. 28. The Zips host Buffalo at 11:30 a.m. on the CBS Sports Network.