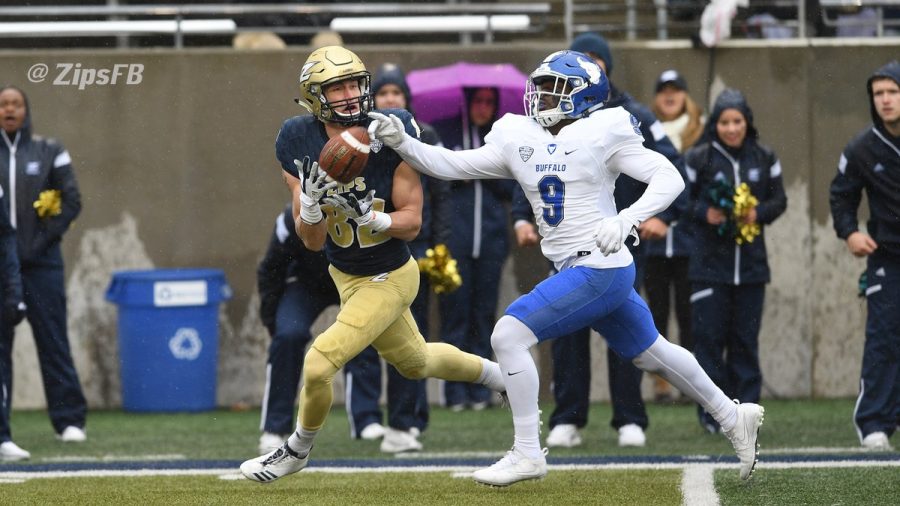 Akron receiver Austin Wolf catches a pass just out of the reach of a Buffalo defender during Saturday's win. (Photo courtesy of Zips Football)

The Zips bounced back from their defeat in Toledo last weekend with a big Mid-American Conference win over the University of Buffalo on a rainy Saturday Afternoon at InfoCision Stadium-Summa Field, 21-20.

Once again, Akron’s QB Thomas Woodson, led the Zips with 21 of 29 completed passes for 286 yards with three touchdowns and one interception. In addition to this, Woodson moves up to No. 2 on the all-time passing yardage list with 6,834 yards, behind UA’s Charlie Frye who threw for 11,049 yards.

Defensively, Jorden George had a career-high 11 tackles and an interception.

The fourth quarter for Zips fans was nerve wrecking as Buffalo looked as if they were going to sneak the game win after Bull’s 10-yard touchdown run with only 14:25 left on the clock.

At the end of the fourth quarter, the Zip’s defense, led by linebacker Ulysees Gilbert III, stopped Buffalo’s running game, securing the game for an Akron victory.

“You know what, we did a great job of stopping them,” Bowden said following the game. “I give my defense credit for playing good pass coverage, and forcing them run the ball out there in the end.”

The win against the Bulls puts Akron a half-game ahead of Ohio University in the MAC East Division with a 3-1 conference record.