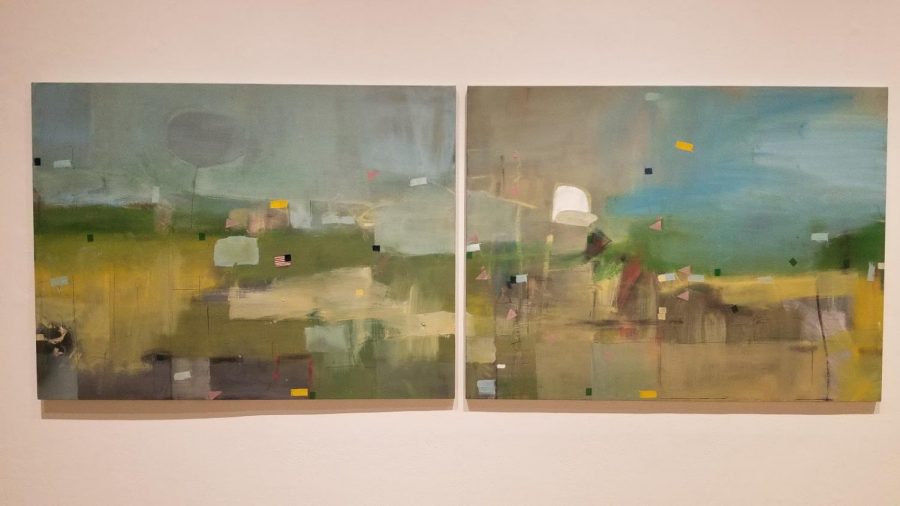 Two alumni from The University of Akron Myers School of Art are showing their work at the Emily Davis Gallery in Folk Hall from Oct. 26 to Nov. 22. Mike Gable’s exhibit, “special interest,” is displayed on the gallery’s upper level. The lower level houses Joe Bertram’s exhibit, “BASSACABEZA.” Both artists were present at the opening of the alumni exhibit on Thursday, Oct. 26.

Mike Gable graduated from The University of Akron in 2003 with a Bachelor’s of Fine Arts in drawing and painting. He has since remained in Akron where he keeps a studio and spends his time creating work featured in many group exhibitions at Summit Artspace. Gable’s solo exhibitions include “Souvenirs for Midget Tourists” at Akron’s Millworks Gallery in 2006. His art was recently featured in the show titled, “Gesture, Form, Line & Color: Exploring Contemporary Abstract Art,” in 2016, at the Box Gallery, located on the third floor of Summit Artspace.

The Box Gallery is operated by the nonprofit organization, Artists of Rubber City, which supports and promotes contemporary art and artists from Northeast Ohio.

Gable’s primary medium involves an assorted combination of oils and graphite on canvas. His work also ventures into mixed media collages on cardboard. On many of his creations currently featured in his exhibit, “special interest,” Gable employed a large swath of color that belies the many layers present in any given piece. In some of those works, closer inspection reveals the faint impression of undrawing in the form of figures, objects, or text. The piece “Rolling swivel chairs on stage,” contains elements that are more readily identifiable than some of the other pieces. However, the layers present are not just represented by physical manifestations. 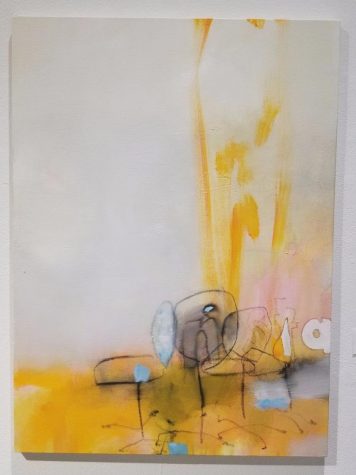 The audience becomes engaged in a conversation with Gable’s art that not only approaches what is seen by the eye but also what is not seen. In describing his process, Gable said that he spends time “building up and tearing down a work until it is ripe with association.” Yet, Gable is more interested in invoking his audience’s own associative thoughts. “Swim Club” is a diptych made of oil and graphite on canvas that is filled with layers, both physical and mental. Gable’s former Myers School of Art professor, Laura Vinnedge, was part of the audience Thursday evening.

Vinnedge teaches painting and drawing. As Gable’s former professor, she has witnessed Gable’s transformation from student to professional artist. She said, “he still retains the powerful spatial landscapes.” Vinnedge described Gable’s art as “a conflation between almost more traditional landscape imagery and that flat pop-culture reference.” She was also thrilled about seeing graduates from The University of Akron’s Myers School of Art become colleagues.

“It’s so exciting to see them continuing to be energized in their studio space and to continue to move forward,” Vinnedge said. This includes artist Joe Bartram.

In 2012, Bartram graduated from The University of Akron with a Bachelor’s of Fine Arts in sculpture. A year later, he relocated to Philadelphia, Pennsylvania. Bartram’s work has been featured in several group exhibits at Summit Artspace, Millworks Gallery, and other locations in Akron. In Philadelphia, at the Vox Populi Gallery, his work was included in the group exhibit titled “With For and Against.” His more recent solo exhibit, “Turnstile Underbelly,” was also featured at the Vox Populi Gallery in 2016.

Bartram’s exhibit, “BASSACABEZA,” is dominated by two large creations that expand the confines of the gallery’s physical space. The first piece, “Triple Crystal MK.2,” sits low on the floor and creates the feeling of flying over a village that is both advanced and primitive. The different focal points of the piece are made of bronze, ceramic, and steel. A set of three large, dyed and bleached, canvas squares are situated on the wall behind “Triple Crystal.” They serve as a backdrop that infuses the floor piece with a sense of spatial depth. 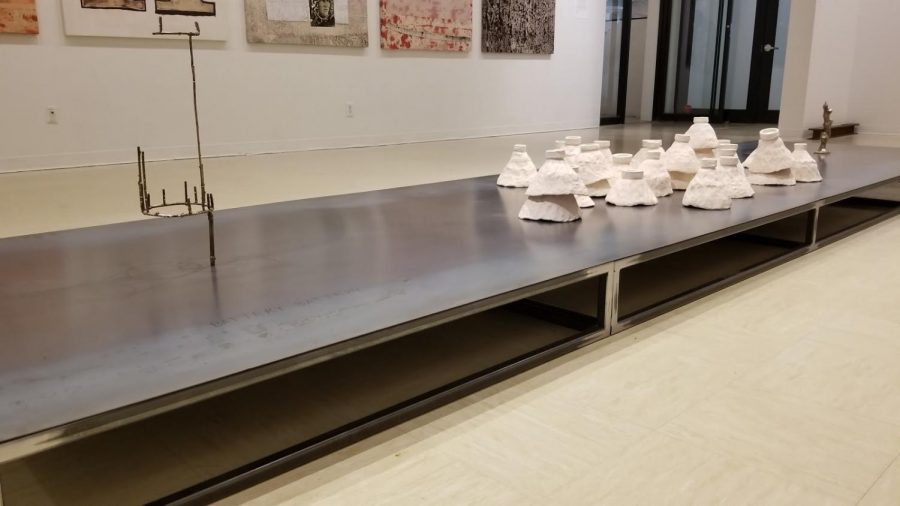 Jasmine Youngblood, a drawing and painting student, appreciated the way the lighting acted upon one of the structures in “Triple Crystal.” She said, “Everywhere you look, there’s its shadow on it.” Her favorite work, however, was “The Gulley.” Impressed by its size, Youngblood said, “It’s the biggest thing in the room. My eyes went straight to it.”

“The Gulley” is a large structure by Bartram consisting of cardboard, wood, steel, tar and asphalt. It resembles a sort of archway that pulls the viewer in as if one could walk through it to another land, reminiscent of the wardrobe in “The Chronicles of Narnia.” Jewelry and metalsmithing student, Arwan Clinkscale, enjoyed the luster of Bartram’s work. He said, “It’s black and it’s shiny so the light bounces off of it” and “it draws your eye to it.” 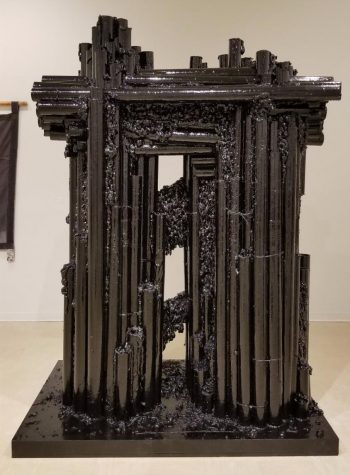 Youngblood and Clinkscale were part of a small group of Myers School of Art of students who had come to see the two alumni exhibits. They were inspired by the fact that the art on display was created by former students who had found some form of success. Youngblood said, “It makes me feel hopeful. I could get to that level someday.” Dane Lowenstein, graphic design student, and also part of the group, said, “If these people are able to do this in this studio, at this school, I think it’s a good message that it’s sending to all the kids here.”

That message is one of commitment.

Mike Gable said he does not get to spend the amount of time in the studio that he would like to spend, however, he is always thinking about the next creation.

Joe Bartram half-jokingly offered a piece of advice to young artists and said, “Go to the studio every day and go to the bar only one day a week.”

The Myers School of Art faculty members can spot that level of commitment in students. Professor Laura Vinnedge said, “We can tell who has become so committed to their own studio research that they’re no longer in their studios for a grade. They’re in their studios working all night long because they need to be.” While most of the students graduating from an art program will always appreciate art in some form, Vinnedge said she notices “the ones that are going to continue to stand out because they live here.”

Vinnedge stated that commitment also comes in the form of interacting with the surrounding environments, learning about other disciplines, and engaging with many forms of media. This exercise can foster innovation. She said those signs of understanding and involvement usually come early in a student’s career during the program but added that “[t]here’s always a surprise here and there. Everybody comes to that level at different rates, at different paces, and at different times.”

Artist Mike Gable can be found on Instagram under the username @gabledroid. His posts feature many of his creations including some photography work. Artist Joe Bartram’s Instagram username is @joe.bartram. His website is joebartram.com.

The Myers School of Art Alumni Exhibition will continue until Nov. 22 in the Emily Davis Gallery at The University of Akron’s Folk Hall. For more information about this exhibit and upcoming events visit the Gallery’s website at uakron.edu/art/galleries/edg.