After falling to the RedHawks, the Zips look onto their next game against Ohio as they compete for the MAC East title. 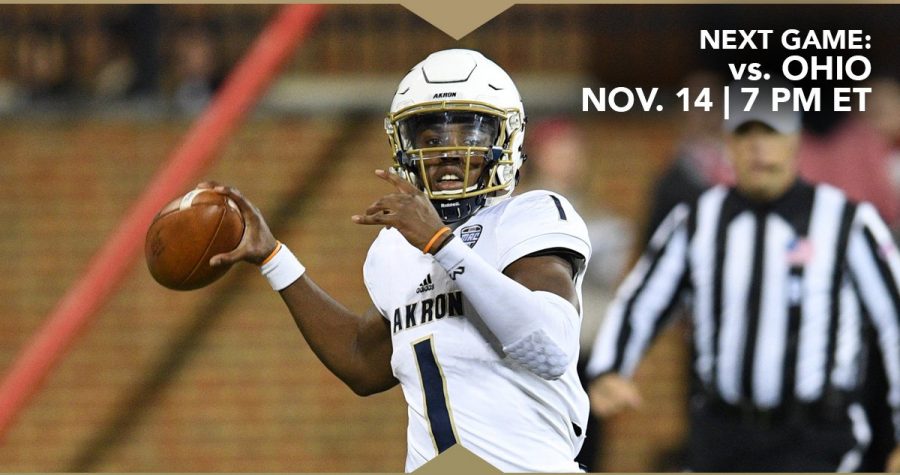 In their final Mid-American Conference road game of the season in Oxford Ohio, the Akron Zips suffered a setback against the Miami RedHawks Tuesday night, losing 24-14. Akron’s MAC record fell to 4-2 after the loss, giving the Ohio Bobcats a chance to secure a lead in the MAC East Division, depending on their result against the Toledo Rockets Wednesday night.

The Zips redshirt freshman Quarterback Kato Nelson made his first start of the season following the announcement that starter QB Thomas Woodson would not play due to a violation of team rules.

Nelson put up impressive stats for his first start at the position, throwing for 19-38 for 218 yards and a touchdown while also rushing for 12 yards.

Throughout the game, QB Rus Ragland, who returned from injury forcing him to miss the previous games, and RB Young proved to be the driving force for the RedHawks offense. Ragland went 19-32 for 244 yards and three touchdowns while giving up two interceptions. Young had 198 all-purpose yards, 100 rushing and 98 receiving with nine receptions.

The Zips kicker Nick Gasser missed a 31-yard field goal attempt field goal in the first quarter. Miami took possession but was turned the ball over on an interception by the Zips Shawn Featherstone, who returned the ball to  Miami’s 35, setting Akron up for their first touchdown of the game.

Akron’s lead was short-lived after Ragland connected a 19-yard touchdown pass to Sam Martin to tie the game 7-7. In the second quarter, an Akron interception from Jordan George gave the Zips another possession which ended on the 42-yard line without a score. –

On Miami’s final drive in the first half, the RedHawks drove to the red zone but ended the half with a 28-yard field goal giving Miami a 10-7 lead at halftime.

In the third quarter, Ragland led the RedHawks on a 72-yard drive, that ended with a 30-yard touch pass to increase Miami’s lead to 17-7. On the next drive, Miami added another touchdown, stretching their lead to 24-7.

Akron scored their second touchdown at the start of the fourth quarter after Nelson was able to complete a 30-yard pass to Tra’von Chapman.

Akron will close out their regular season with two home games. On Nov. 14, the Zips will play Ohio in a crucial game for determining who will win the East Division of the MAC. The following week, the Zips will take on Kent State in the annual battle for the Wagon Wheel in a rivalry matchup.