Men’s Soccer to Compete in MAC Tournament this Weekend 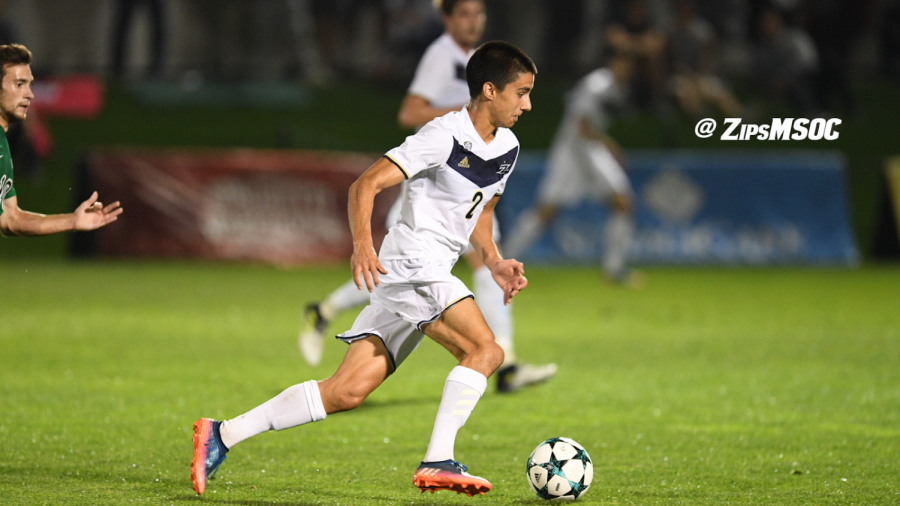 Akron player Joao Moutinho handles the ball in a match earlier in the 2017 season. (Photo courtesy of Jeff Harwell)

The Zips men’s soccer team enters this weekend’s Mid-American Conference Tournament as the second-seed and will face off against third-seeded SIU Edwardsville on Friday to begin play. The game is scheduled to kick off at 11 a.m. at the WMU Soccer Complex in Kalamazoo, Michigan.

The other semifinal game, following the Zips’ match on Friday, features fourth-seeded West Virginia taking on the host school and one-seed Western Michigan. The winner of each game will advance to the final and will square off for the MAC Championship on Sunday at 1 p.m.

Akron enters the tournament riding an eight-game winning streak, with their last loss coming against Western Michigan on Oct. 7. The Zips defeated SIU Edwardsville 3-1 in their previous meeting this season on Oct. 13 and shut out West Virginia 4-0 when they faced off on Oct. 27 in Morgantown.

Last season, Akron was eliminated from the NCAA Tournament in the second round by Indiana after winning the MAC. In 2015, the Zips made it to the College Cup semifinals but fell one game short of the championship with a loss in penalty kicks to Stanford. Akron won the NCAA Division I Men’s Soccer Championship in 2010 and aim to compete for the title once again in 2017.