The Zips face off against Bucknell on Sunday, Nov. 12, beginning their 2017 season of play. 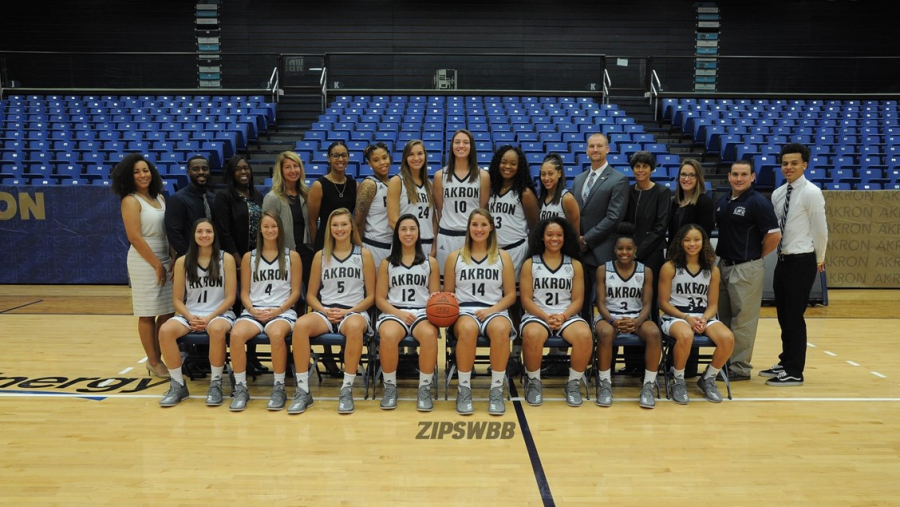 Under the guidance of 12-year head coach Jodi Kest, the Zips women’s basketball team will begin their 2017-18 season of play Sunday, Nov. 12 against Bucknell.

Kest, the longest-tenured head coach in the MAC and the winningest coach in program history, is happy with what she has seen from her young team thus far, and hopes to see them grow and improve throughout the season.

“We have so many young kids with a lot of freshmen and sophomores, and you have to re-teach everything to everybody,” Kest said following the team’s first practice of the season. “I thought the energy was good, the communication was good, and I am just very, very pleased.”

Returning starters, point guard, Shaunay Edmonds, and forwards, Haliegh Reinoehl and Caitlin Vari lead a sophomore class that combined to play over 2,000 minutes as freshmen a season ago. Edmonds and Vari appeared in every game for Akron last season, with Edmonds leading the team in assists and Vari ending up second on the team with a .458 shooting percentage. Guards, Shayna Harmon and Alyssa Clay, round out the Zips’ stout group of sophomores.

This season, Akron welcomes a trio of freshman that could see significant playing time alongside the veterans in 2017. Guards Destiny Perkins and Kynnedy Azubike, as well as forward/center, Sarah Lyendecker, are the Zips newcomers this season. Azubike and Lyendecker each made their collegiate debuts in Akron’s exhibition against Notre Dame College on Sunday, Nov. 5. Azubike recorded three rebounds, an assist, and a steal, while Lyendecker grabbed six boards, scored two points, and blocked a shot in her debut.

Despite the presence of so much young talent, the Zips do not lack veteran leadership. Akron has only two seniors this season, forward, Greta Burry and guard, Lauren Hung. Combined with redshirt junior guards, Megan Sefcik and Kaitlyn Flowers, and junior forward, Fredniqua Walker, the Zips have a staple of veteran leaders to help Kest mold the young players.

Burry, Sefcik, and Reinoehl were named captains by Kest ahead of the 2017-18 season. Burry and Sefcik appeared in every game last season for the Zips, with Reinoehl playing in all but one contest. Burry averaged 5.4 points and 5.2 rebounds per game, and shot a team-best 50.4 percent from the floor in her 23 starts last season. Sefcik ranked second on the squad in three-pointers made (59), attempted (182), and percentage (32.4), and finished third in total points scored (238). Reinoehl started the final 16 games for the Zips last season, averaging 4.9 points and 6.6 rebounds per game in MAC play.

Last season, the Zips wound up with a 9-21 record, going 2-16 in conference play. In the annual MAC preseason poll on Oct. 25, the conference’s 12 head coaches predicted the Zips to finish sixth in the MAC East Division once again this season. Buffalo was tabbed to take the East, while Central Michigan is expected to repeat as MAC champion.

Akron will look to improve upon last season and outplay the preseason prediction, starting with their season opener Sunday, Nov. 12 at 2 p.m. on the road against Bucknell. The Zips will make their 2017-18 home debut as part of the Akron Classic on Friday, Nov. 17 against Southeastern Louisiana University at James A. Rhodes Arena. Students are admitted free to all home women’s basketball games with their Zip Card.