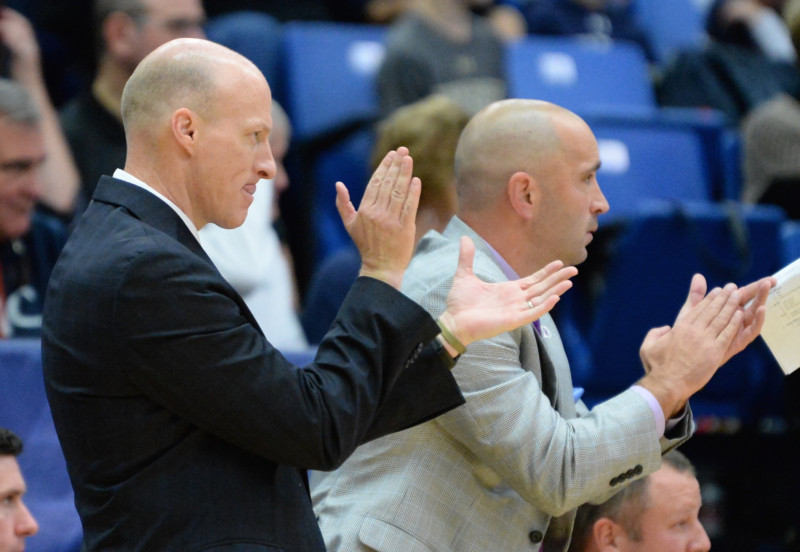 Head Coach John Groce Leads Akron to their first win of the season against the Cleveland State Vikings. (Photo Courtesy of The University of Akron Department of Athletics)

The University of Akron had the honor of hosting this year’s third annual Northeast Ohio Coaches vs. Cancer Doubleheader on Saturday. Four teams competed in the tournament at the James A. Rhodes Arena; Akron and Cleveland State at 7 p.m. and Kent State and Youngstown State following at 9:30 p.m.
Akron Rallies in Gritty Second Half
The John Groce era of Zips basketball officially began during their season opener against the Cleveland State Vikings.

Groce and the young Zips team showed true grit during their debut, defeating the Vikings 67-57. The victory made Groce the first Akron coach to win his first career game since Bob Huggins during the 1984-1985 season.

The first half proved to be a scrappy contest for both teams, filled with fouls, double dribbles and poor shot attempts. With 7:46 on the clock, Akron was down 24-12. Five Cleveland State players each scored five points. Akron had seven turnovers in the first half but Daniel Utomi kept the Zips alive in the first half with his fourteen points.

“We’ve got a lot of inexperienced young guys, but we can’t use that as an excuse,” Groce said. “I’m not an excuse guy. I’m not into that.”

Freshman Guard Eric Parrish had a dunk early in the second half, which re-energized his teammates and the atmosphere of the arena. Akron took off from there, outscoring the Vikings 15-7, tying the game at 37 with 15:30 after trailing 30-22 in the first half. Malcolm Duvivier finished with a baseline dunk that sent the building off. Cleveland State had to call a timeout as the Zips took a 45-39 lead.

“I felt that the dunk obviously changed the environment in the building,” Groce said on his team’s second-half performance. “Rebounding offensively and defensively by the entire team. Utomi was great on the glass. So it was more of an energy, toughness, grit thing for us in the second half that got it done. So hopefully we can take a look at the film and try to improve on our execution to work along with that grit and toughness.”

Akron was able to come out with the game win, despite only shooting 31 percent from the floor. However, the Vikings contributed to the Zips win with their 10-of-26 attempt from the foul line.

Another factor was the rebounding. Akron trailed in rebounds in the first half, 23-16, but finished strong with a 46-38 edge over Cleveland State.

“In the second half they wrestled us to get the control away from us,” first-year Cleveland State head coach, Dennis Felton, said. “Rebounding started our troubles.”

Lone returning starter, Jimond Ivey, had a rough first half but finished the game with 10 points, four rebounds and four turnovers. Ivey gave credit to Utomi’s 20 total points and freshman Parrish, who finished with 17 points, six rebounds and one steal.

“He played lights out,”  Ivey said about Parrish. “I told him that. Everybody contributed, and the freshmen that came in, they played better than I played in my first game and I told them all. That’s a good sign looking forward.”

With new leadership at the helm and a new group of players, Akron will need to continue to grow and gain experience come the middle of the season when they begin their Mid-American Conference games in January.

“It’s a bigger role for me this year since Jimmy Hall and Deon Edwin left,” said Walker, who scored 14 of his 20 points in the first half, and tied De La Rosa for the team lead. “I have to step up and so do the other guys.”

“The last guy that was in my shoes was a three-time All-MAC player,” De La Rosa said. “So I already know I have big shoes to fill. I know that I have to perform at a high level so that we can be successful.”

De La Rosa went for 9-10 from the field and recorded eight rebounds for the Flashes and blocked one shot.