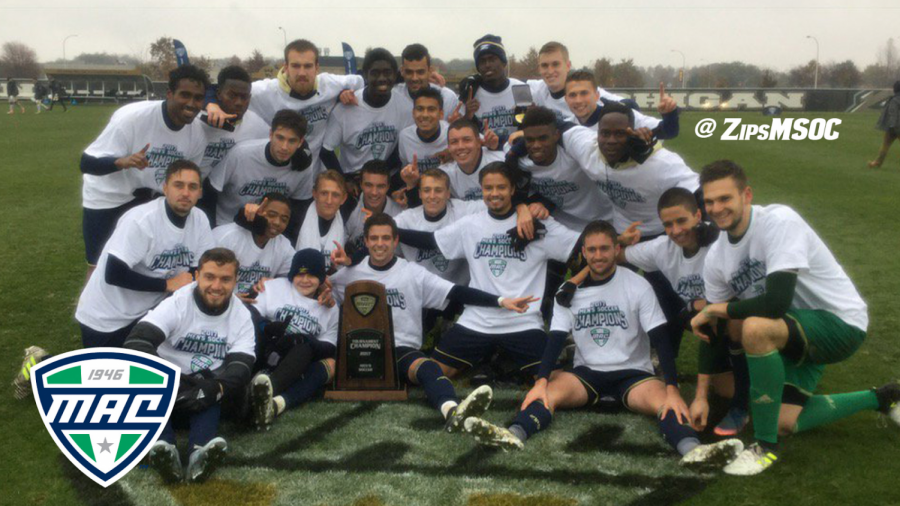 Akron Men’s Soccer entered the MAC Tournament as the second-seed after ending the regular season on an eight-game winning streak. The Zips seem to be peaking at the right time, as they continued to ride the winning wave all the way to the 2017 MAC Tournament title.

The Zips opened tournament play on Friday against SIU Edwardsville. The Cougars did not make it easy for the Zips to advance to the title game, holding a 1-0 lead over Akron with just 17 seconds left in regulation. It was then (89:43) that redshirt sophomore Skye Harter netted the equalizer to force the match into overtime; this was Harter’s fourth goal of the season.

It took two overtimes for the Zips to score the game-winning goal, as Senior Stuart Holthusen sent Akron to a 2-1 victory in the 106th minute (105:06) with a goal assisted by Redshirt Junior Ezana Kahsay. The come-from-behind win, capped off by Holthusen’s ninth goal of the season, sent the Zips to the MAC Championship game against the number one-seed and host of the tournament, Western Michigan, on Sunday. The Broncos were the only MAC team ahead of Akron in the rankings and were the last opponent to take down the Zips in the regular season.

After heading to the locker room tied 1-1, a pair of second-half goals allowed the Zips to seize the match and capture their 14th MAC Tournament title with a 3-1 victory. Holthusen stayed hot on Sunday, netting the first goal of the match at the 36:30 mark. The goal was Holthusen’s team-leading tenth of the season and his eighth in the Zips’ last five games. Holthusen was named the tournament’s most valuable player.

After Western Michigan tied the match 1-1 before the half (44:49 – Ben Thornton), the Zips received contributions from a couple of other players, as senior Sam Gainford and redshirt senior Manuel Cordeiro found the back of the net for Akron. In the 56th minute, following a corner kick from Harter, Gainford recorded his seventh goal of the season to put the Zips back on top, 2-1.

“It’s not an easy place to come, and we knew that coming into the weekend,” Gainford said following the match. “They leveled it right before the end of the first half, but we were dominating the game. We were really playing our game, and we knew we just had to stick with and we’d get the win.”

After multiple defensive stops by the Zips on Western Michigan attacks, Cordeiro sealed the deal with just his second goal on the year at the 77:24 mark, with assists from sophomore Nick Hinds and Gainford. This gave the Zips a 3-1 lead and was Sunday’s final score.

By earning the MAC Tournament victory, the Zips secured themselves a spot in the NCAA Tournament, their 32nd berth in program history.

“Play Akron soccer,” head coach Jared Embick said to his team heading into the NCAA Tournament. “That’s what we did at the end. It was a deserved victory. Now… rest up, see what happens with the draw, and get ready to go attack a national championship.”

Akron is expected earn at least a top-eight national seed when the NCAA reveals its tournament pairings on Monday, Nov. 13, at 1 p.m. on NCAA.com. There will be a watch party for the selection show in the Tommy Evans Lounge at James A. Rhodes Arena with doors opening at 12:30 p.m. There will be free food for first 100 students, giveaways and prizes for fans in attendance.