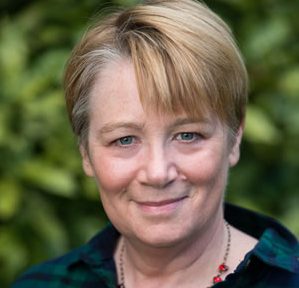 Dr. Jon Miller and Dr. Mary Biddinger will be representing The University of Akron Press at the 2017 National Book Awards Ceremony in New York City on Wednesday, Nov. 15. The poetry book, “The Book of Endings”, written by Leslie Harrison and published by U of A Press, is one of five books in the poetry category listed as finalists for a National Book Award. This is the first time a publication by the Press has been placed in the Award shortlist.

Harrison’s book is one of the recent works published under The Press’ Akron Series in Contemporary Poetics. “The Book of Endings” was a U of A Press Editor’s Choice selection in 2015 and published in late 2016, making it eligible for consideration of the 2017 National Book Award.

The National Book Award is a yearly award given by the National Book Foundation to authors in four categories: fiction, nonfiction, poetry, and young people’s literature. Five finalists are chosen for each category. At a private function on the eve of the Awards Ceremony, all 20 authors receive $1,000, a medal, and a citation from the Awards panel. Author, Leslie Harrison received her’s Tuesday evening, Nov. 14.

This year’s Ceremony marks the 67th year of the National Book Award, established in 1950 by the Foundation. Nationalbook.org states that the Foundation and the Award’s mission is to “celebrate the best of American literature, to expand its audience, and to enhance the cultural value of great writing in America.” If Harrison wins, she will be joining the ranks of past winners, such as William Faulkner, Norman Mailer, Lillian Hellman, and Alice Walker. However, even being shortlisted is an honor in itself.

In an email, Dr. Leslie Harrison, who is also an assistant professor in the English department at Towson University, recalled the day she found out she was a semi-finalist. She burst into tears after seeing a congratulatory email containing a website link a friend had sent her. “It seemed strangely magical to be sitting on my couch, in my pajamas, with my dogs, and to have my name appear on the New Yorker’s website and the National Book Foundation’s website,” Harrison said.

On the day the Foundation was to call authors who had been selected as finalists, Harrison, who normally has trouble finding her cell phone at any given moment, had her phone by her side. She said, “I was a wreck.” Fortunately, she received the call just before having to teach a morning class. Although Harrison wanted to “sing and dance and take a walk and cry and laugh,” she could tell no one. She was only allowed to tell her partner or a close friend until the following day when the shortlist was publicly announced.

Dr. Mary Biddinger, who has been the poetry series editor for the Press since 2008, had a similar experience when she found out. She did not know about Harrison being chosen as a finalist until a colleague from the University of Pittsburgh Press sent her a Facebook message saying, “Congrats.” That was followed by an email to Biddinger from Harrison communicating the good news. Biddinger said, “I just sat there and cried.” She then proceeded to send text messages to Press director, Dr. Jon Miller and editorial and design coordinator, Amy Freels. “I’ll remember that forever. It’s a big deal and not something that was expected,” she said.

Being shortlisted for a National Book Award is an honor that extends to both the author and the publisher.

Miller, Press Director since 2015, said, “It’s so great to get this level of recognition.” More specifically,  he said it’s a wonderful recognition of the care and high-quality work done by Mary and Amy Freels, the book designer. Biddinger said that “it’s also important to show that poetry comes from a lot of different unexpected places.” She said that being on the shortlist “represents, not only, our sensibility here but also the place where we’re publishing.”

This recognition puts Akron, Ohio and the University on the map of the literary world.

Biddinger said, “We’re able to showcase, not just the Press, but our whole University. We’ve got a great University here. We have an MFA program in creative writing. We’re part of a greater presence in Akron.” She also said that the recognition highlights “the fact that we’re well known in the poetry publishing world.”

Harrison is still processing the impact of being a National Book Award finalist.

She focused on the level of attention her book will now get. Harrison said, “Writers want readers—we want people to find our poems and for our poems to find their audience. This definitely gives the book a higher profile, which gives it a better chance of reaching readers who will love it. I suspect there will be more professional opportunities in the future, which is exciting, but right now, I’m grateful for every person who reads my book.”

As for becoming a winner, Harrison faces some stiff competition from fellow poets Danez Smith, Shane McCrae, Layli Long Soldier, and Frank Bidart. While she wants to win the main prize in her category and receive $10,000 and a bronze sculpture, she is a big fan of Bidart. Harrison said, “I have loved Frank Bidart’s poems since I first started reading poetry seriously. I love his work. That I am on the same list that he is on is astonishing, wondrous and lovely. Plus–if I’m being totally honest, I want my book to win, of course, but I also want Frank’s book to win.”

Wednesday evening will reveal the winners of the 2017 National Book Award. Literary enthusiasts can follow the ceremony live on Facebook beginning at 7:20 p.m. The link to the live feed can be found at the top of the website nationalbook.org.

More information on author, Leslie Harrison is available at leslie-harrison.com

Congratulations and good luck to The University of Akron Press and Leslie Harrison.