Tuesday night, the Zips beat OU to secure bowl eligibility and to take control of the MAC East Division. 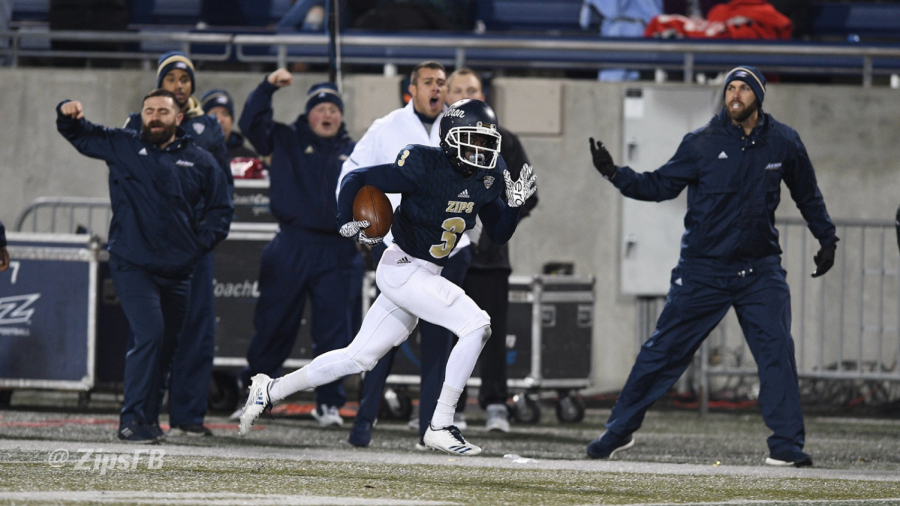 Kwadarrius Smith on the way to the endzone for a 71-yard receiving touchdown. (Photo courtesy of Zips Football)

Tuesday, Nov. 14, The University of Akron Zips defeated the Ohio University Bobcats 37-34. The Zips became bowl-eligible for the second time in three years and now control their path to the Mid-American Conference championship game.

Tuesday’s game had all the elements of a great #MACtion game. The game was a high scoring and action-packed nationally televised game.

The Zips found themselves in an early deficit when Bobcats QB Nathan Rourke cut through the Zips defense for a 68-yard touchdown run just two plays into the game. On the ensuing drive, redshirt-freshman QB Kato Nelson led the Zips 75 yards downfield, but the Zips were forced to settle for a field goal. Nelson contributed 22 yards rushing and threw for 31 yards.

Junior DB Shawn Featherstone came up big for the Zips when he intercepted a pass and returned it 45 yards, giving the Zips excellent field position for their next drive. The Zips would capitalize on their defensive play as Nelson connected with WR A.J. Coney on a 16-yard touchdown pass. The Zips lead, 10-7.

The Bobcats took the lead away from the Zips at the end of the first quarter after a 57-yard drive. The Bobcats expanded their lead after a blocked punt which gave them the ball on the Akron five-yard line. The Bobcats took control of the game with a 21-10 lead in the second quarter.

The Zips answered by scoring 14 unanswered points on back-to-back offensive plays. Nelson completed a 71-yard touchdown pass to WR Kwadarrius Smith, cutting the deficit to four points. On the following kickoff return for the Bobcats, the Zips forced a fumble and recovered it on the 23-yard line.

Akron capitalized on the turnover with a pass to the back corner of the end zone from Nelson to Austin Wolf on the first play after the fumble. After scoring 14 points within 16 seconds of play, the Zips took a 24-21 point. OU went on to tie the game with a field goal with 6:14 to go in the half.

The tie didn’t last long, Akron only needed three plays to score again. Nelson had yet another big completion to Smith for a 54-yard touchdown. Although, the Bobcats blocked the following extra point attempt, Zips took the lead at the half, 30-24.

Defense dominated the second half, as neither team could seem to sustain multiple drives. The Bobcats scored the only points of the third quarter on a 46-yard field goal.

Another interception, this time by Jordan George, set the Zips up for their lone score of the second half. The Zips defense was able to contain the Bobcats for the remainder of the fourth quarter.

The 37-34 victory secured bowl-eligibility for the Zips. They are in control of their path to the conference championship game after beating the Bobcats. If the Zips beat Kent State next week or if the Ohio Bobcats lose their final game, then the Zips will represent the East Division in Detroit for the MAC Football Championship.