See, Hear, Taste and Do at Akron's New Year's Celebration 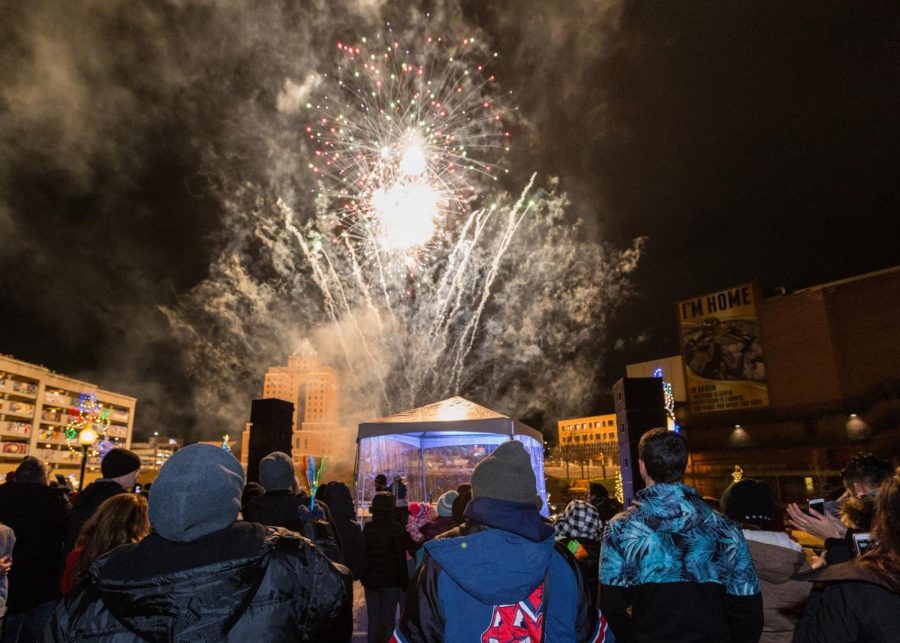 On Dec. 31, from 6 p.m. to midnight, Akron will usher in the new year with First Night Akron 2018. This will be the 22nd year for Akron’s New Year’s Eve celebration which spans several blocks of the downtown area. The festivities include live music and dance performances, interactive activities for adults and children, and other events. Admission buttons are $10 and children under 10 years are free when accompanied by a button-wearing adult.

Last New Year’s Eve, approximately 13,000 people attended First Night Akron. But, First Night is far from the wild and chaotic scene of Times Square in New York City on New Year’s Eve. It is a multi-venue and family-friendly event that not only celebrates the coming year but also highlights talents and organizations from around the area. The night is organized by the Downtown Akron Partnership.

Downtown Akron Partnership, located on the 4th floor of Greystone Hall, supports existing and creates new community programming and events in downtown Akron. These events, in conjunction with other measures that improve the safety and convenience of the area, make Akron more attractive to people, families, and businesses. DAP also provides Ambassador Services. If you get locked out of your vehicle in the downtown area, you can call a phone number listed on their website. Within minutes, a representative from DAP will come and unlock your door for free.

On New Year’s Eve, you will not need your car to make your way to all the venues participating in First Night.

METRO bus service to downtown will be free for button holders on Dec 31 after 4 p.m. At First Night, from 6 p.m. to 11:30 p.m., METRO buses and city trolleys will operate along a loop that covers all the different venues. That will be free as well. Although the buses will be warm, bring a coat and a pair of mittens. Some of the events take place outside.

Matrix Performing Arts, a marching percussion ensemble, will be performing on Main Street at 8:45 p.m. and 11:30 p.m. Visitors will have a chance to take a ride on a horse-drawn sleigh from 6 p.m. to 9 p.m. Music groups The Gage Brothers, Umojah Nation, and Jul Big Green will be performing throughout the night at the main stage on Mill Street.

Outside of the Akron Art Museum, the Bud and Susie Rogers Garden will feature ice sculptures with live ice carving demonstrations at 7:15 p.m. and 8:15 p.m. First Night’s Snow Queen and Ice Princess will be by the sculptures saying hello to children.

Inside the Akron Art Museum, several galleries will be on display. Summit Metro Parks will be featuring an interactive community art project in the museum’s lobby from 6 p.m to 9 p.m. The Akron Civic Theater will play host to NEOS Dance Theater, the music of Michael Weber, and Akron soul band, Wesley Bright & the Honeytones.

Many things are happening at the John S. Knight Center. Former Stomp percussionist and current Cleveland Cavaliers Q Stix percussionist, Elec Simon, will be performing at 8 p.m. The University of Akron Steel Drum Band will be holding a workshop at 6:15 p.m. and performing at 7:15 p.m. and 8:15 p.m. In the OMNOVA Room of the Knight Center, visitors can dance with headphones in the silent disco from 6 p.m. to 10:45 p.m.

The Akron-Summit County Public Library will house a D.J., children’s activities, and a sensory space by the Center for Applied Drama and Autism. Several music acts will be performing, including Nuance. Nuance is The University of Akron’s all-male a capella group. They will be performing in the library at 6:15 p.m. The group is also listed as “roaming entertainment” in the event guide for First Night.

Other venues taking part in First Night Akron 2018 include Greystone Hall and Zion Lutheran Church with their own lists of assorted musical acts and children’s activities.

Be sure to stop by the High Street parking lot of the Knight Center for some food. Local food trucks and restaurants The Square Scullery, Stray Dog Cart, and Swenson’s will be serving up their fan favorites. Some eateries located within and around the First Night zone will also be open for service.

Any events still going on near the end of the night will stop at 11:30 p.m. At this point, everyone should make their way to Main Street for the Huntington Bank fireworks show. The show will mark the beginning of the new year at midnight. For children who need to be in bed earlier (and adults who would rather not stay out as late) there will be a fireworks show at 9 p.m., also on Main Street.

The wide variety of events and multiple venues on First Night is a great display of some of the many things Akron has to offer. The night brings the Akron community and people from surrounding areas together in celebration of the promise of a new year. However, one look at the color-coded event guide found on First Night’s website and it becomes clear that one person cannot experience every single act and activity.

Besides the event guide, the website also provides links to an artist list with descriptions, a food guide, and a map of the area in downtown Akron that First Night encompasses. Download the files, grab a marker, and put together a game plan. Even the most imprudent free spirit will appreciate being able to make the most of what should be a fun evening.

In any case, do not forget to purchase admission buttons. They guarantee entry into First Night but the buttons are more than just a ticket. Each year, the local public is invited to submit designs for the new button. On Oct. 26, the First Night Akron Facebook page announced that this year’s button artist will be Akronite, Alison Brouse.

For an extra $5, a Discover Downtown Akron Passport can be purchased. This will include admission to First Night Akron. The passport program provides admission to almost 20 events in downtown Akron throughout the year. People are encouraged to continually explore and discover downtown through this program. Details about the passport can be found at www.downtownakron.com/passport.

Admission buttons will be available online at firstnightakron.org until Dec. 18. They can also be purchased at the following locations:

For last minute purchases, Acme Fresh Market, the Akron Civic Theater, the Akron Art Museum, and The Library Shop at Main will sell admission buttons until 8 p.m. on Dec. 31.

Those wishing to take on a more active role with First Night Akron may want to consider helping out. To volunteer, contact DAP at (330) 374-7676 or send an email to [email protected]

Remember: have a plan, dress warmly, and Happy New Year!