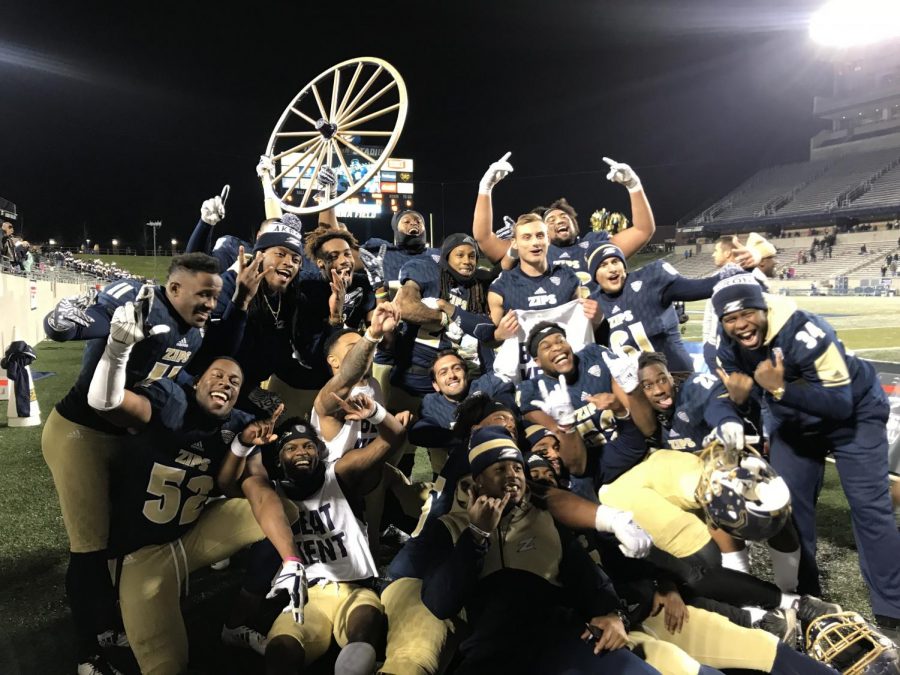 Members of the Akron Zips football team celebrate with the Wagon Wheel following their 24-14 win over Kent State at InfoCision Stadium on Tuesday.

The University of Akron football team walked out of InfoCision Stadium on Tuesday night as the Mid-American Conference East Champions following their 24-14 triumph over school rivals Kent State.

Freshman quarterback, Kato Nelson, lead the Zips through the air, completing 6-of-20 passes for 69 yards with a touchdown and an interception.

On the defensive side of the ball, Ulysees Gilbert III had an impressive game, leading the team’s defense with 14 tackles and one sack for three yards.

The Zips jumped out to an early lead over the Flashes, 10-0 in the first quarter. Kent State’s Justin Rankin rushed for the Flashes first touchdown of the game in with eleven minutes left in the first half.

With only 1:39 on in the game the Zips led the way, 14-7, Akron’s Alvin Davis intercepted a pass from Flashes’ quarterback George Bollas and return it to Kent State’s 40-yard line. Akron capitalized on Davis’s play and nabbed a one-yard touchdown run with 18 seconds left in the half, thanks to running back Morgan.

“If it’s going to be a defensive struggle, I want our defense to win the day,” head coach Terry Bowden said, “especially right before the half. It was incredible. It was valuable to us.”

In the second half, Akron only gave up one touchdown to Kent State’s tight end Chalfonte Butler on a one-yard pass from running back Justin Rankin to make the score 24-14, the eventual final score.

Akron finished the regular season 7-5 and 6-2 in the MAC, capturing the 2017 Mid-American Conference East Division title, their first since 2005.

The Zips will play the MAC West Division Champions, the Toledo Rockets, at Ford Field in Detroit on Saturday, Dec. 2, at noon.