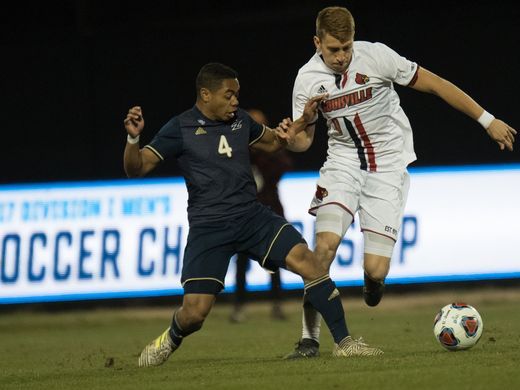 The Elite Eight match between the University of Akron and the Louisville Cardinals featured a rematch of the 2010 NCAA National Championship game. The Zips won this time as well, but on penalty kicks, advancing them to the Final Four of this year’s College Cup.

The match marked the sixth time that Akron went into extra time this season. Akron bested the Cardinals from the penalty spot, 4-3 to return to their second College Cup in three seasons.

“I think the experience of all these overtime games recently and the belief with coming through brings results,” head coach Jared Embick said. “It has a lot to do with it. If we continued to work hard and stick with it and play Akron soccer, we’d have a chance to win.”

Keeper Ben Lundt neither made every save on the night, guessing the correct way the ball was kicked or had a touch of the ball, but bought the game into sudden-death penalties with his save against Louisville’s Sawyer Edwards’ shot.

“That was his moment,” Embick said of Lundt. “He felt a lot of confidence to bail us out in that shootout. He was phenomenal.”


Akron’s Niko De Vera calmly stepped to the line and struck the ball into the top left corner against keeper Will Meyer to secure the Zips Final Four spot.

The Zips will travel to Philadelphia, Penn. for their semi-final game ninth-seeded Stanford on Dec. 8.