Akron utilized a career night from Olojakpoke to defeat the Mastodons for their fourth consecutive home win to begin the season. 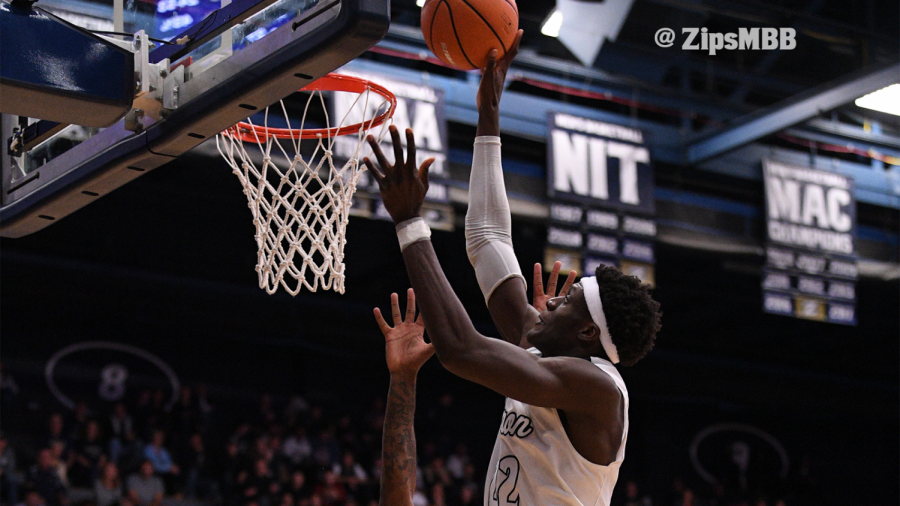 No. 22 Emmanuel Olojakpoke drives for the basket. (Photo courtesy of Akron Athletics)

After trailing early and fending off multiple challenges from Fort Wayne, Emmanuel Olojakpoke and the Akron Zips held on for an 83-79 victory on Wednesday at James A. Rhodes Arena. The sophomore forward posted a career-high 24 points, as well as seven rebounds and four blocks to help lead the Zips.

The Zips trailed early in the game, falling behind by as many as six points in the first half. The Mastodons hit an impressive 6-of-12 three-pointer in the first 12 minutes of the contest but also turned the ball over six times during that span leading to 10 of Akron’s first 20 points, keeping the Zips in the game. Olajokpoke closed the opening frame with 14 points and three rejections as the Zips went to the half with a 46-36 advantage.

Turnovers and poor free throw shooting from the Zips allowed Fort Wayne to crawl their way back into the game in the second half. The Mastodons closed the margin to four points multiple times, and pulled within two points with 28.4 seconds remaining in the game before the Zips shut the door and sealed the win. Akron coughed up the ball 11 times in the second half alone, and shot just 5-for-17 down the stretch from the charity stripe.

Akron relied on their perimeter shooting and rebounding advantage to hold on and squeak out the narrow victory. The Zips shot 41.7% (10-for-24) from beyond the arc and 50.8% (31-for-61) from the field. Akron out-rebounded Fort Wayne 40-28, leading to 12 second-chance points.

The win moves the Zips to a 4-2 ledger, with all of the team’s wins coming in their four games at home thus far on the season. The Akron men’s basketball squad will be back in action at James A. Rhodes Arena this Saturday, Dec. 19, as they host Appalachian State at 2 p.m. The game can be seen on ESPN3 and will be broadcast on 1350 AM. All University of Akron students are admitted free to home games with their Zip Card.