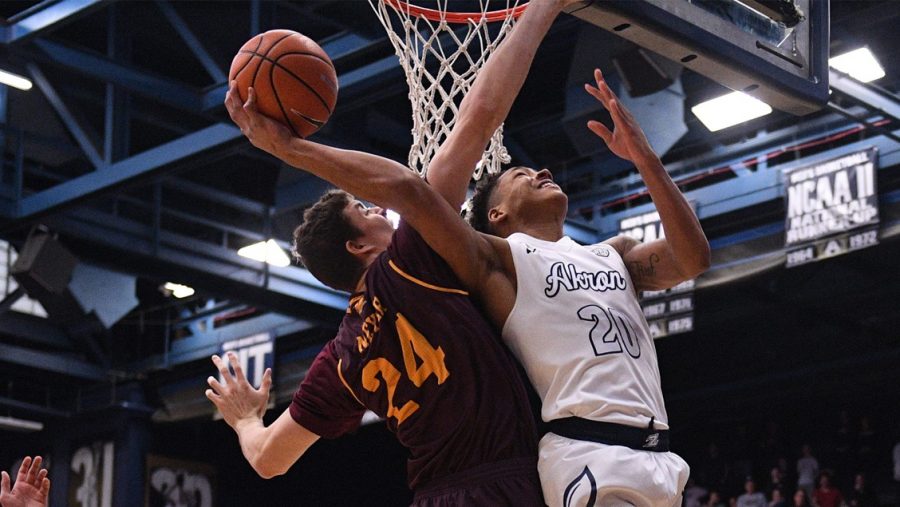 The Akron Zips ended their losing streak upon defeating Central Michigan Saturday afternoon,69-63. Akron is now 11-13 on the season, and  4-8 in the MAC East conference.

The Zips provided Coach Groce with the full team effort he has been searching for. Daniel Utomi and Jimond Ivey did what they usually do, score the ball. The duo combined for 39 points against Central Michigan.

A new leader for the Zips, as freshman guard, Eric Parish, scored a game-high with 21 points. In addition to, 9 rebounds, and multiple concerted efforts to get to the free-throw line.

The game was a back and forth affair as Akron’s largest lead was only 9 points, while Central Michigan only lead by 6 at one point throughout the game. The teams were evenly matched as turnovers, points in the paint, and rebounding totals were all identical.

Central Michigan had four players score in the double figures.Kevin McKay and Shawn Roundtree Jr. were the lead scorers for MI, as both men respectfully scored 14 points each.

On the game, the Zips shot 44% from the field. The stat that stands out the most though would have to be the assists. The Zips had 14 assists on 25 made shots.

With this loss, Central Michigan will now drop to 15-10 on the season, and 4-8 in conference play. The team looks to rebound on Tuesday, as they travel to DeKalb, Illinois to take on Northern Illinois.

The Zips will look to continue to build upon this positive game, as the team is only six games away from the MAC tournament. The team will take on their next opponent, Ball State on Tuesday, Feb. 13 at James A. Rhodes Arena. The Zips and Cardinals are set to tip off at 7 p.m., the game can also be streamed on ESPN3. For more information and tickets on the upcoming game, visit gozips.com.