Mesa Hispana is an informal gathering where students, faculty, members of the community and others can learn and practice Spanish. 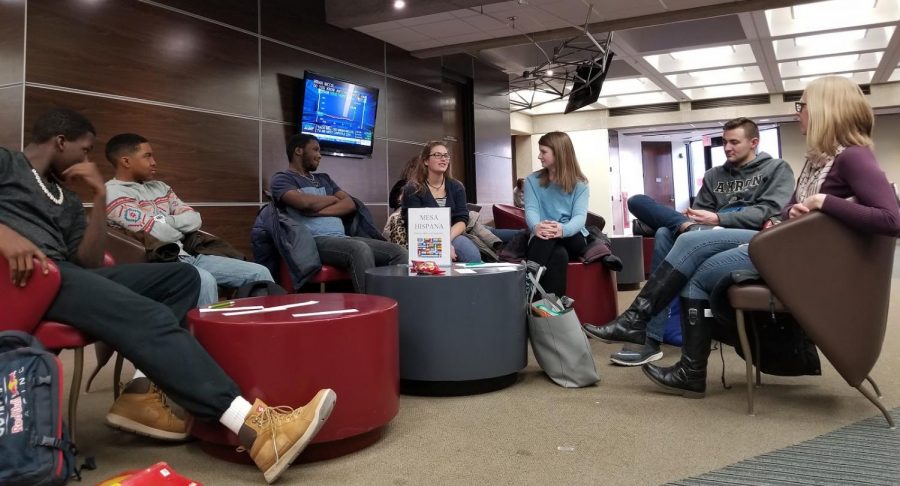 Want more opportunities to practice using the Spanish language with fellow students, community members and others? Sponsored by the Department of Modern Languages, Mesa Hispana allows people to practice Spanish and more through an informal gathering.

Freshman Gregory Holmes, a mechanical engineering major, said Mesa Hispana is not as bad as some people may think and could even get better if more people attended to embrace learning Spanish.

“Just today, we had a lot of fun and we laughed. Even when we may not really understand what is being said, [Mesa Hispana] is still helpful and enjoyable,” Holmes said.

This my second semester attending Mesa Hispana and I feel my Spanish-speaking skills, knowledge of vocabulary and overall interest in learning have greatly increased.

Spanish Instructor Cortney Benjamin, the host of Mesa Hispana, said speaking with students in an informal setting is great because students are more open to casual conversation about the topics they want to discuss.

Through the informal setting of Mesa Hispana, students don’t have to worry about “receiving participation grades or someone correcting their grammar,” Benjamin said.

Several students who have attended Mesa Hispana believe the informal structure makes the quality of learning better and the flow of conversation closer to a general conversation in Spanish.

Senior Stephanie Vaughan-Fanizzi, a political science major, said she enjoyed Mesa Hispana during the fall semester because of the informal conversation, the helpfulness of the instructor and the ability to speak with others who were learning Spanish.

“I feel the informal setting makes the event more laid back [and] less intimidating. Learning a new language is difficult, but incorporating learning into informal conversation [and] games helps to retain vocabulary,” Vaughan-Fanizzi said.

Sophomore Kelsey Joyce, an exploratory major, said she enjoys Mesa Hispana because it keeps her thinking about the vocabulary needed in conversation without being pressured to quickly answer questions.

“I like the informal conversation because it gets me thinking. Sometimes it is hard to answer a question, but it’s good that they are very understanding. I can process it and they will help me with something I don’t know,” Joyce said.

Although a majority of the people who attend Mesa Hispana are students currently studying Spanish, others who may not be studying the language are also able to attend.

Benjamin said people from all levels of Spanish, from native speakers to those just starting to learn it, are welcome to attend Mesa Hispana.

The general activity within Mesa Hispana is for people to come together and have informal, Spanish conversations about whatever topics they choose.

Sophomore Rebecca Hohman, a social work major, said she likes being able to practice Spanish “outside of the classroom in a normal conversation setting versus the structure of the class.”

Other Akron students believe Mesa Hispana has helped improve their fluency with the language and understanding of content taught in the classrooms.

Sophomore Bryce Chekan, a public relations major, said he goes to Mesa Hispana to improve his ability to speak and understand Spanish for his classes.

“I have to take four semesters because of my major. So I come to [Mesa Hispana] to increase my knowledge…, improve my ability for tests and actually understand what is going on in class,” Chekan said.

“Being bilingual is beneficial for the job market,” Holmes said. “I took four years of Spanish in high school and I want to be more fluent.”

Overall, I feel Mesa Hispana is a great opportunity for people to improve their Spanish communication skills, make connections with others learning the language and a judgment-free zone where anyone can ask any questions about the language.