The University of Akron Speech and Debate Team competed at the Ohio Forensic Association State Championship this past weekend at Bowling Green State University and won their third consecutive state championship. 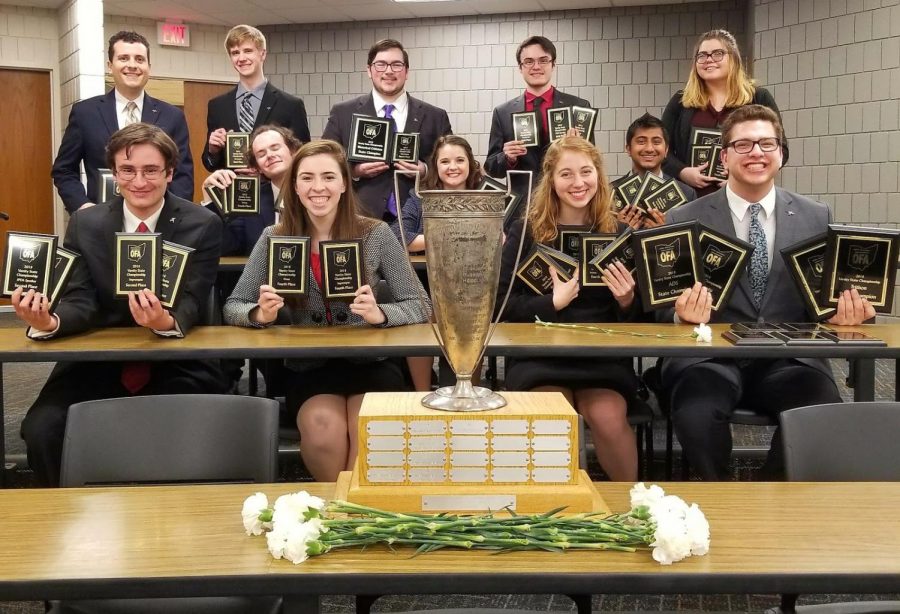 The Speech and Debate Team with their awards.

The Speech and Debate team was led by Director and Coach, Mark Rittenour, and ended the tournament with an impressive score of 412, 300+ points above the teams who won second and third place. Cedarville University earned second place with 89 points, and Bowling Green State University won third with 86 points.

“The massive point-spread at states this year was really exciting for all of us. Winning the OFA State Championship Tournament for us is equivalent to winning a MAC Title in athletics. Two years ago, in 2016, we won the OFA State Championship Tournament by one point. In 2017, we won by almost tripling the score of our closest opponent. This year, we more than quadrupled our closest opponent. That fact simply proves that everyone in our program strives for excellence. We always have a goal to represent The University of Akron with integrity,” Mark Rittenour said.

Preparation for the OFA State Championship Tournament begins in the early fall and students log countless hours practicing and preparing their material to perfection. Students receive feedback and the help of Rittenour along with a group of Rittenour’s former students who help coach, as well.

The Speech and Debate team also took home the cumulative Susan Millsap Founders’ Award and the OFA Debate Sweepstakes Championship, along with the Trithon Award for the fifth consecutive year, and team members altogether won nine individual state championships. Director and Coach of the team, Mark Rittenour also went home with the 2018 Ohio Forensic Association Educator of the Year Award, which hasn’t been awarded since 2012.

“After coaching for 16 years in the Ohio Forensic Association, hosting the state championship tournament several times, and holding leadership positions in the league, winning the 2018 OFA Educator of the Year was especially gratifying,” Director and Coach, Mark Rittenour said.

The individual student award winners were:

“It’s important to know that students on the team do more than one event each, some many events, and preparing involves a combination of developing critical thinking skills, writing and memorizing material for public address speeches. Each prepared speech is eight to ten minutes in length and goes through an extensive research, writing, and editing process before it’s competition-ready and can be memorized,” Mark Rittenour said.

For more information about the Speech and Debate team, contact Director and Coach, Mark Rittenour at [email protected].