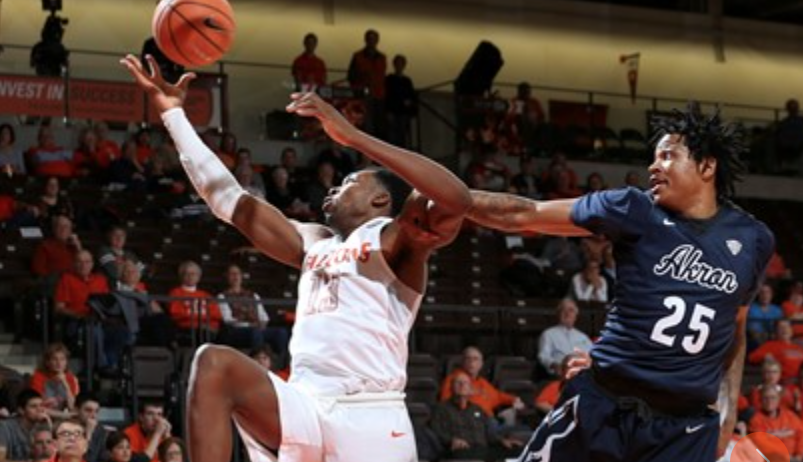 The Akron Zips traveled to the Stroh Center to take on the Bowling Green Falcons Tuesday evening. The Zips managed to win their first road game of the year, winning 81-79.

A game doesn’t get much closer than the contest these two teams partook in. The game experienced 27 lead changes and 12 ties, until the final seconds of the game.

During the first half, the Falcon’s took the lead early doing what they do best, getting the ball inside. Demajeo Wiggins, the junior center from Toledo, Ohio, was the focal point of this game. Wiggins finished with a stat line of 17 points and 12 rebounds.

To answer the Falcons, Zips forward Daniel Utomi got started early, as he managed to make 2 out of the 3 free throws, and from that moment on was hot the rest of the game. The Jimond Ivey and Malcolm Duvivier duo scored a combined total of 26 points, assisting in the Zips road win.

All the Falcon’s competitors played hard as they had four players in double figures. Leading the way for the team, was sophomore guard, Dylan Frye, as the sharpshooter scored 24 points, hitting five three-pointers.

With only 20 seconds left, the Zips were down 78-79, before guard Malcolm Duvivier received a pass from Utomi to take the lead, 80-79.

Falcon Dylan Frye, had a chance to win the game for his team but missed the shot. Teammate, Wiggins managed to get the offensive rebound but was unable to make the putback.

Zips Lucas Smith got the rebound and was fouled. He went on to make one of his two free throws to seal the game the win for Akron.

This match was truly exciting from start to finish, ending with the Zips getting the eluded road win. This win moves the Zips to 12-15 (5-10) on the season.

The Bowling Green Falcons fell too 16-12 on the season, and are now under .500 in conference play with a 7-8 record.The Zips will look for another win as they return to James A. Rhodes Arena to face off against the Miami RedHawks Sat. Feb. 24th at 2 p.m. The match will be aired on ESPN 3, for additional information and tickets visit, gozips.com.