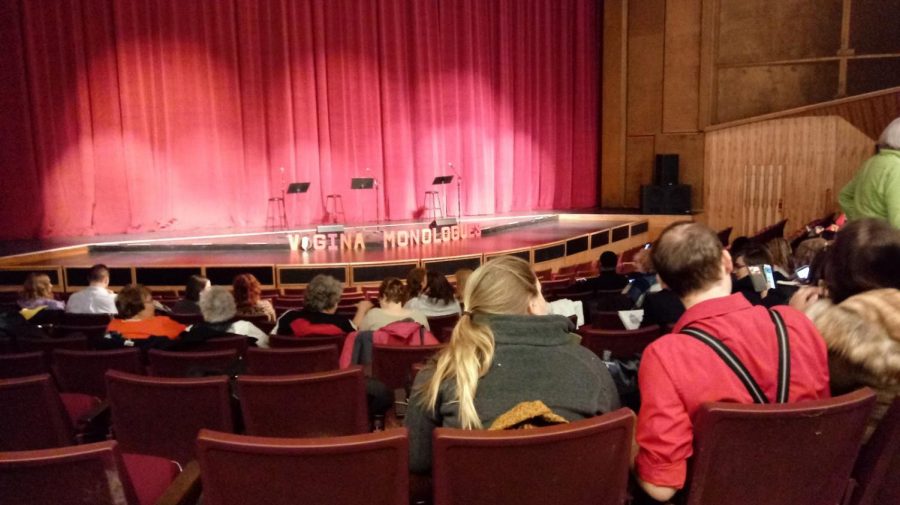 The audience waits in E.J. Thomas Hall for the start of The Vagina Monologues.

On Feb. 3, the Women’s Studies Program and Multicultural Center at The University of Akron sponsored this year’s performance of “The Vagina Monologues,” a compelling play by Eve Ensler that provided an emotional rollercoaster for many of its viewers.

“The Vagina Monologues” was written in 1994 and it was based off dozens of interviews the author, Ensler, conducted with women. The play addressed stigmas surrounding sexuality, rape, abuse, and gender.

In 1998, Ensler decided to make the monologues more than a play; she made it a movement. On Valentine’s Day in ’98 Ensler, along with a group of women, created V-Day. V-Day takes proceeds that come from performances of “The Vagina Monologues” and gives them to organizations that work to end violence against women and girls.

According to the official V-Day website, vday.org, the mission of V-Day is to demand that violence against women and girls must end. To do this, the website said Ensler allows groups around the world to produce performances of the play whose proceeds will go to local projects and programs to help their cause of ending violence. Since its beginning, V-Day has raised over $100 million for local groups, the website said.

The rendition that the Women’s Studies Program and Multicultural Center sponsored benefits the Rape Crisis Center of Medina and Summit Counties. The Rape Crisis Center has an office on the University campus located in the Student Recreation and Wellness Center in room 246.

Not only do the proceeds that come from V-Day go to incredible programs, V-Day and the Vagina Monologues are relatively inclusive. The V-Day website said its mission is not only for cisgender women but for transgender folks as well. This is significant because it gives representation to a group who is left relatively invisible.

“The Vagina Monologues” has its own share of LGBTQ+ representation. In one of the monologues, “The Little Coochie Snorcher that Could,” a girl had her first sexual relationship with a woman after being sexually abused. In the monologue, “The Woman who Liked to Make Vaginas Happy,” a woman, well, you can probably guess from the title what it’s about.

However, most of the play is centered around cisgender women, such as the monologue mentioned above, “The Woman who Liked to Make Vaginas Happy.” In the monologue, the woman made a clear distinction that she equated vaginas with women, which is not inclusive of transgender folks.

There is some transgender representation in one of the monologues, “They Beat the Girl out of my Boy…Or So They Tried.” However, one monologue out of the many in this play may not seem like enough representation, especially to those who are expecting the representation.

“The Vagina Monologues” has enough representation to make it enjoyable to the modern day intersectional feminist, but it could be more. Luckily, the V-Day campaign makes up for some of the lack of transgender people’s representation by directly stating that it is inclusive of the community.

In the future, I would like to see V-Day be even more inclusive of the transgender community. It is a community that faces violence and discrimination often. According to the most recent report from the National Coalition of Anti-Violence Programs’, in 2016 there were 28 homicides of LGBTQ people. These statistics do not include the deaths that occurred at the Pulse Night Club in Orlando, Florida. Out of the 28 homicides, 68 percent of the victims were transgender and gender nonconforming people.