Delta Zeta Gives Gift of Hearing to All 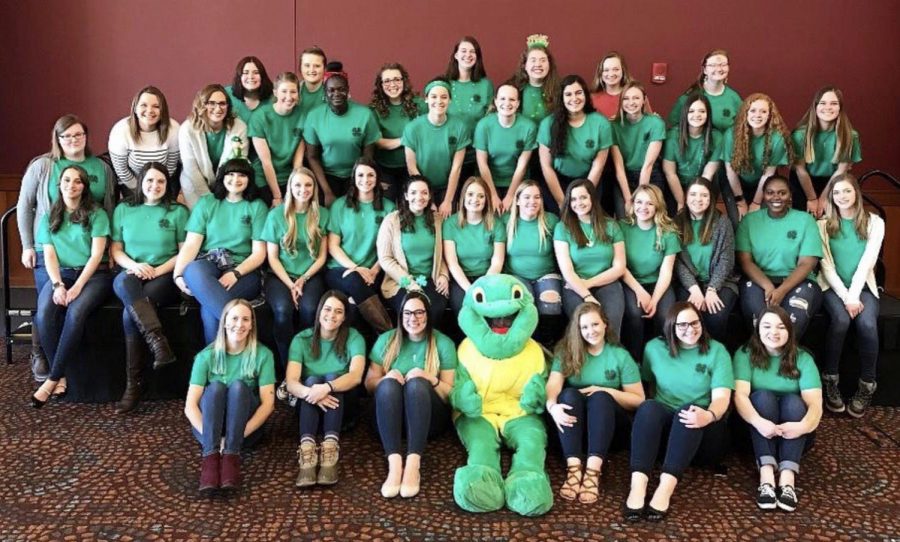 The event, held in the Ballroom at the Jean Hower Taber Student Union, was organized to raise money for the Starkey Hearing Foundation, a global organization that provides hearing aids to those who cannot afford them. The foundation provides more than 175,000 hearing aids to people around the world each year.

In exchange for tickets purchased to raise funds for the foundation, attendees were treated to snacks and refreshments while games and activities were put on by sorority members. A video highlighting Starkey’s mission was shown to the audience at the conclusion of the event.

“We wanted to come up with a fun and creative event. Not only to involve other Greek chapters but the Akron community as a whole. Hearing loss is something that affects people of all ages all across the world so this is a cause that is very important to us. Our sorority’s national goal is to raise $5 million in five years for Starkey, so the money raised at this event goes towards that goal,” Zoë Sommers, Vice President of Philanthropy for Delta Zeta, said.

The Starkey Hearing Foundation, a division of Minnesota-based hearing aid manufacturer Starkey Hearing Technologies, was founded in 1984 by William F. Austin with the goal of giving the gift of hearing to those in need.

Hearing loss can be defined as ranging from being “hard of hearing” to profoundly deaf. While many congenital cases are found to be present in individuals at birth, other acquired causes of hearing loss later in life include illness, head and ear injuries, and constant exposure to excessive noise.

According to the World Health Organization, around 466 million people suffer from hearing loss worldwide, with 34 million of those being children. Additionally, the majority of these cases originate from impoverished countries where access to healthcare and life-changing hearing technologies are sparse.

Starkey strives to reach as many of those people as possible.

“The Starkey Hearing Foundation is our national philanthropy partner. They support speech and hearing, a cause very near and dear to our hearts. The foundation works to provide hearing aids and speech therapy to those in need in over 100 countries. So far they have benefited 1.1 million people,” Corina Harvey, President of Delta Zeta, said.

Since 2006, Delta Zeta chapters across the nation have joined forces with Starkey to crusade for the cause of speech and hearing. At UA, the sorority raised upwards of $2,000 at Sunday’s “St. Paddy’s Fest.”

“We are very appreciative of everyone who came out to support us and we cannot wait to give our proceeds to this wonderful organization,” Sommers said.

Every year, the foundation hosts the “So The World May Hear Gala,” a star-studded celebration to honor those who have contributed to Starkey’s mission. The event is typically attended by celebrities and Presidents, many of whom have made contributions themselves. The 2017 rendition of the gala saw record attendance and more than $7 million raised.

For more information about the Starkey Hearing Foundation and how you can help, please visit their website.