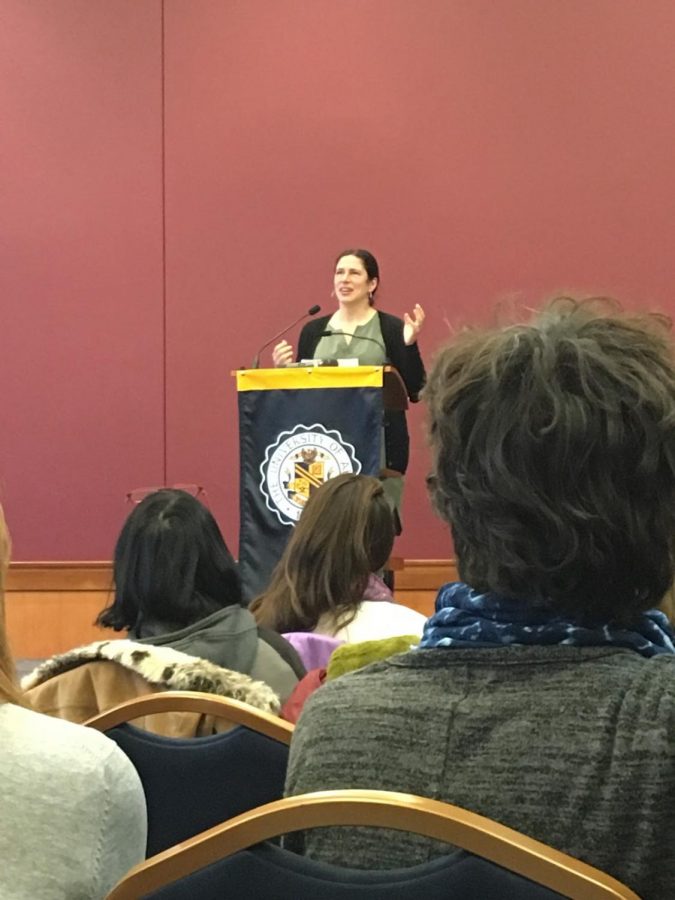 Author Rebecca Traister speaking about her book at The University of Akron.

On March 14, New York Times best-selling author, Rebecca Traister came to The University of Akron to speak about her book, “All the Single Ladies: Unmarried Women and the Rise of an Independent Nation.”

The event, hosted by The University of Akron Women’s Studies program, provided a discussion about how marriage has affected women and society throughout history. At the lecture, Traister said that she first got the idea for this book when she got engaged to be married at the age of 35 and realized that people were treating her like she was just entering adulthood.

Traister stated that before she was an author, she was a feminist journalist for many years writing about changing marriage rates in the United States, so she had some prior knowledge of this topic but had not investigated it to this extent before writing her book.

This event caused Traister to begin seeing just how archaic some of our practices surrounding how we treat couples entering marriage still are. Traister recalled that friends and family still bought her and her soon to be husband dishes and other housewares despite the fact they had been keeping their own homes for more than a decade. “We needed a registry for people to take away our dishes,” Traister said, in a joking manner.

During her lecture, Traister discussed many of the topics she researched while writing her book. These included the origins of marriage, power structures within marriage and the role this played in society and the role single women have played in activist movements throughout history.

“She did a wonderful job explaining the contributions of unmarried women and gave myself perspectives that I have never thought of. I would definitely recommend other to go listen to her talk. She is educated, wise and experienced,” said Evan Wasen, a UA student who was present at the event.

After her lecture, Traister took questions from the audience where she provided insights about the nature of societal change and how that can come. She encouraged women in the audience to run for political office if they were passionate about fighting for women’s rights.

After the question and answer portion of the program, participants then moved to a catered reception where Traister signed books and mingled with event attendees.

To learn more about Traister and her book you can visit her website here: http://www.rebeccatraister.com/