As the only all-female a cappella group at The University of Akron, Kanga Blue offers female singers opportunities to continue their passion for music. 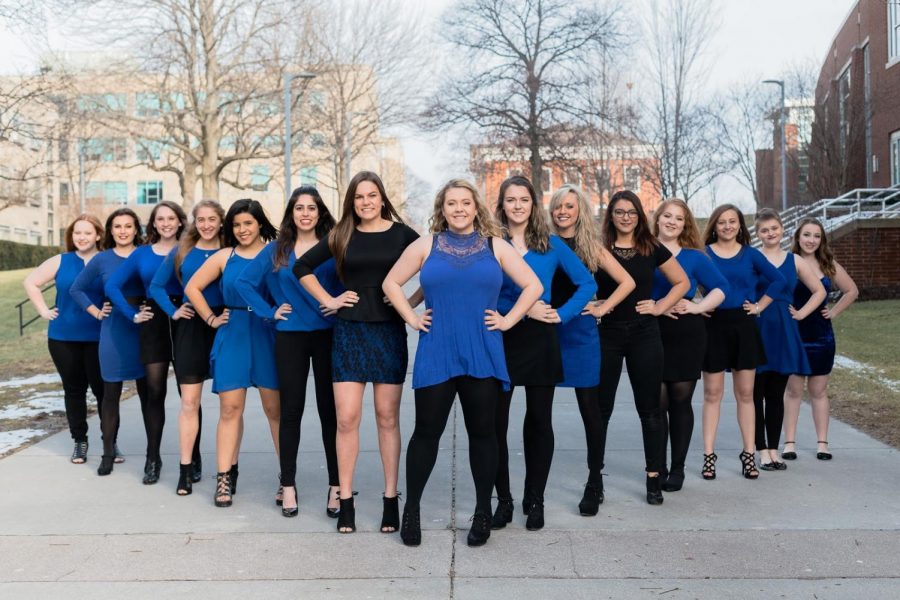 Victoria Schurr, the President of Kanga Blue (center) said the group’s name is a play on The University of Akron’s mascot, the kangaroo. (Photo courtesy of Adam Michel)

Originally founded in the fall of 2010 by Dr. Dale Mugler, a previous Dean of the Honors College, Kanga Blue is one of the three a cappella groups and the only all-female group at The University of Akron.

Dr. Mugler started Kanga Blue after realizing there was “a lack of opportunities for female singers” on campus and there were limited member positions available in the coed a cappella group, Victoria Schurr, President of Kanga Blue, said.

The initial goal of Kanga Blue was to provide a space on campus where female-singers would have the opportunity to get together and practice singing and performing in an informal setting.

“Then as more members wanted to take it on, they wanted to make it something bigger than that,” fourth-year student, Annie Mizner, Secretary and Head of the Decorating Committee for Kanga Blue, said.

However, it wasn’t until April of 2014, when the members of Kanga Blue performed their first biannual concert, that The University of Akron recognized the group as an official student organization.

Today, several members and executive members of Kanga Blue could not see their college career being the same without the a cappella group being a part of their life.

When Schurr first learned of Kanga Blue as a freshman, she had no previous professional singing experience from high school and didn’t want to take part in the a cappella group.

“I actually had no interest in being in Kanga Blue,” Schurr said. However, Schurr said she had two friends who knew the male a capella group and they asked her to audition for the female group.

After changing her mind and auditioning for Kanga Blue, Schurr said she had made one of the best decisions in her life because the group quickly felt like a family and has been one of her biggest passions at the University.

Senior Sophie Cressman, a current member of Kanga Blue, also believes the other members have become an on-campus family to her and have taught her several different skills she plans to use in her future career as a Veterinarian.

Freshman Sydney Schermond, a new member of Kanga Blue, has learned how to feel more confident in herself through the friendships she has made and the ability to perform on stage with the group.

“It’s really taught me a lot about myself and I am starting to step out of my shell a little bit,” Schermond said. “I’m not always the most confident person, but Kanga Blue is definitely helping me get better at that.”

Many members believe Kanga Blue is a great creative outlet at the University where they can de-stress, be a part of something bigger and continue their passion for music.

Junior Jasmine Zogheib, a current member of Kanga Blue, said she is able to take a step away from the stress in her life during rehearsal through either talking or singing with the group.

But things have not always been easy for Kanga Blue due to the fact that they are the youngest a cappella group at The University of Akron and still learning different ways to overcome obstacles as a whole.

Junior Lauren Spape, Musical Director for Kanga Blue, said one of the challenges the group faces is promoting themselves on campus since they are still pretty new compared to the other groups.

“There are still so many students at the University that have never heard of us,” Spape said. “To overcome this challenge, we have been increasingly active on social media.”

Through the use of social media and an official website created by Schurr, Kanga Blue has grown in the past few years in regards to the number of people reaching out, attending performances and auditioning to become a member.

Since the increased efforts in promoting the group online and on campus, Kanga Blue has been asked to do more outside performances and gigs than ever before, Schurr said.

Although Kanga Blue is still facing obstacles and figuring out different strategies to promote themselves, many still believe that being a member has not only empowered them but influenced the empowerment of women in general.

“I find it really empowering that Kanga Blue is all girls. I am all for that,” senior Alexia Santiago, a new member of Kanga Blue, said. “I think it’s really special just having a group of girls come together and be able to accomplish the things that we do in the amount of time that we do.”

Along with being proud to influence the empowerment of women, the members of Kanga Blue enjoy the strong musical sound they are able to produce individually and as a whole.

“We’re a big fan of sounding like a badass girl group, because we really do want people to know we’re strong women,” Zogheib said. “We all have different stories, but the one thing that we all absolutely have in common is that singing is a big part of our lives.”

Kanga Blue’s final performance of the semester is their Spring Concert, which is on April 27, 2018, at 8 p.m. in the Leigh Hall Auditorium. The event is free and anyone is welcome to attend. Doors open at 7:30 p.m.

“A cappella is more than just singing,” Zogheib said. “If you come to our concert, expect some sick dancing and beatboxing.”

The members of Kanga Blue encourage anyone who attends their spring concert to show their Kanga Pride by wearing as much blue as possible for a small contest. The winner of the contest will receive a small prize.

For more information about Kanga Blue’s upcoming performances or how to become a member, visit the official Kanga Blue website or email Victoria Schurr at kangablueacappella@gmail.com.