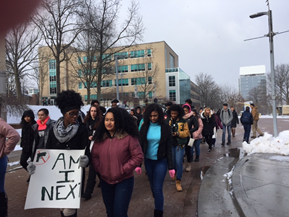 Students march at start of the UA walkout.

One month after a gunman took the lives of 17 students and faculty members at Marjory Stoneman Douglas High School in Broward County, Florida, a nationwide school walkout took place on March 14, to memorialize the lost and advocate for legislative action to limit access to automatic weapons. UA freshman Samara Rice, Elizabeth Duncan and Noah Spinner–both admitted to UA’s class of 2022-participated in local events, each with a unique, yet unified, perspective on the issue.

“Our children need to be protected from guns…”

On the morning of March 14, students and other advocates gathered outside Bierce Library despite the bracing cold to express solidarity and support for the lost and their loved ones and to publicly implore our elected leaders to enact legislation that would limit access to automatic weapons.

Samara Rice, a participant at the UA campus walkout, noted that a similar event was taking place at her high school in Cleveland. She expressed gratitude for the opportunity to participate in this event.

“I do not like the fact that everyone has access to guns…,” Rice said, “because if you are a child you should not have access to guns. Our children need to be protected from guns not taught to use them.”

“It could have been my school.”

As the snow squalls continued in nearby Richfield, Elizabeth Duncan walked out of class with approximately 100 other students at Revere High School. Earlier in the week, school administrators warned students that participation in an unsanctioned event would result in disciplinary action.

Undeterred by the admonition, Elizabeth and her classmates assembled on the football field at 10:00 a.m. She quietly announced the name of each victim, while another wrote those names on a poster. A 17 second moment of silence followed. Each student added his or her name before returning to class.

“This needs to end.”

Noah Spinner, an organizer for a walkout at Cuyahoga Falls High School, stated we should hold our elected officials accountable. Spinner said far too often government officials forget who their boss is, who pays their salary, and who they are to respect and serve. They call themselves politicians before public servants. this needs to end, he said.

Those sentiments have inspired Spinner to run for elected office. At the age of 18, Spinner is a Democratic primary candidate in the Ohio House of Representatives, District 36.

When asked their opinions on remedies, Rice, Spinner, and Duncan indicated they support a ban on automatic weapons and universal background checks.

All three stated they do not own, nor live in a home with firearms. These three students represent a growing and vocal contingent of the U.S. population. They are registered and eager to vote. There are indications that their views are in the majority.

A recent poll commissioned by CNN and conducted by SSRS finds that 71% of the respondents favor restricting access to firearms for those under the age of 21. The same poll finds that 57% are worried that they or someone in their family will become a victim of gun violence.

Could bridging that divide be as simple as listening to, and validating, divergent opinions? In that spirit, multiple attempts for input were made to the UA Zips Rifle Club. As a nationally recognized student organization and winner of the 2017 National Rifle Association Intercollegiate Rifle Club National Championships, its members could offer thoughtful counterpoints to an important national dialog. At the time of this report, the UA Zips Rifle Club has not responded.

As threats escalate, will calls for change prevail?

As public support for regulatory reform swells, the Educator’s School Safety Network reports that school threats have increased at a rate of 70 per day following the incident at Marjory Stoneman Douglas High School. In spite of such troubling statistics, it becomes increasingly clear that legislative remedies are unlikely to occur anytime soon.

Where does this leave the young activists? Will the deliberative pace of legislative reform stymie their passionate voices? That question remains unanswered, but one thing is clear. The escalating threat of school gun violence in America leaves today’s young adults feeling exasperated.  “I don’t want anyone else to die,” Elizabeth Duncan said. “Enough is enough.”