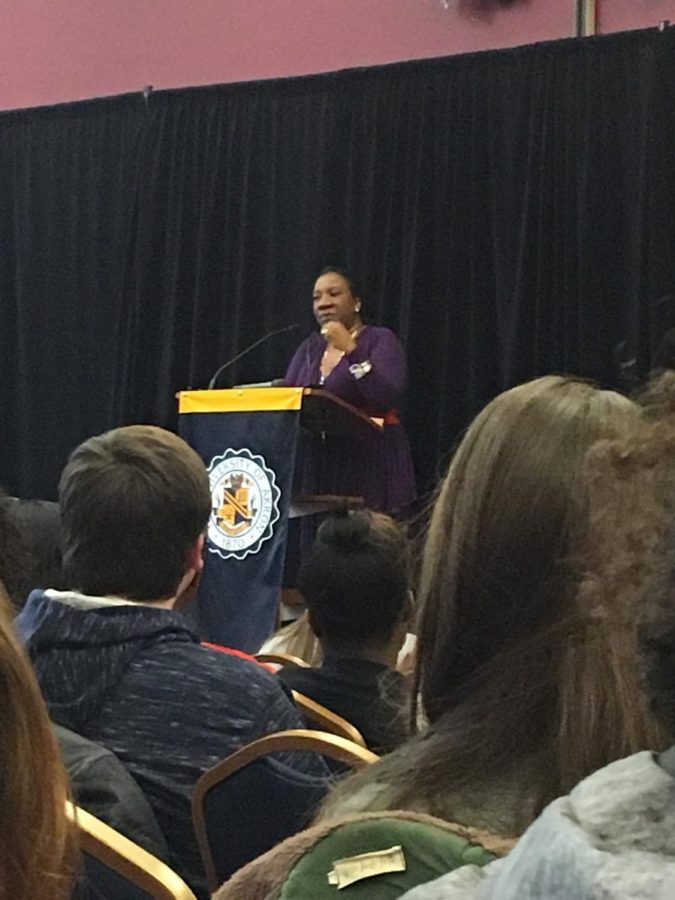 On Tuesday, April 17th Tarana Burke, founder of the #MeToo movement spoke at The University of Akron.

Burke began the lecture by dispelling some of the rumors she had heard and seen about herself on the internet by stating in a joking manner that she was indeed from the Bronx, New York and not Queens, New York.

Burke then took her story far beyond the Me Too hashtag by explaining her history as an activist. Burke stated that she was born with the ability to see injustice when it happened and to then seek justice for what she had witnessed and she told the crowd that she began her journey as an activist at the age of 14. Burke also stated that when she first started out as an organizer she did not do any advocacy work specifically focused on sexual assault.

Burke then recounted the tale of the event that led her to begin to believe sexual assault was a problem deserving more attention than what was being given to it. Burke stated that she was working at a summer camp (which she had also previously attended as a child) where they did a breakout session each year where they would split up the boys and girls and have them talk about anything they wanted them to.

Burke said that during one of these sessions a child she calls Heaven was trying to tell the story of abuse she suffered to the group but found herself unable to. Later that child approached Burke and recounted her story to Burke who found herself left not knowing what to say to this child. “All I could think to say to her was me too,” Burke said.

Burke then realized that most programs geared toward empowering girls were more about proper etiquette and having career goals. This caused Burke to begin searching for what resources girls did have when it came to battling sexual assault and she found virtually nothing.

Burke decided to begin creating resources for girls that would help give them the language to describe the assault many of them were experiencing. Burke then began promoting the program she created in local schools in Selma, Ala., where she was living at the time, and the movement began to pick up speed.

After a MySpace page for the program was created before it was moved to Philadelphia, PA many women started reaching out to Burke to ask how they could become involved. Burke’s program continued to grow by adding a part specifically geared toward boys and by giving grown women who survived assault tools to heal as well.

Burke then discussed her movement going viral in October 2017. Burke stated that at first, she was fearful of being erased from her work, but finally realized by the end of the day that she was witnessing all of her advocacy work before her eyes.

Burke then touched on changing the narrative surrounding her movement by stating that, “it’s not a movement about tearing down men, it’s not a women’s movement, it’s a survivor’s movement.” Burke then went on and said that her movement’s goal was to supply women, especially in marginalized communities, with accessible resources to help them fight sexual assault.

In Burke’s closing remarks she said, “In the first 24 hours of #MeToo there were 12 million engagements just on Facebook. Were these engagements an actual disease that 12 million people were affected by in just one day, every single doctor in the world would be looking for a cure.” Burke related this to sexual assault and urged the audience to begin asking bigger questions about how they can battle sexual assault within their own communities.

“I thought her message was really powerful about how it’s a survivor movement and how we need to think about it not as men being awful people who need to be punished but more of, we need to get resources out to these women and to marginalized communities,” Grae Pollard, a sophomore at UA said .

“I liked how she talked when children are younger and informing them now and making them ready and teaching children at a young age what boundaries are. And, I liked that she said we need to not just give women the resources but to teach men and perpetrators as well how to not commit sexual violence,”  Noelle Warther, a junior at the University said.

To learn more about the Me Too movement visit their website.