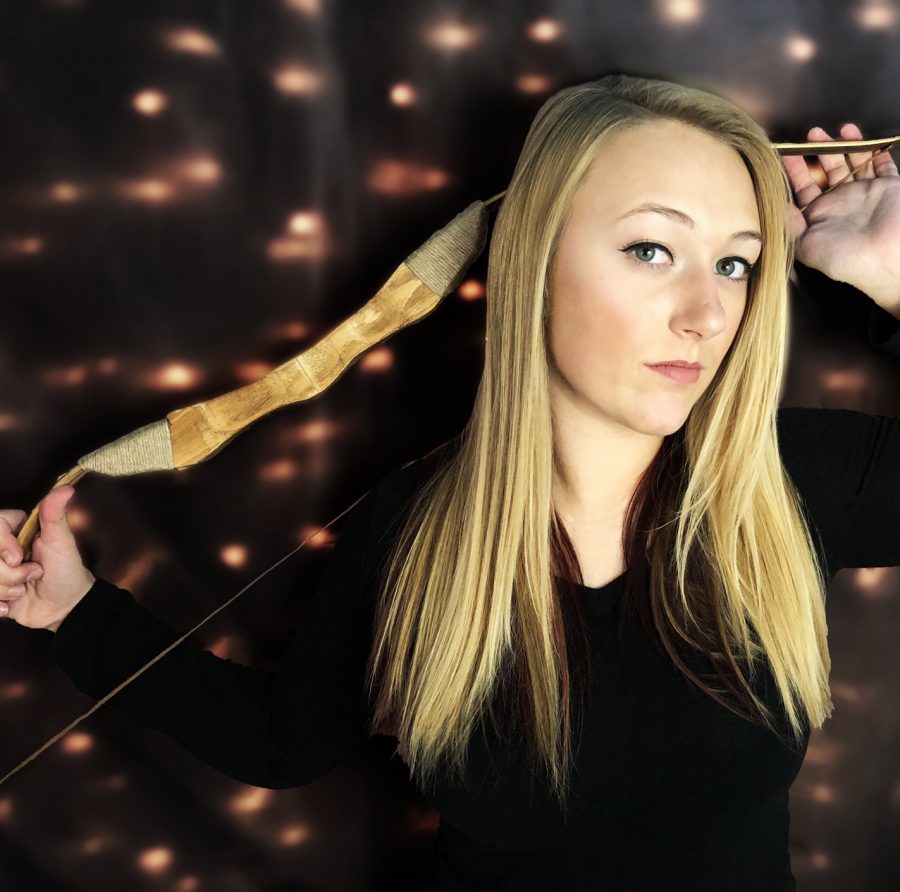 Brenna Lynn created the cover of her album using white Christmas lights and a sheet hanging in her bedroom. (Photo Courtesy of Brenna Lynn)

While playing one of her original songs, titled “Arrows,” Brenna Lynn stopped for a moment and thought about ways she could include her passion for music into her busy schedule as a college student.

“I’m in school, kind of grumbling about it at all times, doing everything I’m supposed to be doing; following directions with my nose in a book,” Lynn thought. “And all I want to do is play music.”

Putting her guitar down, Lynn told herself to break the rules and do something in life that she wants to do: create music while in school. After that moment, Lynn began researching the process of self-producing music.

Lynn recently performed at Akron’s Got Talent, which was hosted by ZPN, singing “Royals” by Lorde. As one of her musical inspirations, Lynn views Lorde as a powerful songwriter.

Nonetheless, Lynn prefers to write original lyrics and compose her own music because she feels her emotions and personality are then better expressed.

Lynn said she has been writing songs since the moment she could pick up a pencil through constantly creating different tunes and melodies. Then, Lynn’s songwriting grew after finding an instrument to accompany her lyrics.

“My writing really exploded when I first picked up a guitar at 13,” Lynn said. “I fell in love with the instrument, gravitating towards it because I could both play and sing my words at the same time.”

Later, Lynn learned how to play several different instruments. According to her website, Lynn is able to play the following: guitar, ukulele, violin and drums.

When writing the lyrics for her songs, Lynn doesn’t think about the people who will be listening to them. The lyrics in her music come from releasing stress, thoughts and more.

“I write to cope, love and live,” Lynn said. “I’m a writer before anything else. My favorite instrument will forever and always be the pen.”

However, when the time came for Lynn to record and release her original music, the process became a huge challenge due to being a full-time college student with two jobs.

Working with the budget and schedule of a normal college student, Lynn spent most of her time researching the best equipment at low prices until she had saved up the money to purchase everything she needed.

“It got very difficult. I had to research, read, watch videos and learn like crazy,” Lynn said. “But now I’m a DIY professional. I recorded, mixed, mastered, engineered and produced the music all by myself: all from my bedroom.”

Since learning how to self-produce music and what the best equipment is on a budget, Lynn has shared her knowledge on YouTube to help teach other songwriters and musicians in similar situations.

Through her informational videos, Lynn hopes to efficiently and accurately show musicians how to have potential in the professional field when starting with a low budget and little experience.

Lynn said another reason she began sharing her knowledge on YouTube is because of the difficulty with finding other female artists with videos involving technical audio information.

“The music industry is pretty dominated by men, which is okay. But sometimes it helps to get a woman’s perspective, especially when you’re recording a female’s voice or recording music that is written by a girl,” Lynn said.

On Saturday, April 14, Lynn accomplished her goal of self-producing music through releasing her first album, which she titled “Arrows” after the first track on it and the song she was playing when deciding to break the rules.

“The song is all about doing what it is that you want to do. Not listening to everyone else that tells you what you should do,” Lynn said. “One of the lines is actually ‘It’s about time to make objections, I’m sick of following directions.’”

“With a coffee shop voice and a personality big enough to fill a stadium”, Lynn said, all five of the songs on Lynn’s album follow a similar theme of “doing what you need to do, being genuine and growing.”

Each track on the album was inspired by a different life experience, challenge or obstacle Lynn has faced or the people who have influenced her life.

One of the tracks on Lynn’s album relates to the topic of consent. The song, titled “No,” is an a cappella piece that is different than anything Lynn has ever written before.

“It was inspired by a time when someone wouldn’t leave me alone at a bar, making me incredibly uncomfortable, despite the fact that I was trying to tell them no,” Lynn said. “I was so frustrated with the way I was being treated and looked at.”

Since the issues of sexual harassment, assault, and misconduct have been gaining attention on social media, Lynn wanted to help the awareness of these issues grow through the lyrics in her music.

“It’s crazy how many women, especially women on college campuses, have stories similar to, or even much worse, than this,” Lynn said. “I wanted to create an intense song, built only with my voice, to remind everyone how powerful that two letter word really is.”

Nonetheless, the main thing Lynn wants people to receive from her music is the ability to connect, in some way, with the meaning and feeling behind each song.

Lynn believes college students will be able to relate the most with the meaning behind her lyrics since several are at the same point in life or have similar experiences.

To receive a physical CD of Lynn’s album, click here for purchase with PayPal. The price of the album is $5. Lynn’s album is also available on iTunes for 99 cents a song, or through streaming services such as Spotify.