Firefighters worked hours into the night to get the fire under control and prevent it from spreading into the second portion of the building. 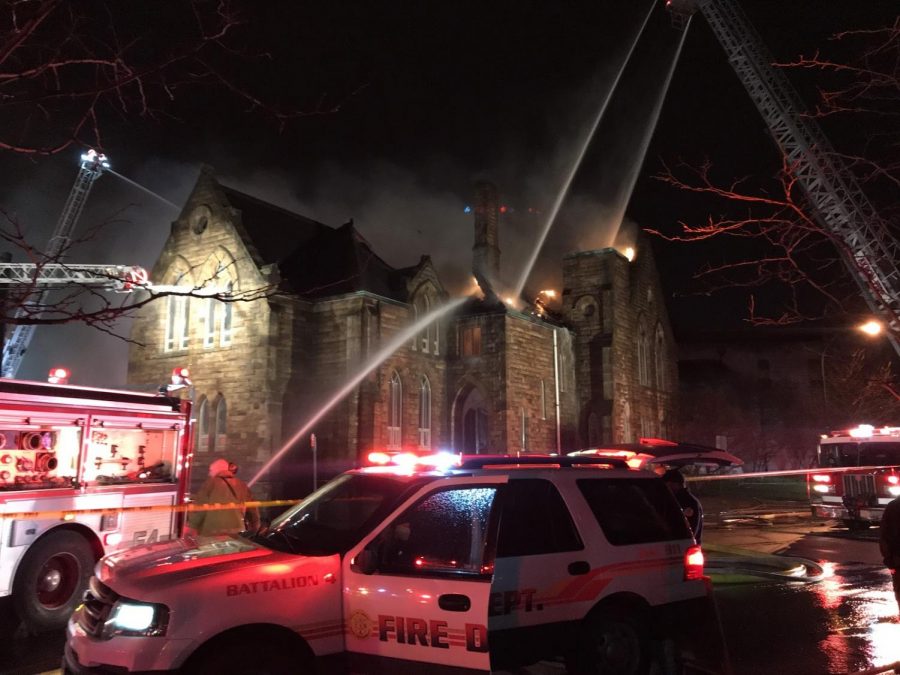 Flames shoot through the roof of the former UA Ballet Center.

By Jake Herron and Megan Parker

One of The University of Akron’s historic buildings went up into flames late Wednesday, April 18, 2018, in a fire that caused a building nearby to close due to poor air quality and took hours for emergency responders to put out.

Around 11:30 p.m. Wednesday, the University of Akron Police and Akron Fire Department received reports of smoke and flames in the old St. Paul’s Episcopal Church at 354 E. Market St.

The Akron Fire Department closed East Market Street at North Forge Street most of the day Thursday, April 19, due to the extent of the damage and debris caused by the fire.

The C.P. and Cornelia Chima Family Center also closed Thursday due to poor air quality from the smoke and debris across the street.

Although they were unable to combat the blaze inside the building due to safety precautions, firefighters were able to put out the main body of fire within four hours by using the hole in the roof as an access point.

However, a total of 12 hours of work had been put in by the fire department to ensure the blaze was completely put out before vacating the area, District Chief Dave Hull said.

“We got the fire put out quick. We didn’t have any injuries,” District Chief Hull said. “We kept it from extending to the second building, which we thought was very good that we could save that building, especially with the nice glass in there.”

The cause of the fire is not yet known and is currently being looked into by the arson investigators.

During its history, the old church was involved in the founding of Alcoholics Anonymous. St. Paul’s worshipped at the site until 1952 when UA purchased the buildings thanks to a donation from the Firestone family.

The University used the old church as the Firestone Conservatory of Music and Ballet Center for the UA Dance Program; also housing the Dance Institute — a program for students in elementary school and high school — and the former Ohio Ballet professional dance company.

Then, in 2006, the University moved the Ballet Center from the church to new additions of the Guzzetta Hall on campus.

According to the Akron Beacon Journal, original plans to demolish the old church were discarded in 2016 when a group of preservationists called for the University to create alternate plans for the building.

“It was a landmark, they couldn’t tear it down,” Camer said.

Whether or not certain parts of the old church will be salvageable is to be determined by the building’s engineers and The University of Akron.

An inspection of the damage began Thursday and will continue for an undefined period of time, Nathan Mortimer, UA’s vice president for finance and administration, said.