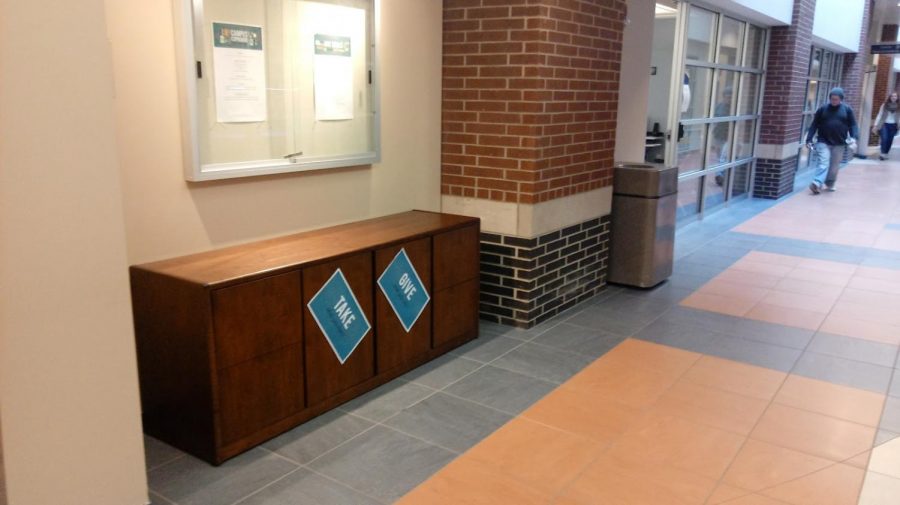 The food pantry found in the Student Union.

The Campus Cupboard provides a temporary solution to the ongoing problem of food insecurity among students at The University of Akron.

Campus Cupboard is a pop-up food pantry located on the first floor of the Student Union. Students in need of food can pick up goods from the station at any time during the Student Union’s hours of operation.

“We know for sure there are students who are food insecure. We know that there are people in our community who struggle on occasion. Some for long periods of time and others on occasion based on the time of the month,” Anne Bruno, the director of the Student Union, said.

The Recreation and Wellness Committee of the University Council is in the process of gathering data via a survey to fully understand food insecurity at UA. Nationally, food insecurity is a problem among college students. In a study done by Katharine M. Broton and Sara Goldrick-Rab called “Going Without: An Exploration of Food and Housing Insecurity Among Undergraduates,” they found that about half of college students are food insecure. The University may find similar results after they finish their research.

A food pantry is something students have been advocating for over the past year. During the fall semester, a group of students wanted to open a food pantry in Quaker, Taylor Bennington, the president of undergraduate student government, said. Though liability issues kept them from implementing it, he said.

However, USG has been able to work with General Council and the administration to implement Campus Cupboard, a safe, controlled pantry, Bennington said.

The Campus Cupboard was modeled after a food pantry at Ohio University, Bennington said.

USG provided the initial funding for food for the pantry, but members of the administration, such as Bruno, helped push the idea forward. Bennington said that Bruno was the person who was able to secure the spot in the Student Union for it.

Students, faculty and staff are welcome to donate any non-perishable food items to the pantry. They can simply leave the items in the cupboard.

Other resources for students in need can be found in ZipAssist. Some of these resources include grants for students who need emergency financial assistance and gift cards to various grocery stores.