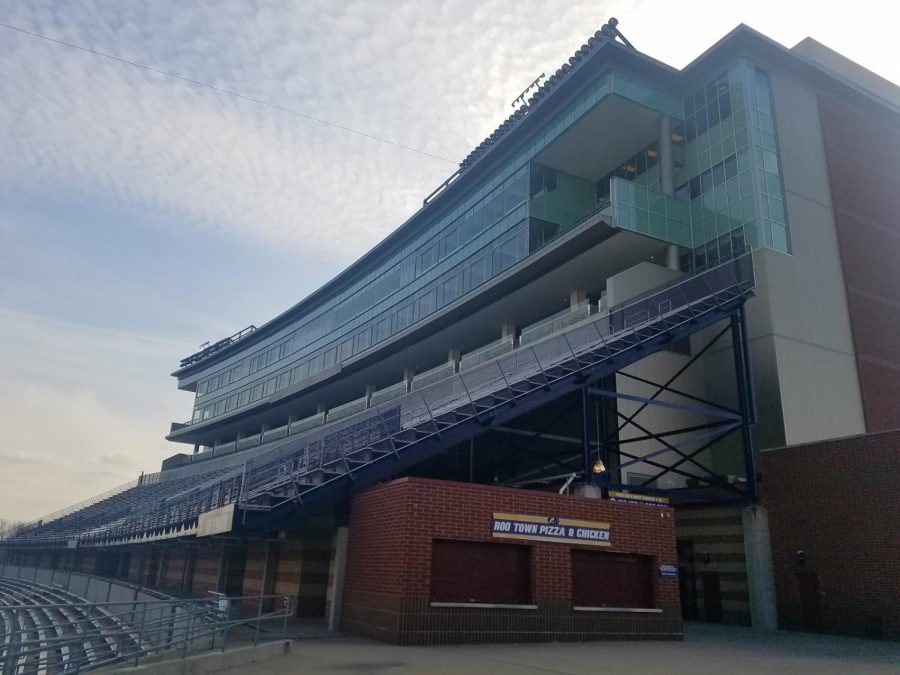 At the beginning of April, I attended a talk at The University of Akron by Dr. B. David Ridpath. Afterward, I wrote an article reporting the happenings of the event but I feel more needs to be said about athletic spending, particularly at UA.

Walking throughout Akron’s campus, several newer-looking buildings will probably stand out to visitors. These are also the stops I recall making when I toured the University as a high school senior. The Buchtel College of Arts and Sciences, the Williams Honors College, the Recreation and Wellness Center, the Jean Hower Taber Student Union and Infocision Stadium are all gems on Akron’s campus. These and other buildings certainly deserved to be celebrated and utilized to their maximum potential.

But this is not the case for all of these new parts of campus, in particular, the football stadium. In my four years at the University, I can really only say I have seen one successful football season and it may not even be one that warrants the mammoth stadium the team plays in for six games each year, seven if we count the spring intra-squad scrimmage.

Infocision Stadium is built for an NCAA Division I football team, but the stadium can seat 27,881 according to gozips.com. The official capacity is 30,000 which ties Akron for the second smallest among D-I schools. For reference, the Rubber Bowl, which served as the team’s home field from 1940 to 2008, had a capacity of 35,202.

Ridpath discussed what he sees some if not all non-Power 5 schools doing, which is being D-I in name only. For those who are unfamiliar, “Power 5” denotes a school who is a member of one of the major five football conferences in D-I. These conferences are the  ACC, Big 12, Big Ten, Pac-12, and SEC. Part of Ridpath’s thesis is that spending more on athletics does not translate to increased success; at the end of the day, Ridpath said, the best players and coaches will go to the best schools.

The history of Akron Football is an interesting one. A Philadelphia Inquirer report shows that UA was the first school to jump from FCS (Division I-AA) to FBS (Division I-A).  At that time, UA hired Gerry Faust, a big name NCAA coach, in an effort to jumpstart the program’s success. However, since joining FBS, the program has not experienced sustained success.

Since joining D-I, the Zips have arguably only experienced a few successful seasons. In 30 years of FBS play, the Zips have had a record above .500 only eight times with three division titles and one conference title. In 2015, possibly the Zips best season since switching divisions, the Zips won their first and only bowl game and did not win their division. So, what am I telling you? It’s clear to anyone associated with UA that the football program has not been a solid program, despite some instances of success.

The question both Dr. Ridpath and myself want to look at is the potential of the program. Dr. Ridpath discussed Ohio State football in his presentation and asked the audience several rhetorical questions comparing the Zips and Buckeyes. It must be asked whether Zips football will ever compete at the same level as Ohio State; will the Zips ever contend for a national championship? We ask these questions because of what Dr. Ridpath called the “winner-take-all lottery” that is big-time college football. Dr. Ridpath believes that schools like Akron, Kent State and Ohio University will never achieve the same level of success as Power-5 schools. This is what he means when he says “D-I in name only.”

At least one school has already come to this realization. The University of Idaho will be the first school to move from FBS to FCS football. This decision was made in light of the three winning seasons Idaho has had since upgrading to the FBS in 1997. “At Weber State, we had FCS football and D-I basketball,” Ridpath said, referencing his time at Weber State. Ridpath said this model worked well and avoided most of the pitfalls he mentioned in his presentation; this allowed both programs to work within a budget and be competitive.

Simply put, Ridpath and I both agree that spending does not lead to success, and furthermore, success does not lead to spending. The Zips football program has not been successful in the FBS, with the current way the FBS is set up, The University of Akron Zips football team will never win a national championship, nor will they ever have the opportunity to do so.

In 2016, the Western Michigan University football team completed a perfect regular season and won the MAC conference, the Broncos were 13-0. They did not receive an invite to the College Football Playoff. This is the best season any MAC school can ever have, yet it was still not good enough. The University of Central Florida football team also had an undefeated season in a non-Power 5 conference in 2017, even beating two AP Top 25 teams, but they too were denied a bid in the CFP.

Even our beloved Zips had a miraculous season such as this, the evidence is clear that it would still not be enough. Other notable non-Power 5 teams that have gone undefeated in recent years and have not played for the national championship include Boise State in 2006 and 2009 as well as Utah in 2004 and 2008.

Meanwhile, situated almost directly next to Infocision Stadium is the Akron Men’s soccer team who plays at FirstEnergy Stadium-Cub Cadet Field. The team has won 17 regular season conference titles, 14 conference tournaments and has been to the College Cup five times, winning it once in 2010. However, their success will never outweigh the perceived, and incorrect, benefits of having a D-I football team.