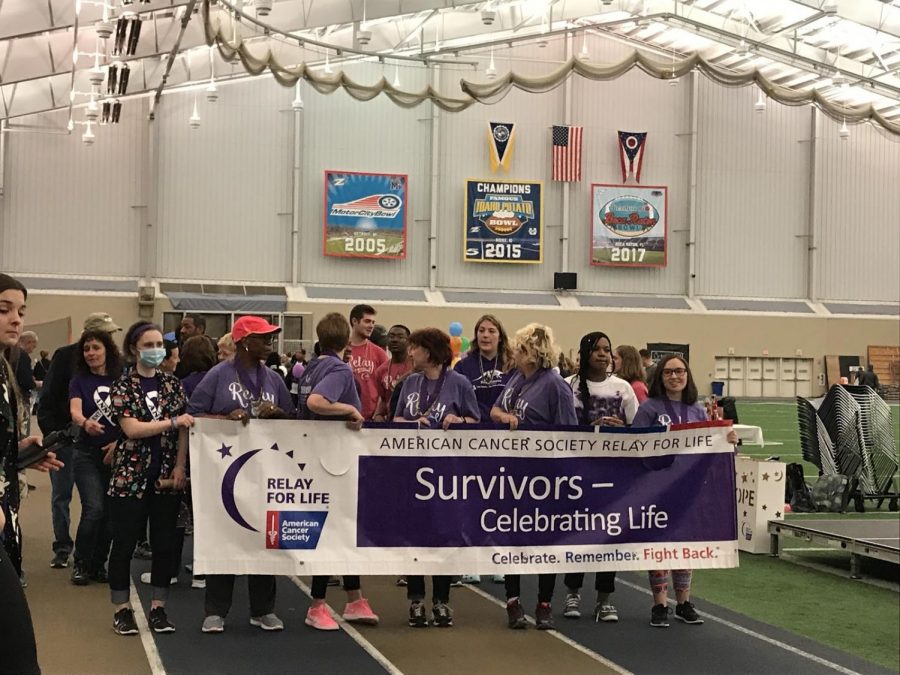 Relay For Life is a fundraiser event of American Cancer Society. It is staffed and coordinated by volunteers in more than 5,200 communities across 20 countries in the world. It is a team fundraiser event where people get together to organize themed campsites at the venue. They organize games, activities and sell food to raise money and donate the proceeds to the American Cancer Society. Each event takes place with a member on track, to signify that cancer never rests, neither do the patients.

Every year, the Relay For Life event is organized on The University of Akron campus by volunteers of Akron Against Cancer. Akron Against Cancer is one of the college chapters of Colleges Against Cancer, a nationwide organization comprising college students, faculty and staff who work towards eliminating cancer. “We are a group of students who were touched by cancer in some way. We get together to support each other and organize this event to raise funds,” Olivia Cole, the chairperson of Akron’s Relay For Life, said.

This year, the event took place on April 28 in the Athletics Field House from 3 pm until midnight. The Relay started with the Survivor Lap, where survivors of cancer and people currently affected by cancer walked the track along with their caregivers. Everyone in attendance joined them in this lap, indicating their support for people battling against cancer.

The teams that volunteered to raise funds set up campsites along the sides of the track in various themes such as Halloween, St. Paddy’s Day and Spongebob among others. They organized numerous fun games and sold a wide variety of food items to the participants to raise donations for the event. Majority of the teams were formed by various student houses. Students of Delta Zeta organized a game called Dunk a DZ, where one of their team members is dunked in water every time a participant fails to hit the target with a ball. Some student houses attracted participants with a wide variety of eatables like candied popcorn, rice crispy cakes and colorful candies.

There were also many teams that were formed by groups of friends or family members. One family set up a Halloween themed campsite and rented Halloween costumes to kids, adding more color and vigor to the event. Another team formed by a group of friends set up an Escape House for the participants. “Participants are supposed to find Zippy, who has been kidnapped. There are many clues that lead them to Zippy. We plan to donate all the money from this activity to American Cancer Society,” Nicole Baldy, one of the team members, said. Students from the Akron STEM High School also formed a team to organize some fun games.

Jimmy Johns and Chipotle also set up food stalls on the site. “We have marked down the prices of our items for the participants today. We plan to donate 10 percent of our earnings from this event to American Cancer Society,” Bethany Stuart from Jimmy Johns, said.

Akron Against Cancer’s goal mount for this year was $40,000. They had raised close to $35,000 prior to organizing Relay For Life and were hoping to raise more than $5,000 through this event to reach their target. “Our fundraiser events start in August. We do activities throughout the year to raise donations for the American Cancer Society. We organize gala events and golf outings throughout the year. Making Strides Against Breast Cancer is another important event we organize to honor survivors and to increase awareness,” Kayla Hillegass, who volunteers for American Cancer Society, said. “We also organized various fun events like Polar Plunge, where participants pay to take a jump into a lake. Dine and donate events are also part of our activities,” Elizabeth Tittle who volunteers for Akron Against Cancer, said.

The entire event was a lively affair. While teams took turns to walk the track, Zippy entertained children by walking with them as Rhythm and Roos, an a cappella group engaged participants with some famous numbers like Lean On Me, I Don’t Think About You and others. The event ended with the lighting of Luminarias to remember those we have lost to cancer, to celebrate those who survived cancer and to support those who are fighting cancer. The volunteers were recognized and appreciated for their hard work and support. Teams that raised the highest funds were honored with a “Gold Team” status and individual fundraisers were recognized. By the end of the event, Akron Against Cancer raised close to $44,000, all of which will be donated to the American Cancer Society.