Through her excitement, charm and dancing, Zippy showed no signs of her age during her birthday celebration in the Student Union. 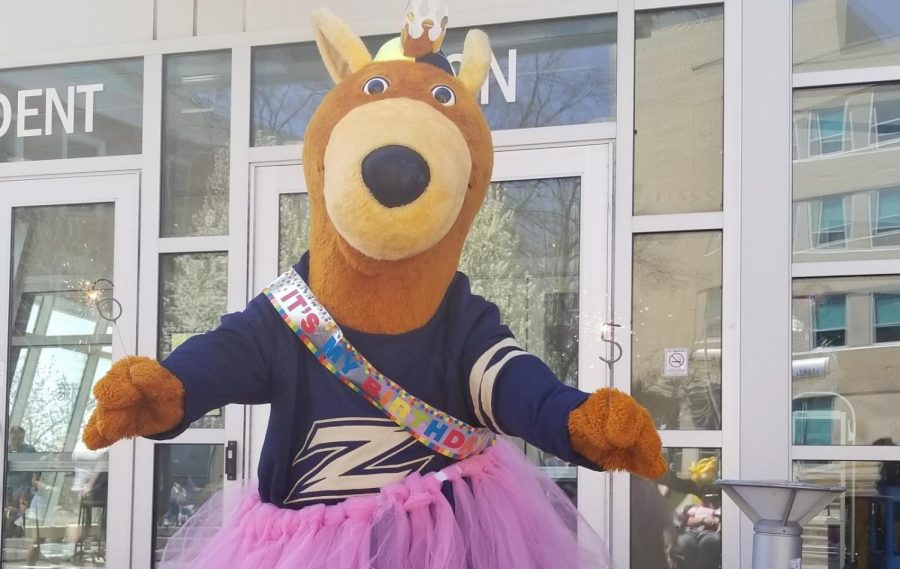 Zippy is one of the few female college mascots in the United States and was named the winner of the national Capital One Mascot of the Year Challenge in 2007.

Zippy, The University of Akron’s kangaroo mascot, celebrated turning 65 with students, faculty, staff and fellow mascots Webster from the Akron RubberDucks and Pozzie from Canton Charge.

During the celebration, students, faculty and staff could take pictures with Zippy and her friends, eat cupcakes and donate non-perishable food items for the Campus Cupboard.

The birthday celebration took place on May 1, 2018 in the Jean Hower Taber Student Union Trapezoid Lounge from noon to 1:15 p.m.

According to UA’s Athletics History & Traditions web page, Zippy became the University’s mascot on May 1,1953 — three years after UA athletes changed their nickname from the Zippers to the Zips.

Then, in the 1980s, she changed from a jumpsuit and paper-mâché outfit to a full kangaroo suit, a media advisory said.

The Alumni Association, with the help of the Athletics Department, Meghan Meeker with social media, and the University’s Communications & Marketing Department, had been planning Zippy’s Birthday Celebration since January 2018.

Kristi Reese, manager of executive events with UA’s Alumni Association and manager of the Zippy Program, said there were many goals behind celebrating Zippy’s birthday in the Student Union with the campus community.

“It was kind of a mixed goal,” Reese said. “It was part to celebrate senior week and part to help out the Campus Cupboard. We were thrilled with the turnout.”

Students, faculty and staff could drop off nonperishable food items any time during Zippy’s Birthday Celebration to receive a balloon and a chance to win prizes.

“I recently read something about how many college students go hungry,” Santiago said. “I thought that the pantry idea they came up with this year was awesome, so I wanted to contribute.”

Santiago said throwing Zippy a birthday party was important because she brings life to campus and smiles to people’s faces.

Many students who were walking through the Student Union stopped to celebrate Zippy’s birthday when they heard the music, saw people dancing and heard about balloon animals being handed out.

“I was walking down the Marketplace and I heard a bunch of music and somebody told me they were giving out balloon animals,” freshman Josh Villers, a Biochemistry major, said. Even as a college student, Villers said he still got excited about the balloon animals.

Others saw posts on social media about Zippy’s Birthday Celebration and grew interested in attending to show love and support for UA’s mascot.

Second-year student, Tayana Settles, said she saw a video about Zippy’s Birthday Celebration on Instagram and thought everything looked interesting. After arriving at the celebration and seeing the balloon animals, Settles said she was happy to attend.

Later on during Zippy’s Birthday Celebration, Interim President John Green made an appearance to wish UA’s mascot a happy birthday and to show support for the goals behind the celebration.

Overall, several students, faculty and staff expressed their love for Zippy and support for the Campus Cupboard through dancing, taking pictures, eating cupcakes and dropping off non-perishable food items.

To read more about Zippy’s history at The University of Akron, click here.