University of Akron to Eliminate 80 Degree Programs, Expand Efforts in Others

Board Chairman Joseph Gingo hopes that actions taken in result of the ‘Academic Program Review’ will help improve the future of UA while also decreasing costs. 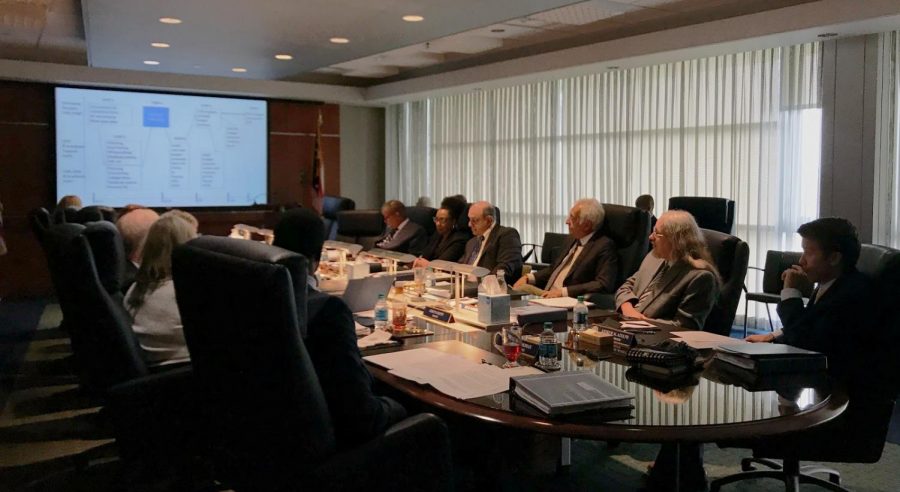 The University of Akron Board of Trustees reviews a chart presented by Interim President John Green during Wednesday’s meeting at the Taber Student Union.

By Brooklyn Dennison and Jake Herron

The University of Akron Board of Trustees adopted recommendations after a year-long “Academic Program Review” to phase out 80 underperforming academic programs and to expand 13 others during their regular meeting on Aug. 15, 2018.

The APR is a faculty-led exercise launched in fall 2017 which examined and identified the strengths and weaknesses of the University’s 414 degrees and degree tracks, according to an APR fact sheet.

Required by the Ohio Department of Higher Education Office for Graduation, the APR is used to improve UA’s ability to educate students for in-demand careers, enhance the future financial stability of UA and use state resources more effectively, the fact sheet said.

During the APR’s year-long exercise, UA found that 81 percent of the current academic programs offered are growing or have the potential for growth. However, programs that have had low enrollment or are duplicates of other heavily invested programs in the region will be phased out and terminated.

The decision also reflects a trend of declining enrollment overall in recent years at UA, leading to a drop in the number of students studying in certain areas.

The College of Health Professions’ BS in Athletic Training, one of the programs to be eliminated, saw one of the largest enrollment drops; with 140 students enrolled in 2015 to just 35 students this past year. Furthermore, the APR found that some degree programs have handed out only one or two degrees in the past three years.

Some other programs that will eventually be eliminated are Ph.D.’s in Nursing and History, MA degrees in Classroom Guidance and BA degrees in French and Interior Design.

See the full list of degree programs and concentrations to be eliminated.

During a press conference following the meeting, Interim President John Green said students who are currently enrolled in these programs have nothing to worry about as they will be able to finish their studies.

However, Green said if students have not chosen their major and are interested in one of the selected programs, they should contact their adviser to explore their options as new enrollment will soon be cut off.

“There are only just a few areas in the phase-out programs where there is intellectual activity, that we’re not going to do any more for good reason,” Green said.

The University anticipates having all of the programs identified by the APR for elimination to be phased out within three to five years, factoring in when all students currently enrolled in those programs obtain their degrees, among other things.

UA expects to save $5.6 million over the next three to five years as a result of these 80 programs being slashed. Board Chairman Joseph Gingo said that there will be no layoffs associated with this academic restructuring.

“Actions are being taken to extend the life of the University,” Gingo said.

While cuts were decided at the board meeting, plans were discussed to increase investments and efforts into other programs; such as cybersecurity, nursing, dance and communication.

According to an APR Q&A sheet, initial investments include hiring 31 full-time faculty and a contract professional in key areas; including music, health and biosciences, engineering and business, polymers and more.

UA plans to spend $2.8 million on new faculty and an additional $3.5 million in “startup costs” related to the initiative.

Members of the University recommend that students and parents contact their academic advisers if they have any further questions.

More information on the Academic Program Review can be found here.