Over 10,000 people showed support for the LGBTQ community during Akron’s second Pride Festival and March for Equality: which also happened to be my first. 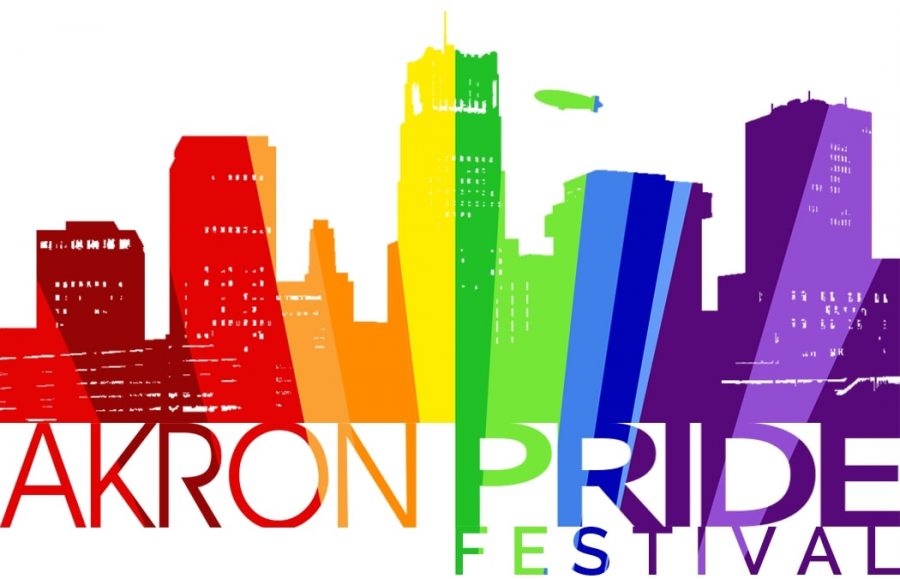 Organizers and volunteers couldn’t be more proud of how the 2018 Akron LGBTQ Pride Festival turned out, as more people attended and shared the experience together. (Graphic courtesy of the Akron Pride Festival)

Akron celebrated its second LGBTQ Pride Festival on Aug. 25, 2018, with the March for Equality from Highland Square to the activity-filled festival at Hardesty Park on West Market Street.

Gertrude Wilms, Chief City Prosecutor and LGBTQ Liaison to Akron Mayor Dan Horrigan said Akron’s first Pride Festival was able to happen due to support from both the city and the community.

Organizers expected about 500 people to participate in the first March for Equality and ended up with over 600 participants. As for the festival last year, between 8,000 and 10,000 people attended.

“I think that just by what we’re looking at today, we are either going to meet that or exceed it this year,” Wilms said.

Around 2,000 people participated in this year’s march with rainbow flags, colorful outfits, empowering chants and music. Some of the groups involved were Huntington Bank, PFLAG Akron, Flaggots Ohio, the Unitarian Universalist Church of Kent and the new QuTheatr.

The March for Equality officially kicked off Akron Pride at 11 a.m., starting at the Highland Square branch of the Akron-Summit County Public Library and ending 1.5 miles west at Hardesty Park.

Issac Báez, March Chair of the Akron Pride Festival, said he believes the march went well due to the increased number of participants from last year and hopes more people will continue to march in future years.

“I still get goosebumps from watching the video of the march and seeing the excitement of everyone at the festival. This is our second year and I know we will do even better for the next one,” Báez said.

Cleveland resident Ken Folsom, 45, has attended both of the Akron Pride Festivals with his husband and said the amount of support from the local politicians was a step toward progress and an amazing sight during Pride.

“There was a time in our history where marching in a pride parade and speaking would have been a death knell for a politician,” Folsom said. “It just shows how much things have changed over time and gives me hope for even more progress.”

The festival portion of Akron Pride ran from noon to 6 p.m. with two stages for entertainment, more than 140 art, business and non-profit vendors, the Pride Hero Kids Zone playground and an assortment of food trucks, carts and tents for refreshments.

An Elton John tribute, the APF Queens, Australian singer-songwriter Betty Who and more performed on the Main Stage while Visions of the Nile; a belly-dancing group, Flaggots Ohio and others performed in the vendors’ area.

Three survivors of the Orlando nightclub shooting; Javier Nava, Tiffany Johnson and Christopher Hansen, attended and spoke about issues/progress within the LGBTQ community with local politicians.

A new edition to this year’s Pride festival was the Orlando 49 Art Exhibition, comprised of drawn portraits of the 49 people who lost their lives on June 12, 2016, when a gunman attacked the popular gay nightclub, Pulse, in Orlando, Fla.

“I think it was an overall great event with a little for everyone. I loved the wide assortment of food trucks and entertainment that was available,” Folsom said.

In the future, both Báez and Wilms hope to see more organizations showing support for the LGBTQ community by participating in the March for Equality and the festival, as well as individuals within the community.

“I feel that it is important that our community continues to stand for all of those who still don’t feel safe to come out and that we want them to have that safe space here in Akron,” Báez said.

Marching for the First Time Ever

Out of those 2,000 people marching down the street, I had the opportunity to participate with a small group of my family and friends for the first of many LGBTQ Pride Festivals to come.

Earlier this summer, I attended Columbus’ Pride Festival and grew more disappointed in the lack of thought towards the disabled community with each second I spent looking for a ramp to the sidewalk or waiting to move past others.

This was not the case during Akron’s Pride Festival. The amount of evidence pointing to how well thought out this event had been, not only in terms of accessibility but also organization, was overwhelming.

Wilms said accessibility had been an important factor when planning pride because “we still wanted everyone to come in, experience it and enjoy it,” and that it would continue to be important for future prides.

Sometimes I feel certain events are not as consciously aware of things people with mobility issues need, based on the simple fact it isn’t a thought that routinely crosses their mind.

Nonetheless, several volunteers at the festival stopped me to ask how I was getting around and if I needed any type of assistance. Being noticed in a positive light and having help offered was refreshing for me.

“One thing that I think the LGBTQ community is good at is recognizing the needs of our less mobile community,” Folsom said.

Another reason why I feel Akron’s Pride was a more enjoyable experience is because there was something for everyone to either see or do in the park. Since Hardesty Park is open to the public, there were already playsets available for children, making the event family-friendly.

One last reason I found Akron Pride to be an amazing experience was the large variety of local vendors that set up tents in the park. Not only was I able to see new and intriguing items, but also I gained the opportunity to support small businesses in the Akron area.

For a while now, I have been struggling to find a business that sold my Pride flag at a reasonable price. While in the vendors area of the festival, I bought my first large Pride flag for $20 and wore it for the remainder of my day.

Overall, my first experience marching in any Pride and my second time attending a Pride festival is now a memory that I will love and cherish for the rest of my life. As for future Pride events in Akron, I plan on continuing to march for equality, visibility and strength.

And although Akron is smaller than Cleveland or Columbus, I feel both cities could take a page out of Akron’s book in terms of planning future Pride events to be more accommodating and accessible.