Several people within the History Department share their thoughts and opinions regarding recent actions taken by UA. 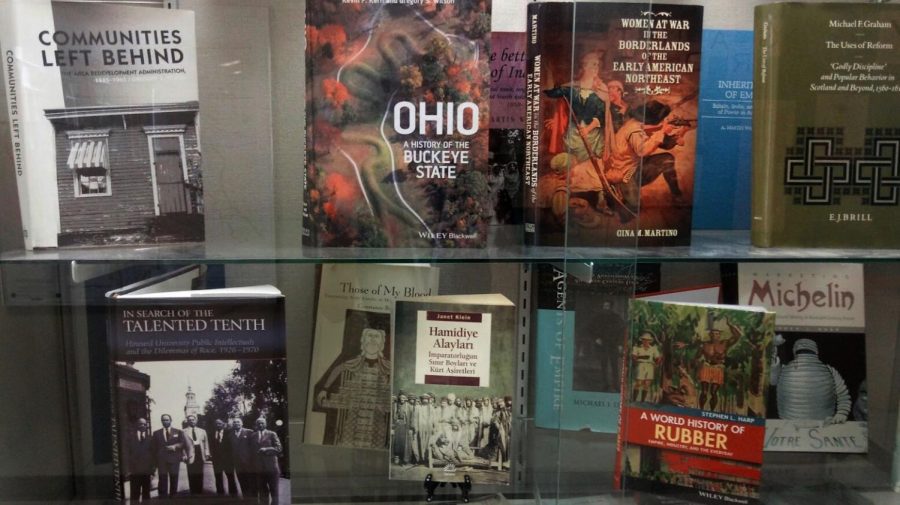 Various books written by UA History professors on display on the second floor of the Buchtel College of Arts and Sciences.

Students and faculty members from The University of Akron’s History department, which was subject to recent program cuts, show disapproval of the Board of Trustees’ decision.

Using recommendations from an academic program review, UA plans to phase out 80 underperforming degrees after the board of trustees meeting on Aug. 15. Along with History, some other departments that faced cuts were Physics, Math and Sociology.

Deniz Demir, a graduate student in the History Department, said the humanities and social sciences have been greatly affected by the cuts and eliminating parts of those programs is anti-intellectual.

“They are sacrificing humanities and social sciences like it’s a side thing and not the foundation for a good education,” Demir said.

The History doctoral program is one of the degrees being phased out, which affects students like Demir; who said he is now unsure of things like his graduate funding.

“They did not include the faculty or graduate students in their decision, which is undemocratic,” Demir said.

Others’ share the opinion that the University lacks democracy.

When asked to comment on the recent program cuts, Distinguished Professor of History Walter Hixson wrote: “The University makes a mockery of shared governance. The Provost has very little real support on campus yet functions as a virtual dictator with the acquiescence of the interim president. The BOT is comprised of political appointees with little real knowledge of how the university works day to day.”

Hixson, along with several other UA faculty members, has written to the Akron Beacon Journal about their dissatisfaction in the degree cuts.

Not only are people upset with the academic eliminations, they do not agree with what the University has chosen to do with its funding.

One day after the Board of Trustees decided to phase-out nearly 20 percent of its academic programs, UA announced that the largest area of dedicated space any university has for esports will be opened in 2018.

Another History graduate student, Suraj Lakshminarasimhan, said that he didn’t like how UA is trading academics for video games.

This was also a concern to John T. McNay, the President of the American Association of University Professors, who wrote a letter to Interim President John Green and the Board of Trustees.

According to the Akron Beacon Journal, McNay wrote to the University, “it is as though you are saying: Well, we are bored with education so let’s play games instead.”

McNay also critiques UA for phasing out programs instead of trying to promote them.

History student Tony Pankuch said the board it trying to justify cuts because of low enrollment numbers but they are not considering what factors might be leading students to avoid those programs in the first place.

“I had decided not to pursue my MA in History at UA long before these changes were announced, but I didn’t make that decision based on disinterest in the program. I made it due to limited course selection and lack of funding for student assistantships,” Pankuch said.

Pankuch said not trying to revive these integral programs before cutting them is a massive disservice to a talented and passionate faculty and student base.

Pankuch said that he feels that the University is painting itself into a corner by investing heavily in very specialized programs and extracurriculars at the expense of departments that are staples of most other liberal arts colleges.

Only time will tell whether the University will benefit from the program eliminations, but according to the history students and faculty that were interviewed, the cuts are be doing more harm than good.