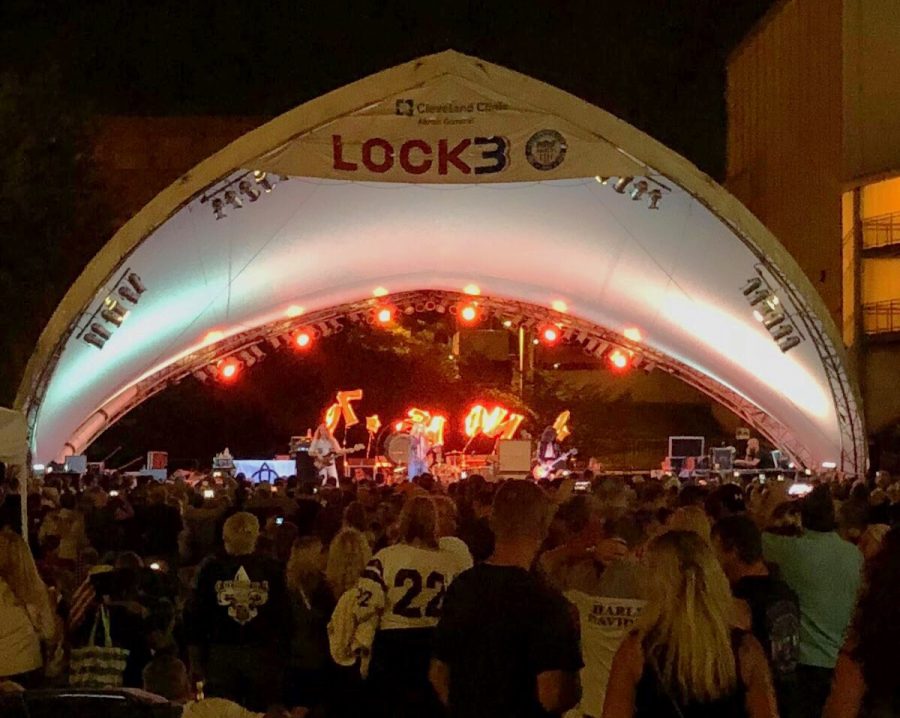 An audience gathers to watch Zoso, The Ultimate Led Zeppelin Experience, at Lock 3 in Akron, Ohio.

According to WONE 97.5’s website, “Rock the Lock” is a part of Give Back Fridays, where the community hosts fundraisers during the day to support local charities. Admission was $5 at the door and all proceeds went to the charities.

Food and drinks were also available with part of the proceeds going to charities. Charities for the 2018 Give Back Fridays have yet to be announced.

These programs include Project Grad, a program serving at-risk students in Akron; Cascade Community Development, a company helping local veterans; Students with a Goal, which mentors students in the Summit Lake area; and the One In Six Foundation, which is an organization researching prostate cancer.

Outside Voices took to the stage first as an opening band for Zoso. Outside Voices has two albums out, “Hound Dogs” in 2017 and their 4 song recording of “Big, Big EP” came out in 2018.

Outside Voices has a touch of everything that people love: grunge, pop, rock, and even some throwback psychedelic sounds of the 70’s. For further information, check out their website.

Zoso took the stage following Outside Voices, setting up their instruments to an acoustical track before going straight into “Rock N Roll” by Led Zeppelin.

According to their website, Zoso tries hard to give audiences a close experience to what a real Led Zeppelin concert would look and feel like by each of the members portraying a certain member of the band.

The band performs in all the outfits based on the original Led Zeppelin Band, including ties around their waist and period-typical punk rock teased up hair.

Zoso was formed in 1995 and has toured the world for the past 18 years, giving audiences the opportunity to experience a Zeppelin concert as if it were frozen in time.