After 10 years of research, travel and image searches, Gina Martino felt relieved and excited knowing her hard work paid off. 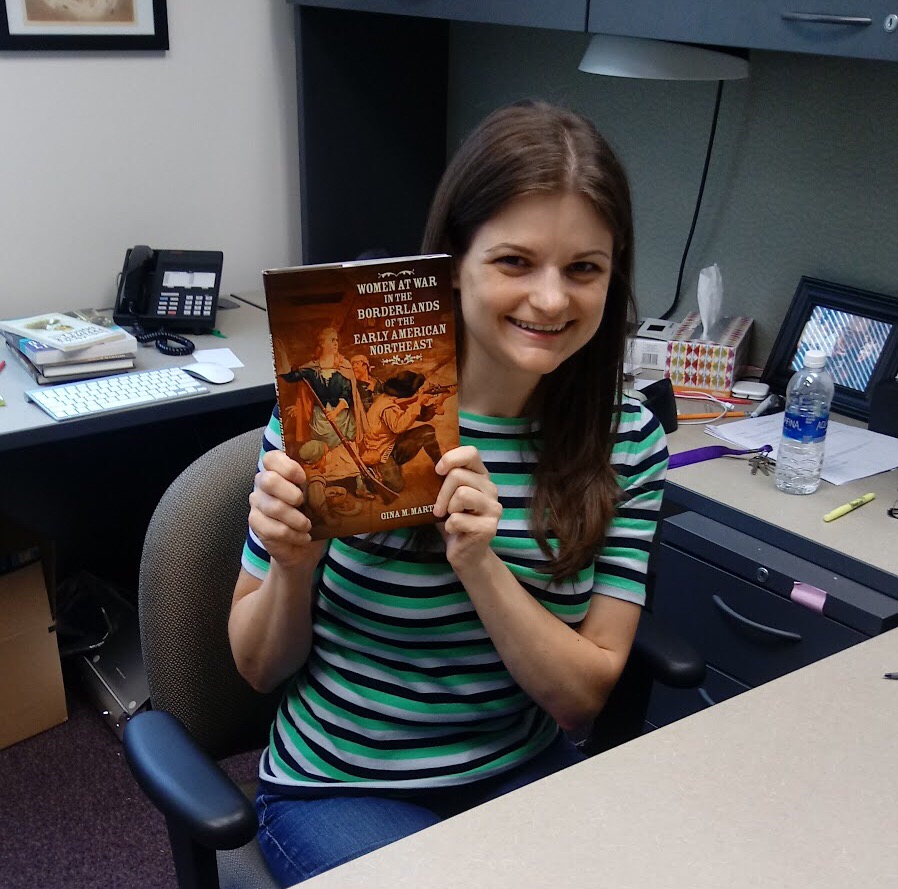 Dr. Martino with her book, "Women at War in the Borderlands of the Early American Northeast," in her office in the Buchtel College of Arts and Sciences.

An assistant professor of history at The University of Akron published her first book, “Women at War in the Borderlands of the Early American Northeast,” which demonstrates how women participating in warfare was integral to gender ideologies in colonial America.

Gina Martino, the author of the book, said she started her research because she was interested in violent women in Early America who were praised for their acts instead of being reprimanded.

One story that piqued her interest on the topic was about an Algonquian woman who was taken captive by a group of Iroquois.

When the woman had the chance to escape, Martino said, “Instead of just taking off, she grabbed a hatchet and brained one of the men.” She said the Jesuit priest who heard about the incident and published an account of it, saw her as respectable.

Martino said she spent 10 years working on the book. Throughout those 10 years, she seemed to have had many adventures.

Some of her research, Martino said, included driving through the Midwest to reach archives and libraries, getting lost in New Hampshire looking for Mount Weetamoo and searching through nearly 100,000 images for her book’s cover.

Martino chose her book cover, an illustration by Canadian artist J.D. Kelly, because she wanted to convey an image that women were active in defending their country and knew what was going on, she said

“Women knew their way around guns. If they were not wielding them, they were a part of ammunition support,” Martino said.

Although the thought of Early American women’s martial activities may seem surprising to some, Martino said that it actually makes sense because they were defending their country and upholding the patriarchy. It was a conservative act, rather than a protofeminist one, she said.

Martino explained that these women were only punished for violent acts if they did something treasonous such as kill one of their own people or if they were held captive and didn’t want to escape.

After a decade of work, Martino said she was relieved and excited that her book was finished. She also said she was glad to find an interesting topic that she could research for 10 years.

“History should be fun. Women’s role in society is intellectually nutritious but also fun to read,” she said.

Along with being a history professor at The University of Akron since 2013, Martino is also involved with the women’s studies program, which often reflects in her work.

Martino received her doctorate in Early American history from the University of Minnesota after graduating with a bachelor’s in history and music from St. Olaf College and a master’s in early modern European history.

Martino said she hopes her research on American women encourages other scholars to look for instances of women throughout history being active.