Professor of Law to Speak on Relationship Between Humor, the Law

In hopes of helping students understand how the U.S. legal system and humor influence one another, Professor Laura Little will be discussing ways those two concepts co-exist and how to use them efficiently together. 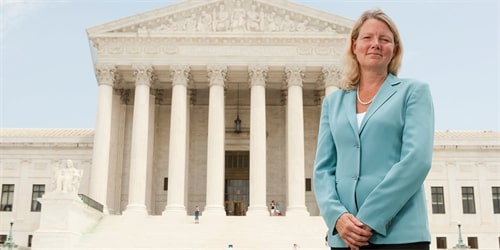 Professor of Law Laura Little from Temple University will be holding a lecture called “Humor and the Law” on Thursday, Sept. 13, from 12:15-1:15 p.m. in the  McDowell Law Center Brennan Courtroom 180.

The subject of how humor should influence and interact with the law has been a challenge in United States courts for several years, including the way presidents have been criticized for their sense of humor.

Through the use of cartoons, pictures and video clips, Little will provide examples of humor regarding the law and how humor works within the law, according to a UA press release.

“Providing an easily understood overview of four areas of law… Little shows how the law seeks to muzzle some types of humor while protecting and encouraging other types,” the press release said.

Little will also be presenting material from her upcoming book, “Guilty Pleasures: Comedy and Law in America,” which will be published on Nov. 12, by Oxford University Press.

“Her forthcoming book on humor and the law is already receiving significant national attention as well,” said Matthew Wilson, Professor of Law and Former UA President.

Before teaching Constitutional Law, Professor Little said she focused on freedom of speech during her early legal career. During her time as a law clerk for the Supreme Court, several cases’ defense had been ‘it was just a joke’.

“I have always been fascinated by what makes things funny,” Little said. “These parts of my background led me to this topic, which has now become my ‘guilty pleasure.’”

The lecture will be a unique and intriguing way for UA students to gain knowledge about how humor and the U.S. legal system interact with one another and ultimately influence one another.

“It will provide exposure to an entertaining side of the law, insights into the interaction of humor and the law, and may even provide a glimpse into why our society enjoys lawyer jokes so much,” Wilson said.

Professor Tracy Thomas, the Seiberling Chair of Constitutional Law at UA, said students should attend the lecture because it’s important to know how the law operates within daily life since it “provides our social norms of expression, including humor…”

An example of how humor and the law influence one another can be shown by how the president and late-night television hosts influence each other’s actions.

Wilson has had multiple instances in the classroom where he needed to discuss how humor and the law interact with one another: such as the legality of humor in parodies and spoofs and whether humor is protected by the first amendment.

“There are only a few scholars in the country that have seriously looked at humor and the law,” Wilson said. “Thursday is a prime time to take advantage of this expertise and entertainment.”