Caldwell comes up big for UA in double OT 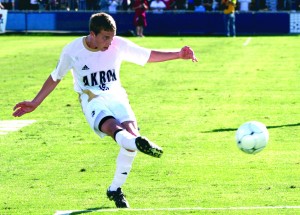 Junior midfielder Scott Caldwell scored the Zips’ game-winning goal in the 106thmminute, lifting the No. 2 University of Akron men’s soccer team to a 2-1 double overtime victory against Cal State Northridge (1-2-0) this past Saturday night at Matador Soccer Field in the Cal State Northridge Labor Day Classic.

Freshman defender DeAndreYedlin was credited with the assist on the play as Caldwell received the pass from the right side of the field, playing it off his chest and then firing it past Northridge goalkeeper Michael Abalos. The goal by Caldwell was his second of the season.

The Zips (2-0-1) held a 1-0 lead with less then 10 minutes left in the game until Northridge’s Yarden Azulay scored in the 82nd minute, forcing the game into overtime.

It was the only shot on goal for the Matadors in the game in which Akron out-shot them 24-8 overall and 14-1 on frame.

“Credit to Northridge; they fought hard and didn’t die,” said UA Head Coach Caleb Porter, who won his 92nd career match Saturday. “But I thought our guys dug deep as well. We’re a young group and there are a lot of guys still struggling to find themselves. Our overall personality of the team is still taking shape. But we made good progress tonight. I was proud of them for finding a way to win the game.”

The first goal of the game came from sophomore forward Darren Mattocks in the 25th minute when Caldwell found Mattocks, who shot the ball just inside the right post for his third goal of the season.

Throughout the second half, the Zips created a number of scoring chances – out-shooting Northridge, 10-3 – but were unable to find a second goal. UA was especially aggressive late in the game, but Abalos was able to record four saves during a 10-minute run.

The game against Northridge began with a similar physical style of play as Thursday’s draw with Cal State Fullerton, as CSUN was called for seven fouls and drew three yellow cards in the first 13 minutes of the match.

Thursday’s match, which resulted in UA’s first draw of the season (0-0) was a physical game, with a total of 35 fouls in the game, 28 of those coming from Cal State Fullerton.

Akron, who had a 10-2 advantage in shots including a 6-1 margin on frame in the first half, was unable to get anything going as Cal State Fullerton gave the Zips a hard, physical game and no chance of scoring in the opening match of the Cal State Northridge Labor Day Classic at Matador Soccer Field.

“We’re not going to make excuses; we didn’t play our best game today,” Porter said. “But clearly, Fullerton’s game plan was to chop the game up with fouls and be physical and not allow us to get into a rhythm.”

The goalkeepers for both teams had good outings as Akron’s junior goalkeeper David Meves posted four saves in the game, with two of them coming in the second overtime of the match. Cal State Fullerton’s goalkeeper Trevor Whiddon had a total of nine saves out of the team’s 10.

The only team save of the game for Cal State Fullerton was the Zips’ best opportunity to score; however, a Fullerton defender cleared the ball off the line in the 29th minute. Following a Zips’ free kick from 40 yards out, junior Tommy Schmitt, who earned his first career start, gained control on the left side near the touch line and served the ball into the box. Caldwell, who finished with a career-high seven shots, was there to receive it and headed it towards an open net, only to be denied.

The rest of the game was fairly even with both teams earning chances to score, but neither were successful due in part to the large number of stoppages. For the game, the Zips out-shot the Titans 20-14 overall and 10-4 on frame.

“We could be disappointed with the way the game was officiated, but the bottom line is we didn’t handle [the physical play] very well. To me, we looked like a young team that wasn’t ready to deal with a physical team that came to play. Fullerton wanted to rattle us and, in some ways, it worked. We have to do better next time,” Porter said.

On a side note, Caldwell, Mattocks and Meves were each named to the Cal State Northridge Labor Day Classic All-Tournament Team.

Meves has allowed just one goal in more than 305 minutes of play for a goals-against average of 0.29.

The Zips have been defeated just once in their last 27 regular season road matches for a 24-1-4 record.

UA improved 60-0-0 when leading at halftime under Porter.