Editorial: UA Board of Trustees Making Decisions Based on Their Own Interests, Not the Students’

Through a lack of shared governance, undesired cuts and confusing initiatives, the administration fails to meet the needs of its campus community. 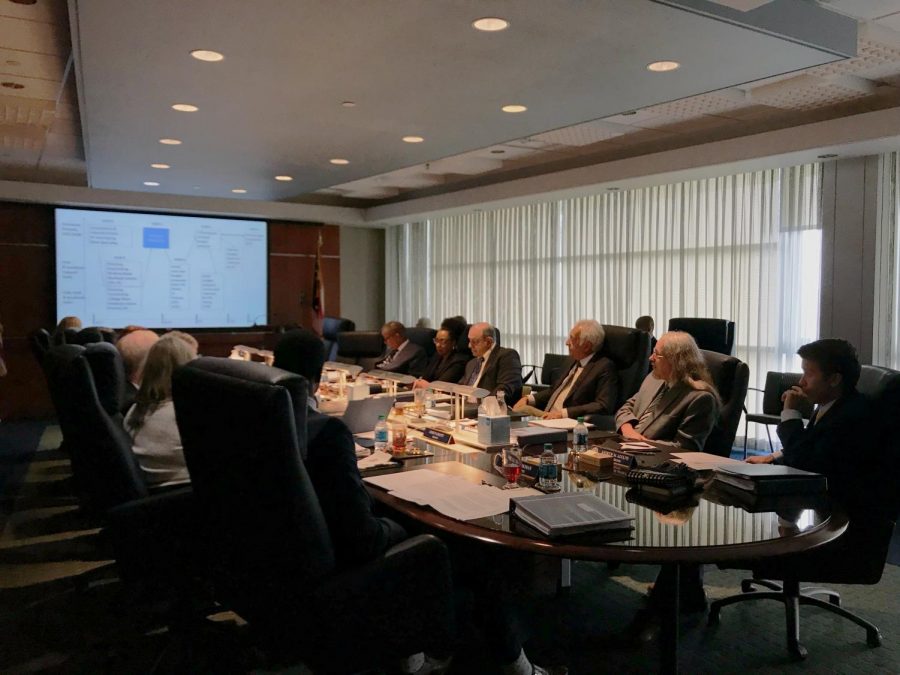 The University of Akron Board of Trustees reviews a chart presented by Interim President John Green during their Aug. 15, 2018 meeting.

By The Buchtelite Editorial Board

The Board of Trustees is not making decisions based on the interests of the students and faculty, but instead on trends that will ultimately destroy the credibility of The University of Akron.

On Aug. 15, the board decided to phase out 80 “underperforming” academic programs, which were taken from recommendations of an academic program review. The APR was said to have been a faculty-led exercise used to improve UA’s ability to educate students for in-demand careers.

However, the cuts made were undesirable and perceived as unwarranted by both students and faculty.

Some of the departments that faced cuts were math, physics, sociology and history. Academic programs in these fields are staples at any other credible university.

This leads many to question whether UA is a credible university or on its way to being an overpriced community college.

Over the past year, the University has made numerous decisions, such as the implementation of Esports and Five-Star Fridays, that come across as gimmicks to increase enrollment: but nothing has affected the students’ education quite like this.

Being innovative as a university is one thing, but being trendy is another. One is respected while one crosses the line of being a laughing stock. UA is becoming the latter.

Most students do not attend UA because it was their first choice. They attend this school because it is close to home, affordable, and gives out degrees that have value.

Taking away foundations of education and investing in trends is a disservice to not just the students, but the community as well. A poverty-stricken child from Akron could dream of getting a doctorate in history or biomedical engineering, but because of recent decisions at UA, they have to work harder to take that dream elsewhere or watch it crumble.

The administration is denying the community of a positive and constructive future by eliminating important fields. Students from the biomedical engineering department are constantly in the media, creating equipment that allows the community to thrive.

Just this July, students from the department created a fishing pole to allow a boy with cerebral palsy to enjoy the sport. This shows just one instance, but it alludes well to the contributions that the department has made. The administration is trading this so a group of students can play video games.

Although not all academic programs are being eliminated within cut departments, the departments could face a massive amount of professors, who have dedicated their lives to the field, leave.

Many of the programs being cut are Master’s programs, which give professors the ability to do research and teach future academics. Distinguished history professors are not going to stay at the University to teach basic undergraduate classes. That is disrespectful to hardworking faculty members and students who hope to work with said faculty members. This also means that the University will lose well-respected academics who enhance the learning power of their departments.

It is understandable that the administration has to make tough choices that some will ultimately not like, however, the biggest insult to the campus community was that the administration claimed the APR was a faculty-led exercise when it appears that it wasn’t. According to the Akron Beacon Journal, the Faculty Senate was part of the APR, but did not have “a chance to weigh in on the final list of recommendations of programs to be phased out.”

This denotes that the faculty did not actually have a say in the cuts that were made; if they did have a say, they were disregarded.

The board may have received warnings from the faculty that some cuts were a bad idea, but they failed to listen.

The final list of programs to be phased out was created by Interim President John Green and Provost Rex Ramsier. Ramsier is known to be extremely unpopular among faculty members. Because of this and the lack of being attentive to the wants and needs of faculty, many question the genuineness of shared governance at the University.

In an ABJ letter to the editor, Walter Hixson claims that the cuts to history and sociology are strike backs to departments that have been instrumental to the faculty union and are well known for their analysis of institutional power.

This appears to be a fair analysis since the board seems to be more loyal to their own right-winged agenda than the University they are supposed to be supporting.

The members of the board are appointed by the governor, which is currently Republican John Kasich. When the Ohio gubernatorial elections strike in November, the Republicans may lose to Democrat Richard Cordray.

This could mean new appointees to the board. Perhaps the current board is trying to do as much as they possibly can before they are replaced, even if it is at the demise of the students and faculty.

The end result of what the board wants is not clear. It may be to make the University more marketable or to genuinely save money. Whatever the reason, it is clear that the University is in shambles, and the students are the ones who will have to pay for it.