While some say the idea of gaming to help pay tuition is great, others believe the downsizing of programs and increase in Esports is harmful. 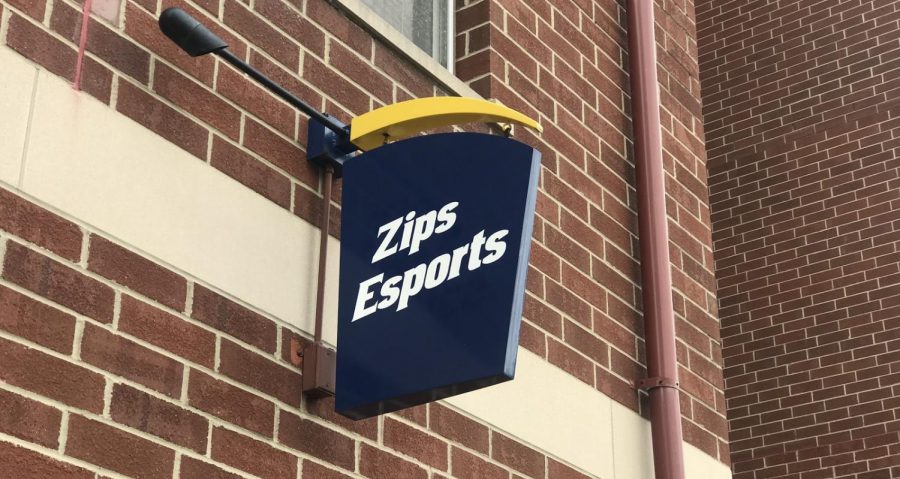 A sign marks the location of the Esports venue at Williams Honors College. This spot was originally a Zip Card Office branch

Getting part of your college tuition paid for by smashing buttons on a controller and winning online video game competitions is not something that most college students would have ever thought could be possible. Now, at The University of Akron, it is possible.

“The idea of Akron saying ‘hey, here’s your gamer jersey and we’re going to give you money, so you can come to college here’…it’s insane to me” Matt Speidel, a UA student, said. “I was just so excited because gaming is such a big part of my life that the fact that the University will be doing it full time and as an actual sport is amazing to me.”

Alexander Ickes, UA student, said, “I would 100 percent be happy with it just being a club, but having it be like an actual varsity sport too is really cool.”

So, what is Esports? A research paper published in 2016 by Emerald Publishing Limited explains Esports as “competitive video gaming that is often coordinated by different leagues, ladders and tournaments, and where players customarily belong to teams or other ‘sporting’ organizations which are sponsored by various business organizations.”

Esports is a rapidly growing industry. According to the 2018 Global Esports Market Report, the global esports economy will grow to $905.6 million this year. On its current path, it is estimated that esports, as an industry, will hit $1.4 billion by the year 2020.

Three separate locations on campus are dedicated for both the varsity and club esports teams to use.

While students at UA and beyond are excited about Esports introduction, there are others who do not necessarily agree with the funding that the program is receiving. This could be due to the fact that UA recently announced it would be cutting 80 academic programs, while also investing $750,000 in renovations for the new Esports facilities.

People have been commenting online about the recent news. On Twitter, user P.J. O’Cobhthaigh tweeted “Phasing out Ph.D.’s for esports doesn’t seem to be a great plan…”.

In an article from cleveland.com from about the recent announcements, users commented “good lord, this is embarrassing” and “…they are running at a $16 million deficit but $1 million is no problem for Esports?”

The renovations are expected to be completed by October, officially getting the program underway.