Former Cincinnati mayor and talk show host considers the 2018 election to be a ‘test of patriotism.’ 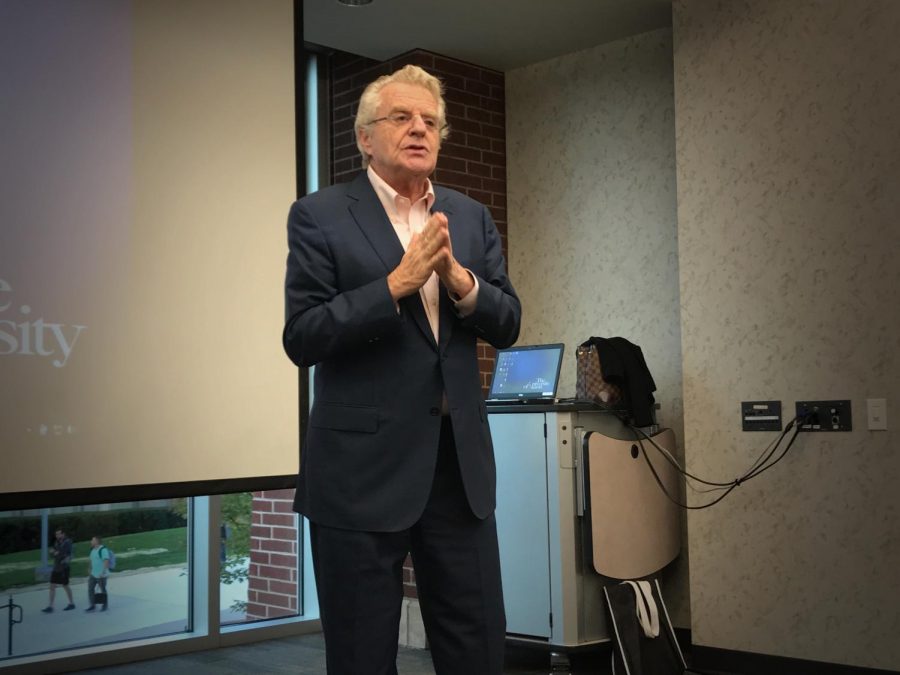 Television star and former Cincinnati mayor Jerry Springer was the guest of honor at a meeting of the College Democrats of The University of Akron on Wednesday, Sept. 26 at the Taber Student Union.

Dozens of students, community members and fans attended the event to hear Springer discuss the current political climate in the U.S., as well as the upcoming election.

Springer opened by describing what makes America different from every other country in the world: the fact that the U.S. is the only nation created from an idea, while others in history originated from tribes, religions and more.

“We’re unique because of our ideas.”

“We’re unique because of our ideas,” Springer said.

Springer, a Democrat, told audience members that the very idea America was founded on is now being threatened by those currently in Office, namely Donald Trump.

Calling out the President, Springer provided examples of actions taken during his administration; including the Executive Order temporarily banning immigration from predominantly-Muslim countries and the construction of a wall along the southern border.

Springer referred to Trump’s party as the “resistance party,” a political jab often used by Republicans towards Democrats.

Springer said it is the Republicans who are resisting American values by promoting ideals that disadvantage the poor, women, immigrants, minorities and individuals with disabilities.

“We are a multicultural society; we believe everybody should have a shot,” Springer said.

Citing recent controversies involving Trump’s presidency, Springer said jokingly that instead of the White House, Trump belongs on his talk show where guests from all walks of life engage in heated and racy conflicts.

Speaking with students during the discussion, Springer also weighed in on current events unfolding in Washington D.C., including the repeated attacks on the press by Trump and the controversy surrounding the nomination process of Judge Brett Kavanaugh to the U.S. Supreme Court.

Given the current political climate, Springer urged his audience to participate in the 2018 election, calling it a “test of patriotism.”

“If the Democrats don’t win this time, [Trump’s] got free reign,” Springer said, fearing that a Republican-controlled Congress would see a victory in 2018 as a call to justify Trump’s actions in order to please their right-wing constituents.

Following the discussion, Springer answered questions from the audience and members of College Democrats. He also stayed to chat with fans, take photos and sign autographs.

Springer, 74, was born in the United Kingdom during the height of World War II. His family immigrated to the United States when he was five years old to escape the fate that his Jewish ancestors faced in war-ravaged Europe during the Holocaust.

His first foray into American politics was during the civil rights movement.

“I grew up as an anti-war protester; I was a long-haired hippie,” Springer said.

He went on to serve five terms on the Cincinnati City Council in the early 1970s and was elected mayor in 1977, serving two terms as one of the nation’s youngest mayors at the time.

Following his time in office, Springer was hired to anchor the news program for local NBC affiliate WLWT, which was last in ratings at the time. The presence of the former mayor of Cincinnati on the evening news proved to be successful in turning the station around, Springer said.

In 1991, Springer was approached by network executives from NBC and was assigned a timeslot to host a new talk show titled, The Jerry Springer Show. The show’s format features Springer as he presides over guests engaging in salacious quarrels that often lead to hair-pulling and chair-throwing as a studio audience cheers on and infamously chants his name.

The raunchy action proved to be a hit among viewers and the show became nationally syndicated, making Jerry Springer a household name. Springer estimated Wednesday that he has taped over 5,000 episodes of the show.

With another television star now in the White House, many have called on Springer to once again run for public office. Springer dismissed the suggestion on Wednesday.