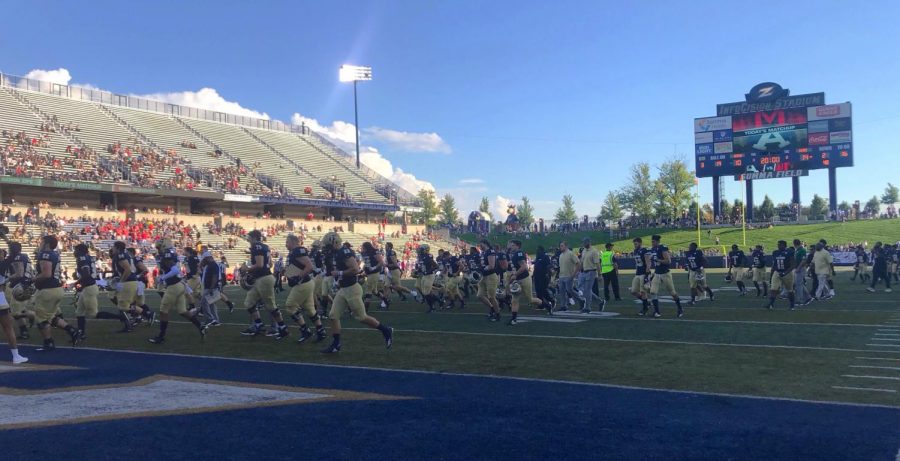 The Zips exit the field as the weekend's homecoming festivities take place during halftime.

The game was the start of official Mid-American Conference play for the Zips, which means the Zips will be competing against those within their same conference for the rest of the season.

“There’s not much you can say, we just got whipped and when things started to snowball it just got rolling,” Akron head coach Terry Bowden said on GoZips.com.  “Everything that could have gone wrong, went wrong.  We couldn’t get anything to go our way, and we didn’t respond to it as well as we should.”

According to the postgame notes, the loss ruined the at home winning streak that the team had going for five games.

A highlight for the Zips came before the game even started when senior linebacker Ulysees Gilbert III (Ocala, Fla.) became the recipient of the Jim and Sue Dennison Scholarship. This scholarship is for student-athletes who embody ideals such as tenacity, determination, and commitment to excellence.

After a scoreless first quarter, Miami consecutively scored 14 points to pull ahead of the Zips.

The Zips didn’t complete any scoring plays until under five minutes in the second quarter when Sophomore wide-receiver Nate Stewart (Bethlehem, Pa.) caught a 17-yard pass for the first touchdown of his career with the Zips.

On Miami’s next play, Alvin Davis, Jr. (Fort Lauderdale, Fla.) caught his fourth interception of the season for the Zips. This lead to a 40-yard field goal with 0:50 to go in the first half.

After halftime, Akron forced a fumble and returned it for a 46-yard touchdown, pulling the Zips ahead for the first time in the game.

However, Miami quickly responded and scored 27 points in the third quarter. Miami forced five turnovers overall, throughout the game and 422 offense yards to Akron’s 259.

Zips Football continues on to Buffalo on Saturday, Oct. 13. This game will be televised on CBS Sports Network.