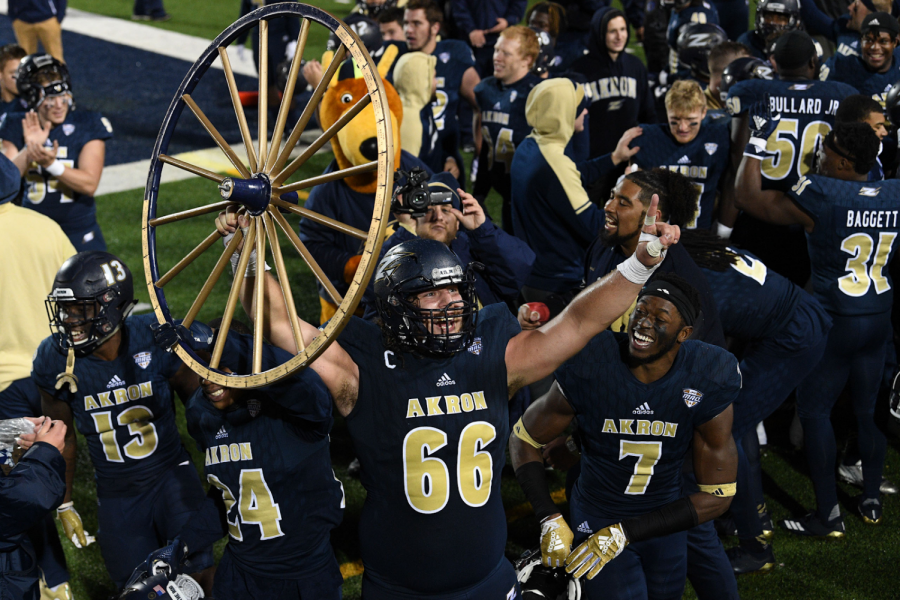 Zips football players and Zippy celebrating with the Wagon Wheel after fourth consecutive win against Kent State. (Photo courtesy of the Akron Zips)

The game went into overtime, where the Zips secured a 24-23 win through an extra-point conversion.

This is Akron’s ninth overtime game in program history and the first since 2012, according to the post-game notes.

According to Kentstatesports.com, in 11 of the last 13 meetings, the team that has scored last has won.

UA sophomore quarterback Kato Nelson (Hollywood, Fla.) made a successful pass to sophomore receiver Andre Williams (Orlando, Fla.) for the game-winning touchdown from the eight-yard line to give the Zips a 24-17 lead.

After senior defensive end Jamal Davis II (Canton, Ohio) tackled Justin Rankin for a four-yard loss on the opening play of overtime for Kent State, the Golden Flashes scored a 29-yard touchdown pass to take the score to 24-23.

Akron posted 362 yards in total offense, including 219 passing yards. Kent State had 371 yards for the game.

This win marks the fourth consecutive against Kent State win for the Zips, the second longest streak in the history of the rivalry according to GoZips.com; meaning that the UA senior class have never lost a Wagon Wheel game.

The win also marks the first in Mid-American Conference play for the season, as stated in post-game notes.

The game is a Hometown Heroes recognition game and anyone with a military, police, firefighter or paramedic I.D. will get in free to the game. Trunk-or-Treat will also be happening in the parking lot before the game.