LGBTQ-Friendly Statewide Candidates to Vote for

As the Trump Administration continues to rollback LGBTQ rights, it’s time to vote in people who care 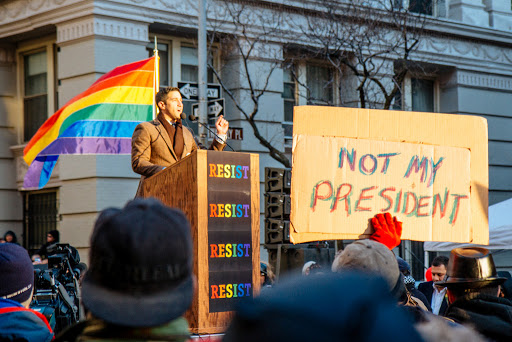 LGBT Solidarity Rally in front of the Stonewall Inn in solidarity with every immigrant, asylum seeker, refugee and every person impacted by Donald Trump's illegal, immoral, unconstitutional and un-American executive orders. (Image via Flickr)

Despite thanking the LGBTQ community and ensuring their safety in a 2016 tweet, President Donald Trump and his administration have done nothing but rollback LGBTQ rights that took decades to establish.

Some of these rollbacks, according to The Leadership Conference, include barring trans-individuals from entering the military and unclear statements about allowing funds to schools that discriminate against LGBTQ students.

One of the most recent events is a proposal to legally change the definition of “sex” that will omit trans people from discrimination, aNew York Times article explains.

Although, citizens may not immediately be able to do much about the atrocities made against LGBTQ rights, one thing they can do is vote for LGBTQ-friendly candidates this mid-term election.

Citizens of Ohio; which is a state that does not have nondiscrimination laws for LGBTQ people, can work to secure queer rights on a state-level by voting in candidates that care about civil rights.

Here is a list of LGBTQ-friendly statewide candidates, in alphabetical order by last name, that you can vote for:

Editor’s note: the only candidates listed are from the two major parties. Although there are candidates from other parties, records on their stance on LGBTQ issues is not clear.

Kathleen Clyde: According to Equality Ohio, Clyde has co-sponsored each General Assembly’s version of the Ohio Fairness Act and included LGBTQ individuals in Ohio’s hate crime laws. She also has the endorsement of the Human Right Campaign.

Richard Cordray: According to PRIZM, an Ohio LGBTQ magazine, Cordray said he advocates for LGBTQ equality. He stated in a PRIZM questionnaire that he supports the Ohio Fairness Act that protects LGBTQ people from discrimination, supports nondiscrimination laws against gender identity, would like to allow trans people to correct their gender on their birth certificates and does not support conversion therapy.  He also has the endorsement of the Human Right Campaign.

Steve Dettelbach: Dettelbach defended civil rights as a federal prosecutor and has had a history of supporting LGBTQ rights. According to Cleveland.com, in 2013, he spoke at a rally supporting the strike-down of the Defense of Marriage Act and in 2018, he said Ohio hate crime laws should be expanded to include those motivated by gender and sexual orientation. Dettelbach is endorsed by the Human Rights Campaign.

Frank LaRose: LaRose was a sponsor of the Equal Housing and Employment Act in 2014. He also participated in a Republican event focused on LGBTQ equality in 2016 called “Bathrooms and Beyond”, according to Equality Ohio.

Betty Sutton: According to a Questionnaire by the Columbus Dispatch, Sutton supports same-sex marriage, including sexual orientations and gender identity in nondiscrimination laws, and thinks that trans students should be able to use the bathroom that matches their gender identity. She is endorsed by the Humans Rights Campaign.