Baristas and customers share their experiences with and feelings towards the recent seasonal change in stores. 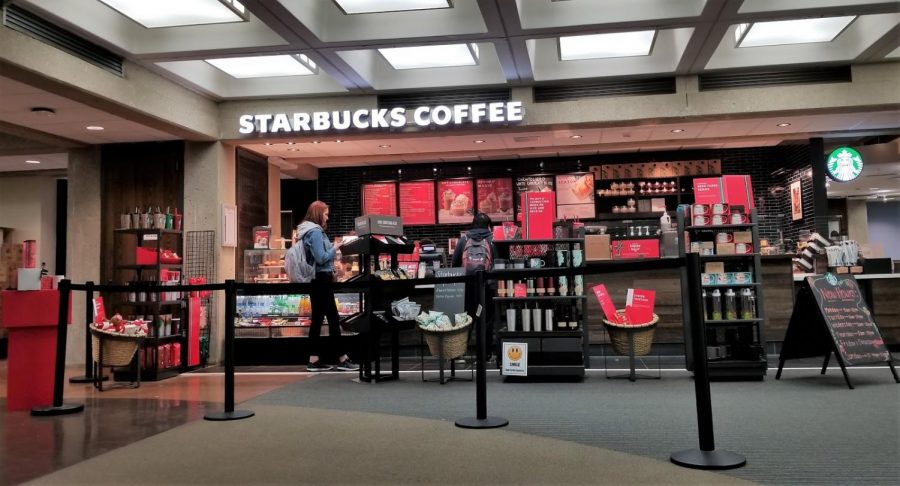 The Starbucks in the Bierce Library is filled with various red decorations and holiday themed merchandise.

In 1971, the first Starbucks store opened in the Pike Place Market of Seattle and 11 years later, Howard Schultz, the current chairman emeritus, joined as the Director of Retail Operations and Marketing.

After traveling to Italy in 1983 and learning of the popular espresso bar, Schultz convinced the original founders to experiment with the coffeehouse idea and the first Starbucks Caffè Latte was served, according to a Starbucks timeline.

Then in 1985, Schultz founded Il Giornale which sold brewed coffee and espresso beverages made from Starbucks coffee beans before eventually acquiring Starbucks in 1987.

Now, almost 50 years after the first store opened, Starbucks has over 29,300 stores across the globe and has grown to be the 34 most innovative company in the world, according to Forbes.

According to Business Insider, one of the things Starbucks does better than most competitors is they claim to have over 87,000 possible drink combinations; including their seasonal fall and holiday beverages.

This year, Starbucks released their fall beverages and food, including the Pumpkin Spice Latte and the Apple Cider doughnut, on Aug. 28, according to a Starbucks factsheet.

But Fall did not last long as the Holidays arrived with the Toasted White Chocolate. Mocha and the Snowman sugar cookie, on Nov. 1 and the decor of the stores changed instantaneously overnight, according to Starbucks’ website.

Senior Maria LaMontagne, an exercise science major, will have been a barista at Starbucks for two years in January and said she likes the transition between seasons because of the set-up and festive feeling in each store.

One of the ways Starbucks spread a festive holiday feeling with customers this year was through the limited-edition reusable red cup that was free with the purchase of a holiday beverage on Nov. 2.

Then from Nov. 3 to Jan. 7, customers could take their cup to any participating Starbucks after 2 p.m. and get 50 cents off a grande, 16 ounce, holiday drink, according to a press release.

Wade Bowlin, who has been a barista at Starbucks for five years, said that each store received 400 of the reusable red cups to hand out for the first time ever and his store ran out quick.

“They thought it would be something nice… but when there are a lot of people like at a corporate store, everybody comes by,” Bowlin said. “We ran out at like 9 in the morning. It only took four hours to get rid of them.”

But it isn’t only the promotional deals or festively decorated cups that causes more customers to grab a caffeinated beverage or a sweet treat during the holiday season.

Devon Skunta-Helmink, a visiting associate professor of instruction in the School of Communication, said she is an “avid Starbucks drinker” and notices an increase in the people getting coffee during the holiday season.

“I feel like everyone gets a lot more exhausted with the time change and I’ve been noticing an increase in how many people go there later in the day, where it’s not as normal to get a coffee in the late afternoon,” Skunta-Helmink said.

With the increased traffic of people and new drink combinations offered throughout the fall and winter seasons, the baristas, in turn, have more to memorize and more to do during their shifts.

While some baristas at the Starbucks in Bierce Library enjoy switching from fall to holiday, others believe the added amount of work can be too much to handle at times.

Sophomore Nicole Williams, a business administration major, said that while the formats for making different drinks hasn’t changed, the addition of seasonal flavors has caused more people to order the seasonal beverages.

A few examples of the flavors brought back by Starbucks this holiday season include Peppermint Mocha, Toasted White Chocolate Mocha, Caramel Brulée Latte, Chestnut Praline Latte, Gingerbread Latte and Eggnog Latte, according to a fact sheet.

Sophomore Kylene Brooks, a business major with an emphasis on human resources, said that the worst part of the seasonal change is having different toppings for the drinks.

“The syrups are just like the plain syrups, we’re not mixing anything. But the toppings are like five different toppings for 50 different drinks. It is awful,” Kylene Brooks said.

However, for sophomore Mary Ann Brooks, a psychology major who just joined Starbucks this semester, the variety of toppings and syrups help add to her interest in making and experimenting with different drinks.

Mary Ann Brooks also said one of her favorite parts of the holiday season is having the different seasonal beverages back, including her favorite: the Toasted White Chocolate Mocha.

Whether it be the different holiday beverages or the festive decorations and merchandise in the stores, Starbucks offers something for everyone to enjoy throughout the winter season.