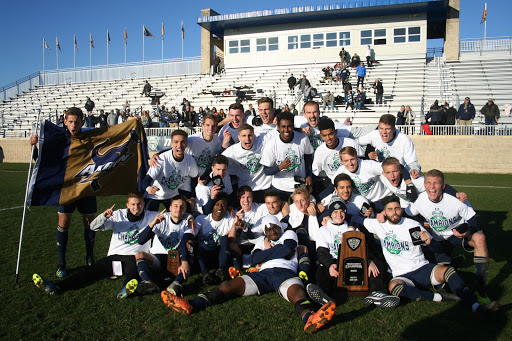 According to GoZips.com, Akron has now won four consecutive games and outshot SIU Edwardsville, West Virginia and Western Michigan by a combined 52-20 margin, including 22-7 on goal, in three MAC Tournament contests.

The win helped come about by junior Marcel Zajac (Mississauga, Ontario) who had two of the three second-half goals.

Along with the two second-half goals, Zajac was selected as the Tournament Most Valuable Player.

While the first half ended scorelessly, the Zips continued their aggressive offense in the second half when Egbo found the net in the 65th minute off a corner kick from freshman Colin Biros (Canton, Ohio) and senior Marco Micaletto (Rome, Italy).

Akron found the net again when Zajac scored in the 84th minute and his fourth goal of the season with his assists coming from Micaletto and Mohamed.

Zajac’s second goal came in the 88th minute when he found an empty net after being assisted by Ezana Kahsay (Asmeras, Eritea).

Akron will face off against in an NCAA Tournament Opening Round game on Thursday, Nov. 15 at FirstEnergy Stadium-Cub Cadet Field. The winner of Thursday’s tournament game will go on to face No. 9 Syracuse.